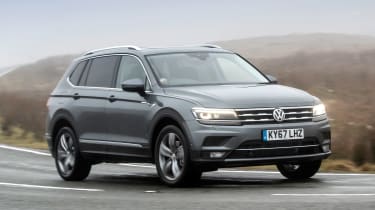 Volkswagen’s longer, seven-seat Tiguan feels at home on UK roads, with solid driving dynamics and a classy feel. The third-row rear seats aren’t really usable for adults, however. This punchy 2.0 BiTDI model looks expensive at nearly £40,000, too, and compared with lesser variants, a Skoda Kodiaq is a better value all-round proposition.

Volkswagen’s SUV offensive will continue in 2018, and joining a growing range is the Tiguan Allspace – a new sister model to the popular Tiguan.

Compared with the regular car, the Allspace sits on a wheelbase extended by 109mm, and is 215mm longer overall. This helps to provide more legroom, a larger boot and up to seven seats. The new model also features a slightly bulkier design, thanks to several styling changes, including a taller-looking bonnet, extended rear doors, a tweaked C-pillar and a slightly altered roof.

The Allspace is expected to account for around 15 per cent of all Tiguan sales in 2018, and will come in three trim levels: SE Nav, the mid-level SEL we have here, and the more sporty R-Line, which will arrive later in the year. 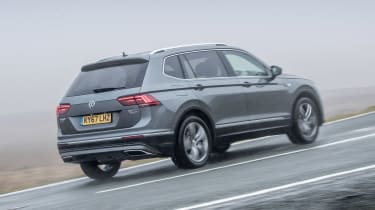 Extra space and practicality are what will attract buyers to this car, especially with seven seats as standard. In truth, the folding third row is only really suited to children; headroom is tight, while there’s not a lot of space for legs, even with the middle row slid forward. Access is fine for kids, but undignified for adults. Second-row passengers fare better, with the extended wheelbase providing an extra 60mm of legroom and 54mm of knee room.

The boot expands to 700 litres with the third row folded, up from 615 litres in the regular Tiguan. It puts VW’s mid-size SUV in touch with the Skoda Kodiaq in terms of practicality, but it still can’t match that car’s 720-litre capacity. The third-row seats in the Kodiaq aren’t for adults, either, but are a little more roomy.

Otherwise, the interior has been lifted from the Allspace’s sister car. The sharp design is assembled well and uses high-quality materials. The eight-inch touchscreen infotainment system is easy to use, and SEL and R-Line cars benefit from the 12.3-inch Active Info Display as standard, replacing analogue dials with a customisable digital set-up.

In fact, all versions are well equipped, with the Allspace only available in SE Nav trim upwards, so even entry-level models get sat-nav as standard.

Both petrol and diesel engine options are available, with the Tiguan’s range-topping, 237bhp 2.0 BiTDI unit reserved for SEL and above. It’s a powertrain that has impressed us before with its punch and refinement, and there’s no difference here. It serves up more than creditable performanceon the road, with a deep well of 500Nm of torque to rely on. It’s an easy car to make good progress in, and it’s respectably refined, too, paired with a smooth, seven-speed DSG transmission. 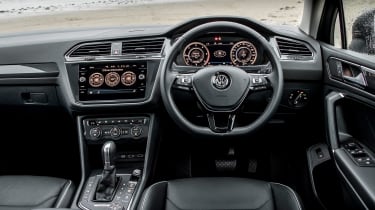 The 0-62mph time of 6.7 seconds is two tenths slower than the five-seat Tiguan’s, while claimed economy only takes a slight dip to 43.5mpg. This Allspace variant weighs in at 1,920kg; that’s 125kg more than an equivalent five-seat Tiguan in the same spec with the same engine. It’s still a controlled, if unexciting, drive despite that, with a decent balance of ride and handling.

There’s one sticking point, however: the Allspace starts at £29,370. That’s £2,645 more than an equivalent Tiguan, which, even on a monthly Personal Contract Purchase deal, looks steep.The Kodiaq, our favourite seven-seat SUV, is more than £2,000 cheaper spec-for-spec, and starts from £24,925.