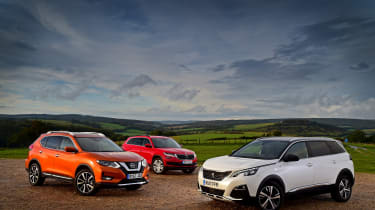 Peugeot’s stock is on the up since the firm revitalised its model range with new SUVs. First came the 2008, and then it transformed the 3008 from a rather dowdy offering to stylish family SUV. Now it’s the turn of the larger 5008.

This seven-seat off-roader blends the practicality of a people carrier with a desirable image, helped by the technology on offer. Add into the mix a line-up of efficient engines – including the 1.2 PureTech petrol we’re testing here – a high-quality cabin and plenty of comfort and refinement, and the car is a real contender.

However, there’s another model hoping to gain a slice of the market. Nissan’s revised X-Trail promises a premium feel and, with the 1.6 DIG-T petrol engine tested, more pace than its rivals.

The car both these newcomers have to beat is the Skoda Kodiaq; Auto Express’s Best Large SUV for 2017. This 1.4 TSI model boasts more power than the Peugeot and plenty of space for a growing family and luggage, so the 5008 and X-Trail face an extremely tough challenge. 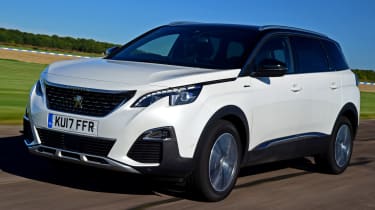 The Peugeot isn’t as sharp to drive as the Skoda, but this family SUV does deliver lots of comfort. Its softer suspension set-up and long wheelbase mean the car smothers worn tarmac, and the good news is that this doesn’t come at the expense of body control, because it keeps movements in check with a refined, fairly plush feel. 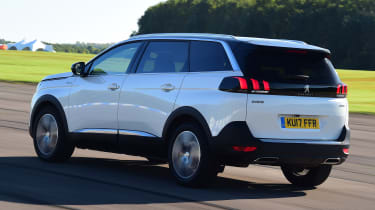 However, there is a downside to this suppleness, because the Peugeot does suffer some roll in corners. To make matters worse, the small steering wheel makes it easy to turn too quickly and upset the car’s equilibrium. Still, there’s a good level of grip given the concessions to comfort.

A big, seven-seat SUV with a 1.2-litre three-cylinder petrol engine might sound like a recipe for slow progress, but the unit’s turbocharger helps to deliver maximum torque of 230Nm from just 1,750rpm, which means the 5008 actually serves up some pretty decent performance.

Although it’s the least powerful car here and offers the least torque, the Peugeot is also the lightest of the trio at 1,310kg. Nevertheless, it was the slowest model on test, accelerating from 0-60mph in 11.1 seconds, and it wasn’t helped by the six-speed manual box’s woolly shifts. Still, it matched the Skoda in nearly all of our in-gear tests. 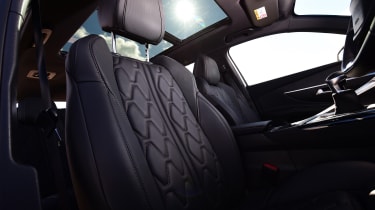 As a result the Peugeot doesn’t feel underpowered, and it’s much more flexible than the Nissan. It’s impressively refined, too; under load there’s a three-cylinder growl adding some character, but it’s not a harsh tone and it settles down at motorway speeds. There’s not much road or wind noise, either.

Testers’ notes: “Four-wheel drive isn’t offered. Instead, Grip Control allows you to change the ESC settings to help off road. It works relatively well for what most owners will need.” 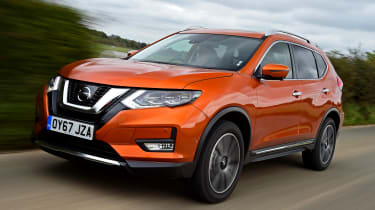 After making some subtle updates to the X-Trail range, Nissan is hoping that its seven-seat family 4x4 can still take the fight to newcomers such as the 5008 and existing models like the Kodiaq in this ever-expanding sector. Priced from £29,350 in N-Connecta trim (although our pictures show a Tekna) with this 1.6-litre turbo petrol engine, the Nissan has power on its side. But is this enough?

The Nissan isn’t as composed as the Peugeot. It’s upset more by bumps and cambers, while the damping means the car reacts more violently to potholes and bumps in the surface – especially at the rear. 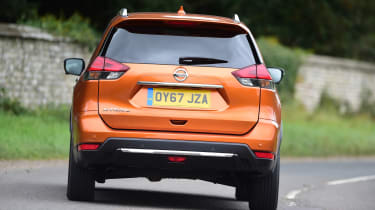 It’s also neither as responsive nor as rewarding to drive as the Skoda. The Nissan’s steering is nicely weighted, however, and although it leans quite a bit when you push it faster through corners, it doesn’t ever feel unsafe; just a little uncontrolled next to its more composed rivals here.

For similar money to the competition you get more horsepower, although the 1.6-litre turbo unit actually delivers 10Nm less torque than the Skoda, and higher up at 2,000rpm.

Despite its on-paper power advantage, the Nissan was actually the slowest car at our test track when it came to in-gear acceleration, taking 13.8 seconds between 50 and 70mph in sixth gear. 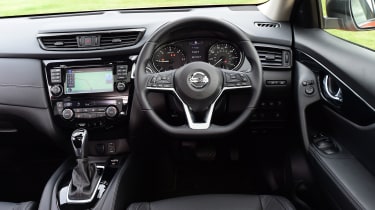 Its 10.2-second 0-60mph time was respectable, but mid-speed flexibility, not flat-out performance, is more important to SUV buyers, and the Nissan’s droney engine lacks punch. The gearchange isn’t as nice as the Skoda’s, either, while the shift action also feels flimsier than the Peugeot’s. Family 4x4s such as these aren’t necessarily the most interesting cars to drive, but the Nissan’s rivals – the Skoda in particular – offer a bit more engagement, which merely highlights its deficiencies in this regard.

Testers’ notes: “These cars will spend most of their time on the road, but if you want four-wheel drive, only diesel X-Trails come with this tech. The same goes for an automatic gearbox.” 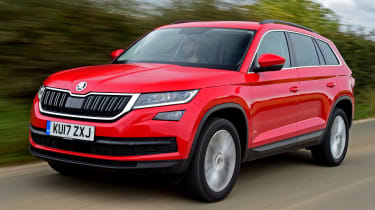 Up to now, the diesel-powered Skoda Kodiaq has fended off all challenges from newer seven-seat 4x4s, retaining its crown as our Best Large SUV. However, here it’s tested in 1.4 TSI form, costing from £27,235 in mid-spec SE trim.

The Skoda is by far the most driver-focused of the three large off-roaders on test here. 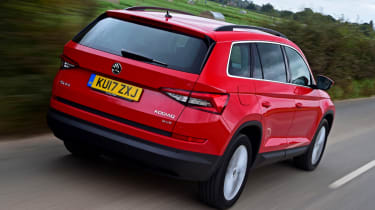 For a high-riding vehicle it corners relatively flatly, with roll controlled fairly well. The steering is weighty and solid, and you can lean on the grippy chassis surprisingly hard. It’s a nice trait if you value driving fun, but many buyers in this segment don’t, and the firmer ride as a result means the Skoda doesn’t offer quite as much comfort as the Peugeot.

However, while the bumps are noticeable, the shock absorbers control wheel movement well, rounding off bumps nicely. Put simply, it’s better damped than the Nissan and offers superior body control compared with the Peugeot, even if the softer 5008 will be the comfier car on long journeys.

The Skoda’s reputation as the sportier model was reinforced by its revvy engine. With 148bhp and the most torque at 250Nm, its 0-60mph time of 9.8 seconds was the fastest on test. It was helped by the tight, mechanical-feeling and nicely precise six-speed manual box that allows fast changes, gaining time on the less accurate transmissions in its rivals. However, even though the Skoda is more involving, the Peugeot was its match when it came to our in-gear acceleration assessments. 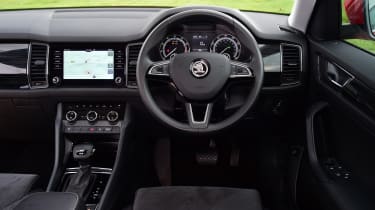 Testers’ notes: “Even in petrol guise, the Kodiaq’s 2,000kg towing limit is the same as the diesels. It’s also the highest of this trio, so if you intend to pull a trailer, the Skoda will be your best bet.” 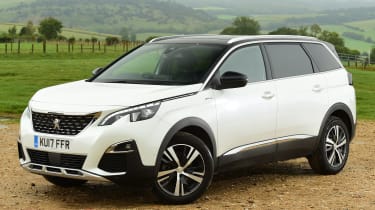 Peugeot’s 5008 has aped the successful recipe of the 3008, adding seating for seven. In this spec it’s more affordable, better equipped and more comfortable than the Kodiaq, and while it’s not quite as good to drive, it’ll be cost-effective to run. Lots of tech and practicality combine with an attractive list price (including PCP) to make this downsized large petrol SUV a likeable choice. 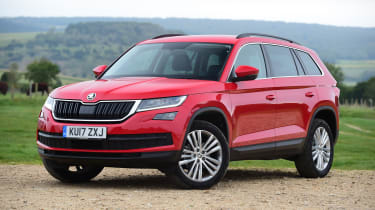 Skoda’s Kodiaq is still the choice for keener drivers. The responsive engine and positive gearbox are good, but the Skoda is still composed and relatively comfortable. It mixes this with usability and tech – although some items are optional on SE trim. With all manual models getting 4x4, CO2 emissions are higher, but the performance benefits aren’t that great over the 5008. 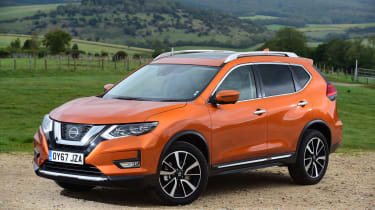 The X-Trail’s updates are too subtle to allow it to compete against two of the best cars in the business here. It doesn’t have such a high-quality feel and is lacking in terms of infotainment. There’s no doubting the Nissan’s versatility, and it even drives acceptably, but that’s not good enough in such a competitive class. These factors combined mean the X-Trail is an also-ran in this test. 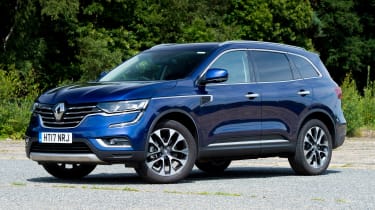 The Koleos is a smart five-seat SUV, scaling up the recipe that won the smaller Kadjar praise. However, unlike its little brother, you can only get this car with a diesel engine, so if petrol power is a must, you might have to look elsewhere. 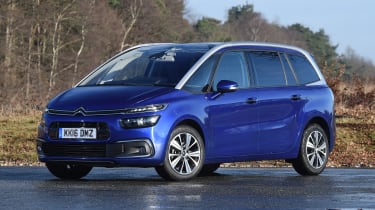 If you need seven seats but style isn’t so important to you, our favourite MPV, the Citroen Grand C4 Picasso, is definitely worth a look. It’s even more versatile than these SUVs, and in Flair trim gets a great level of kit, and you’ll save some cash, too.