While pick-ups become more luxurious, we find out if the rugged new Mitsubishi L200 can become a segment leader 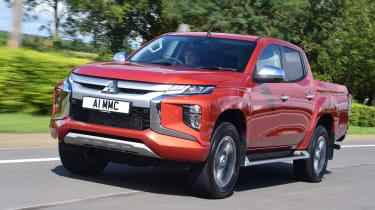 The sixth-generation Mitsubishi L200 was launched a little too late to be considered in our 2019 New Car Awards, but it looks like it could be primed to take class honours from the fantastic Ford Ranger in 12 months time. The L200 combines the demands of pick-up life with impressive road manners, strong equipment levels and competitive pricing. Realistically, it’s a pick-up that buyers of more rugged SUVs could easily move into – and enjoy a VAT break at that.

The UK is Europe’s largest pick-up market. It’s a fact not lost on Mitsubishi; around one in every three vehicles the Japanese marque sells in Britain is an L200. Striding through its 40th year on sale, a new version enters the fray – the sixth-generation L200 gets a bold new look, but it’s not a totally new truck.

In short, it carries over elements of the Series 5 model’s chassis and interior, but receives a new, downsized engine, completely new suspension geometry and a host of new technology and driver assistance features.

The load bed remains the same size: 1,520mm long and 1,470mm wide, meaning available space is par for the course, beating the cheaper SsangYong Musso but not quite sizing up to the Nissan Navara or Mercedes X-Class. However, the difference is almost irrelevant, with just a couple of centimeters in it. As ever, Mitsubishi offers a broad range of bed covers, hard tops and accessories, too.

A Club Cab version with seating for four and an extra long bed (stretching to 1,850mm) kickstarts a slightly revised line-up. We’re driving the larger, five-seat, Double Cab Barbarian X – it’s a new range topping model, equipped with a standard six-speed automatic gearbox and all of the L200’s latest toys.

Among the new features is a blind spot warning system with lane change assist, lane departure warning, hill start assist, rear cross traffic alert, forward collision warning with automatic emergency braking and trailer stability assist. The new tech is all part of Mitsubishi’s efforts to make the L200 as car-like as possible to drive, and in the case of the Barbarian X model, the finish of the cabin reflects this too. 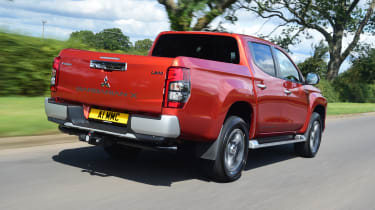 The basics of the interior don’t change compared to the Series 5 truck, and while it doesn’t dazzle with its design, it feels robust and the switchgear is straightforward to operate. There’s plenty of room, too; for a pick-up truck it’s on the money.

It impresses on the move, too. The mechanical underpinnings of pick-up trucks rarely lend themselves to a comfortable ride, but the L200 seems to avoid the worst of the harshness and pogoing encountered in an over-sprung pick-up with an empty bed. That can be put down to the stronger chassis, new springs and dampers with an increased spring rate on the front axle, and a more complex rear leaf spring set-up. The ride is certainly more than acceptable in the context of what the L200 is, in comparison with the Shogun Sport SUV.

The new 2.3-litre four-cylinder diesel engine makes its presence known, but not overly so – and though there’s only 148bhp to tug the two-tonne L200 along, the 400Nm of torque is easy to find. Getting up to speed is no hassle, and it’s a truck that cruises along the motorway very nicely and without undue wind noise, either.

With the arrival of the new engine comes the requirement for Adblue. To make things as straightforward as possible, the new L200 comes with an enormous 21-litre Adblue tank – Mitsubishi claims it’ll only need refilling every 12,000 miles.

The new engine has been homologated under WLTP rules, with Mitsubishi claiming 32.1mpg for manual cars and 29.1mpg for six-speed automatic models – and by and large, they’re figures that should hold up. The L200 emits 206g/km of CO2 (NEDC correlated), though next April, when WLT figures become relevant to the tax man, it’ll jump up to 254g/km. 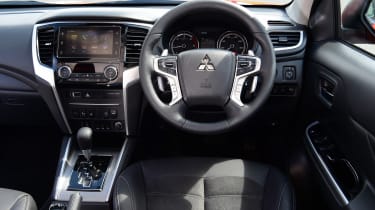 The steering is heavy and the rack is quite slow, so it’s not the most maneuverable pick-up to drive around town. The auto box isn’t the smoothest, which makes its changes feel a little notchy. But trucks like the L200 are hardly designed to be items of high precision, and overall it’s only slightly behind the Ford Ranger for sophistication behind the wheel.

With standard selectable four-wheel-drive, high and low-range gearing, a locking central differential, an enormous spread of off-road modes and hill descent control, it’s still an immensely capable pick-up truck away from the tarmac, too, even on standard road tyres.

As for payloads, the revised suspension and larger front brakes tip the maximum carrying capacity to 1,080kg. Towing capacity for all L200 modes stands at 3,500kg, though only with a three-axle trailer; for a two-axle trailer the threshold stands at 3,100kg. Anything above and you’ll void the warranty.