As pick-ups eat into vans’ slice of commercial vehicle sales, we test the new VW Amarok against rivals from Mitsubishi and Ford 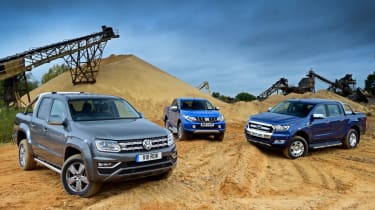 Here in Britain, vans are seen as the default choice for commercial purposes – but pick-ups are gaining ground on them. That’s partly because they are becoming more SUV-like, with the latest batch of models offering greater comfort, technology and practicality than ever before.

Each manufacturer offers only one pick-up in Britain, so keeping these up to date with the competition is crucial – and that’s where this latest Volkswagen Amarok comes in. A new V6-only engine range and tweaks to the equipment available mean the German brand will be hoping the Amarok can defeat our current favourite pick-up, the Mitsubishi L200.

The Japanese truck is a great choice whatever you’re planning to transport, thanks to its well judged driving experience plus a punchy and economical engine.

There’s also an important contender from the maker of Britain’s favourite commercial vehicle, the Transit. Ford’s Ranger, with its 3.2-litre diesel engine, is a match for the powerful new Amarok, while it also gets Ford’s latest infotainment package. The question is, which truck will pick up the win? 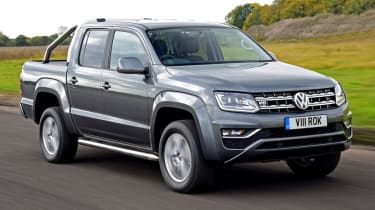 Volkswagen's new Amarok is aimed at the top end of the pick-up market, because it’s only available with a V6 – in two power outputs – and an auto box. Although our pictures show a Highline, the Trendline model we’re testing here starts at £33,487.

The Amarok’s V6 diesel engine is the smoothest, because the four and five-cylinder motors in the Mitsubishi and the Ford are much more rattly and noisy on the move. The eight-speed auto is also a little easier to get along with than its rivals’ units; it shifts smoothly and quickly, contributing to a relaxed feel on the road given that the VW is a commercial vehicle. 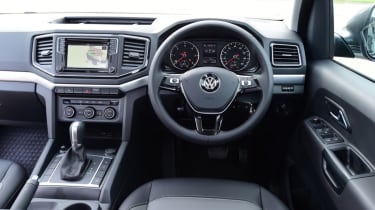 The Amarok is comfortable, too, and while there’s not too much difference between the three trucks on the road, the VW’s more SUV-like driving position and supportive seats make a difference on a long trip, and the low-speed ride is good. However, the rugged underpinnings are still clear – as with its rivals – because when the VW is empty the rear axle in particular tends to pogo up and down.

Where the Amarok has an edge over its rivals is on performance. It stormed through our acceleration tests, covering 0-60mph in a mere 8.4 seconds – over two seconds faster than the Ford Ranger and well ahead of the L200’s 10.1-second time.

What’s even more impressive is the Amarok took only eight seconds to go from 30-70mph through the gears, whereas the L200 completed the test in 9.7 seconds and the Ranger in 11 seconds. The VW is helped by having more ratios in its transmission and the fastest-shifting box, but it also means the truck feels genuinely fast on the road. It makes towing heavy loads or trailers easier, too.

“You’ll have to spend more cash to get the VW up to the same level of kit as its rivals; its heated seats and sat-nav are standard fit on the L200 and Ranger.” 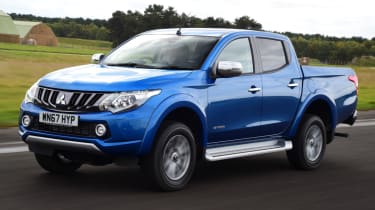 The Mitsubishi L200 is our current favourite pick-up truck, so it’s the model that the Amarok has to beat. We’re testing the L200 here in top-spec Barbarian trim and double-cab form. It’s fitted with Mitsubishi’s automatic gearbox, which is the closest match to the new Amarok on price at £32,760.

The lighter kerbweight means the Mitsubishi feels a little more eager on the move than the Ford, even if it can’t match the VW’s impressive performance. The engine is as rattly as you’d expect of a powerful four-cylinder turbodiesel, but it’s actually smoother than the Ranger’s five-cylinder and better isolated from the driver. It’s a shame that the automatic gearbox is only a five-speed, well behind the six and eight-ratio units in the Ford and VW respectively, but the L200 is still a respectable cruiser.

More compact dimensions than its rivals’ give you extra confidence on tighter roads. The steering is slow and the softer chassis does roll over noticeably – but all the trucks here are guilty of that. 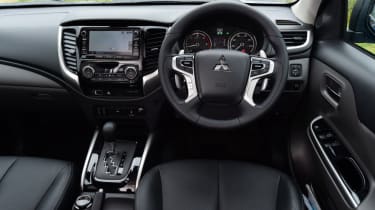 The L200 fell behind the Amarok in our performance tests, yet was quicker than the more powerful Ford. In third gear it took four seconds to go from 30-50mph – one second slower than the Amarok but one tenth faster than the Ranger. The low-down torque and low kerbweight meant it completed the same sprint in fourth in only 4.4 seconds, well ahead of the Ford’s 5.3-second time.

The Amarok’s 3.1-second result is even more impressive, but regardless, the Mitsubishi offers more than enough grunt to deal with the daily grind of towing or load carrying.

“The L200’s 75-litre fuel tank is a bit smaller than the 80-litre one in its rivals, but even so you’ll fill up at around the same point as the VW and less frequently than the thirstier Ford.” 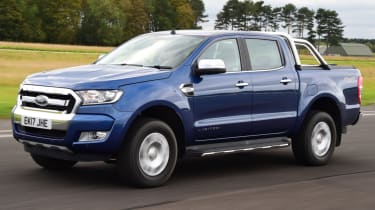 The rugged Ford Ranger comes as a regular, super and double-cab model, and we’re driving the latter to match its two rivals. We test a top-spec Wildtrak, which costs from £35,205 with an auto box (although the model in our pictures is a Limited).

Neither of our pick-up rivals is great to drive, but although the Ford has a brawny feel thanks to its torque-rich 3.2-litre five-cylinder turbodiesel, it feels every bit of its 2,211kg kerbweight. It can’t match the Amarok when it comes to agility or precision on the move – even though this is all relative.

While the 470Nm torque figure is strong, the Ford’s weight and sometimes slow-witted automatic gearbox mean it falls behind its rivals when it comes to performance. Our in-gear trials found it lacking compared with the Amarok and L200, especially at high speeds. 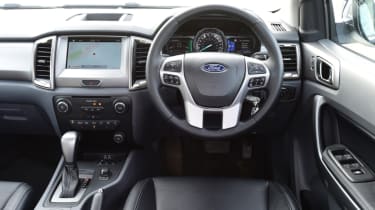 In our 50-70mph test, the Ranger recorded a time of 8.1 seconds in fifth gear, while the L200 managed seven seconds flat and the Amarok just 4.7 seconds. The Ranger was slowest from 0-60mph as well, taking 10.8 seconds. Still, it doesn’t feel like it’s lacking pace, mainly because the torque ensures the truck makes relaxed and adequate progress. The Ford isn’t quite as comfortable as the L200 or Amarok on the motorway, although it is a little quieter than the Volkswagen at high speed.

Generous ground clearance of 229mm and four-wheel-drive traction helped the Wildtrak perform well in our off road tests, and the 800mm wading depth means there’s more scope for deep-water excursions in the Ranger than in either rival.

By comparison, the off-road settings for the Amarok’s permanent four-wheel-drive system are more limited, but all three trucks are versatile off the tarmac and should offer enough traction when the going gets tough.

“The Ranger’s £1,350 Driver Assistance Pack adds adaptive cruise control as well as lane keep alert and assist, which are hi-tech features for a pick-up truck.” 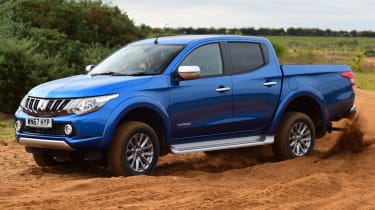 Yet again the L200 sees off some talented rivals to retain its crown as our best pick-up. That’s thanks to its excellent value; not only is it the cheapest truck of this trio to buy, it’s also the most economical to run. It adds a long list of standard equipment and decent refinement to its list of positive traits, while it delivers the versatility and rugged ability that any pick-up should do. 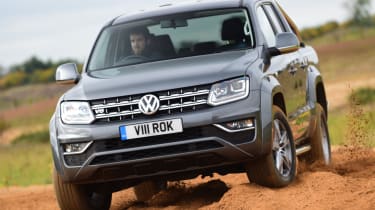 Strong performance, plenty of refinement and a high-quality cabin combine with respectable fuel economy, a big load bay and high payload capacity in this premium and practical pick-up. Add optional sat-nav and the Amarok is still cheaper than the Ranger, while it’ll be nicer to live with and crucially work with, helped by its lower running costs in comparison with the Ford. 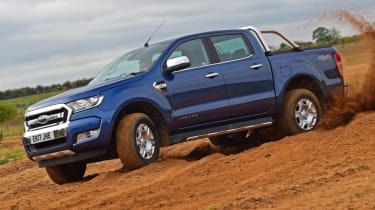 A top towing capacity, good off-road ability and impressive level of equipment are positives for the Ranger. However, the higher running costs will eat into your profit margins as a working vehicle, which is key. The Ford doesn’t really offer any more than its rivals in the way of practicality, either, and while the engine is strong, it’s not as refined as those of its competitors here. 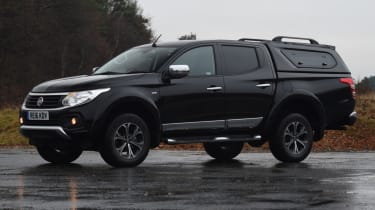 Fiat’s Fullback is one of the newest pick-ups around, and since it uses most of the same drivetrain and chassis parts as the L200, it’s another top truck. There’s lots of kit, plus strong pace with power from the Mitsubishi’s 2.4-litre diesel engine. 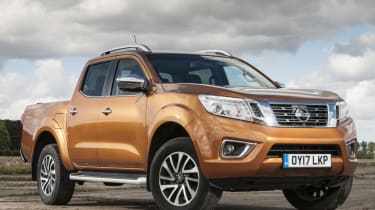 The latest Nissan Navara marks itself out from the pick-up pack with its multi-link rear suspension, which makes it feel more like an SUV on the road. However, it’s not that much better to drive, even if it can tow up to 3,500kg.