Mercedes wants to redefine the pick-up market with the X-Class, but it’ll have to beat the Nissan Navara and VW Amarok first 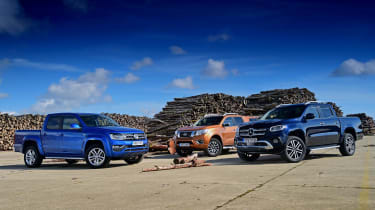 Plenty of cars are launched with the promise of redefining the market in which they compete, but in the case of the new Mercedes X-Class, it could possibly achieve it.

It’s the company’s first double-cab pick-up truck, and it’s aiming to make the sector even more premium. However, it’s not the first truck that has claimed to offer a less utilitarian driving experience than the norm.

The Volkswagen Amarok arrived in 2010 with a classy cabin and more refined manners, while the current model (revised in 2016) is the only double cab available with a V6 diesel. For the X-Class’s first test, we’re comparing the top-spec four-cylinder X 250 d Power with the 201bhp Amarok V6 Highline, so they deliver similar performance, although the Mercedes is pricier.

If the X-Class looks familiar, that’s because it uses the same platform as the Nissan Navara, which we’re also including to test the family ties. The running gear is largely the same, but Mercedes has tried to distinguish the X-Class with its own look.

We’ve brought along a top-spec Navara Tekna to see whether the sizeable price difference between the two flagship models is justified. 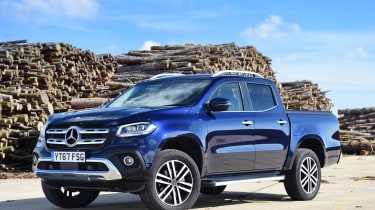 The X-Class combines the utilitarian appeal of the Mercedes commercial vehicle range with the premium quality of the brand’s road cars. There are two engines: the 161bhp X 220 d manual or 187bhp X 250 d auto tested here. Prices start from £32,772 (including VAT), although that’s still more expensive than the top-spec Navara Tekna with a manual box.

The feeling of quality that the X-Class exudes continues when you’re driving it. All one-tonne pick-ups have compromised rear suspension settings to support a heavy payload, so a certain amount of ‘bounce’ is to be expected when they’re unladen.

However, Nissan took pride in fitting the Navara with multi-link rear suspension, as opposed to a traditional leaf spring set-up, and yet Mercedes has developed matters further so that the X-Class does a far better job of delivering a smooth ride. 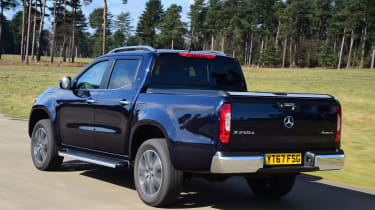 It still bounces, but it just feels more consistent. If the front end is unsettled, then the rear will behave in the same manner, without any extra bucking due to the unladen bed. The suspension is much smoother over bumps, too, even though the X-Class tested here featured larger 19-inch wheels compared with the Navara’s 18-inchers. These did make a bit more road noise when cruising, although you’d hardly call it harsh. In corners the Mercedes rolls, but it feels more stable than either rival here, while the light steering means it’s easy to manoeuvre at low speeds.

The X 250 d has the same 2.3-litre four-cylinder diesel as the Navara, but with a 14bhp power deficit to the Amarok V6, as well as 50Nm less torque and extra kerbweight to haul around, it was roundly beaten by the VW in our performance tests. Still, these trucks aren’t designed to win drag races, and the X-Class feels more than quick enough in isolation.

Testers’ notes: “Like its rivals, the X-Class has a wide range of accessories to boost its versatility. There are roll bars, tonneau covers, hard tops, cargo rails, load liners, tow bars and roof rails on offer.” 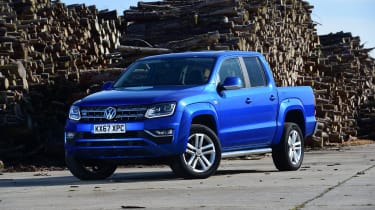 When the Volkswagen Amarok arrived in 2010, it raised the bar for car-like luxury in the pick-up truck sector. Like the X-Class, it’s only offered with a five-seat double-cab body, but prices start from a slightly lower £30,455. Here we test the Highline model with VW’s 201bhp 3.0-litre V6 diesel.

Until the Mercedes X 350 d arrives later this year, the Amarok is the only V6-powered double-cab pick-up truck on sale in the UK. It certainly adds to the driving experience, because it’s smoother, more powerful and more responsive than the four-cylinder engines found in its rivals here. 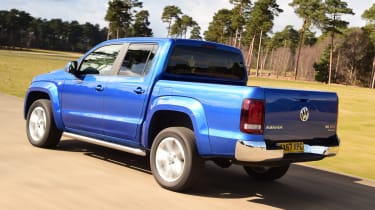 With 201bhp and 500Nm of torque, it’s a real powerhouse, and the Amarok walked all over its rivals in our acceleration tests. It managed 0-60mph in nine seconds flat, which was 2.4 seconds ahead of the X-Class. That’s pretty impressive for a vehicle as big and bulky as this, and the Amarok will take other road users by surprise at the traffic lights. Fast but smooth shifts from the eight-speed auto helped it rattle through the gears, while having all that torque from 1,250rpm helped in-gear performance, too.

Cruising comfort is good, but there is a greater tendency for the Amarok’s rear end to bounce over bumps than in the X-Class. Our car’s 19-inch wheels featured lower-profile rubber than the Mercedes’, so the ride felt more unsettled at lower speeds, too.

However, as soon as you put anything substantial in the load area, the back end of the Amarok settles down nicely, delivering the kind of smooth and comfortable ride for which a leaf-spring set-up is designed. If you’re planning on heading off the beaten track in the Amarok, we’d recommend upgrading to a set of off-road tyres. Summer rubber is fitted as standard to help fuel efficiency, and the limits of these tyres will stop you well before the truck’s 4MOTION system is overwhelmed. 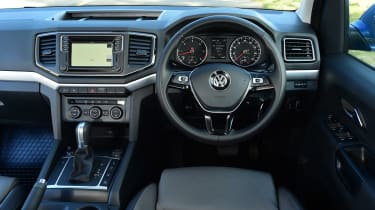 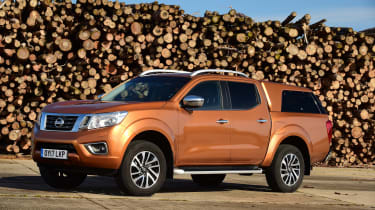 While the Navara name can trace its roots to the early nineties, the third-generation model is a thoroughly modern pick-up. It’s offered in a variety of bodystyles, although the double cab is the one that’s geared towards work and play. Here we test the top-spec Tekna automatic model.

Fire up the Navara’s big-capacity four-cylinder diesel, and it starts with a surge of mechanical and transmission noise, but it soon settles once warm. The Mercedes does the same, although with less sound deadening in the Nissan, the noise is more pronounced. Neither truck sounds as refined as the V6 Amarok at idle. 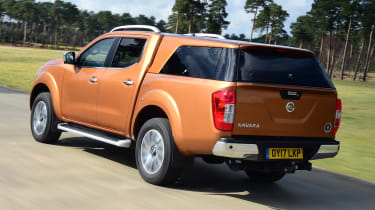 The Navara uses the same automatic gearbox as the X-Class, and it’s equally smooth and unobtrusive in its operation, with no jerkiness when it kicks down. You can sometimes confuse the electronics into holding on to a lower gear for too long, but otherwise the transmission is a slick performer.

Our figures here are for a manual model, but performance from the six-speed manual is on par with the X-Class. With the same torque output, the Nissan was just as fast in the lower gears and slightly quicker in the higher ratios (although it’s shorter-geared), and doesn’t lack poke.

While Nissan is rightly proud of its multi-link rear suspension set-up, the arrival of the X-Class demonstrates that the Navara is only slightly ahead of the rest of the pick-up pack for ride quality. It still bobs up and down at the rear over big bumps, while the suspension sends shudders through the frame when it hits a large imperfection. 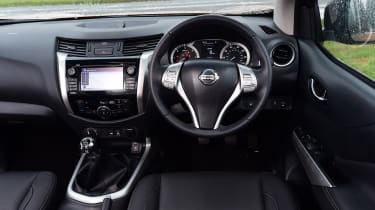 Testers’ notes: “As well as the X-Class, the Navara is the donor model for the Renault Alaskan. It’s already on sale in Europe, and is due in showrooms here later this year.” 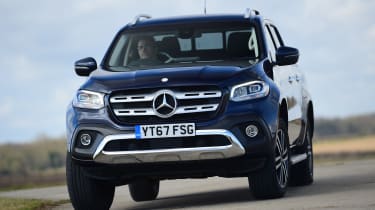 The X-Class’s mission was to take the pick-up sector even more upmarket, and it’s succeeded. Its Nissan roots are all but eradicated, because it has the kind of quality and prestige found in Mercedes SUVs, and it’s the best-riding truck we’ve ever driven. Yes, list prices are higher, but it’s actually the best workhorse, too. If it’s your business vehicle, this is a lot of car (or truck) for the money. 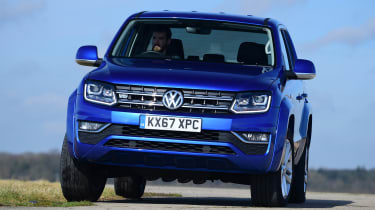 The X-Class sets the benchmark for quality in the class, but that doesn’t mean the Amarok should be overlooked. The big V6 under the VW’s bonnet is a real powerhouse that delivers addictive acceleration and pulling power, while its slightly larger load bay and more generous kit count stand it in good stead. Even so, as a premium pick-up, it can’t hold a candle to the newcomer. 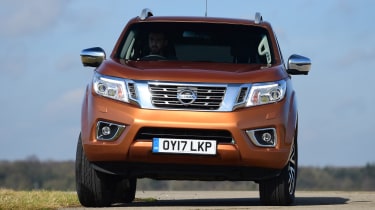 We included the Navara here to see how much of a premium feel it had next to its new sibling, and it’s given a clear indication of where the X-Class improves on Nissan’s existing attractive formula. But look at the star ratings; it’s a great-value pick-up that will take the rough and tumble of family and work life, offering plenty of performance and practicality. It’s still a front runner. 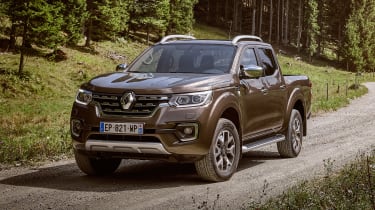 The Renault Alaskan is the third pick-up in the Nissan/Mercedes family, so it should boast similar qualities at affordable prices, breaking new ground for the French firm. It’s due on sale in the third quarter of this year.