The Mercedes X-Class brings a touch of luxury to the pick-up sector, but how does it drive? 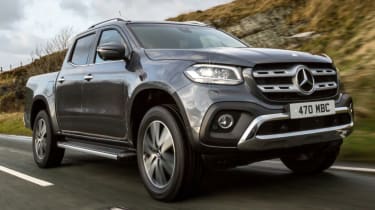 Put simply, in the new X-Class, Mercedes has the best UK market pick-up truck on its hands. It just comes at a sizable price. Compared to the top family SUVs, there’s still roughness around many of its edges so, like other high-end pick-ups, the X-Class only starts to shine when the company car tax and VAT savings attached to running a commercial vehicle come into play. For the target market of fleet customers and businesses, Mercedes’ truck offers a level of desirability that rivals can’t match, that’s why plenty will deem the premium worth paying.

Mercedes has taken the opportunity to plug one of the increasingly rare gaps in its sprawling product portfolio by entering the global one-tonne pick-up truck market with the X-Class. It joins the three-pointed star commercial vehicle range in the UK where the favourable tax classification for double-cab trucks should see it strike a particularly resonant chord with small business owners and company car users.

On the face of it, Mercedes’ plan with regards to the X-Class looks watertight. One-tonne trucks are big business globally and burgeoning markets in Russia, South America, South Africa and Australia top the new truck’s hit list. Mercedes has the SUV, off-roader and commercial vehicle expertise to make a good fist of a utility vehicle offering a versatile blend of qualities, too. What could go wrong?

It’s a good question but our first drive of the X-Class - in Chile no less - did throw up a couple of possibilities. Now we’ve tried the truck in the UK for the first time to find out how it really compares to established rivals like the Mitsubishi L200, Toyota Hilux, VW Amarok and Nissan Navara. 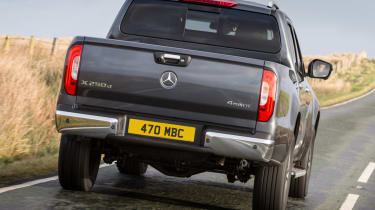 And the Navara is the interesting one here because rather than bringing exclusively and its own technology to bear on the X-Class, Mercedes struck a deal with the Renault-Nissan Alliance. As a result, its new truck shares a platform with the Navara, and its sister vehicle the Renault Alaskan. At launch, the engines are the same, too.

Although Mercedes points to numerous changes it’s made to differentiate the X-Class, both mechanical and cosmetic, this is the challenge it faces. Can it convince the UK market that it’s worth the premium Mercedes is charging over other pick-up options?

The X-Class opens at £32,772 for the entry-level X 220 d variant in Prime trim so you can get a Nissan Navara with the same engine and similar specification for over £6,000 less. 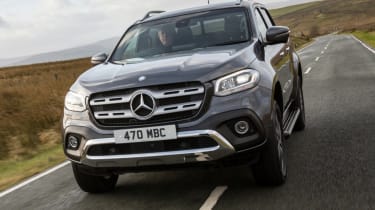 So the X-Class isn’t cheap but it has a jolly good go at justifying its price tag. Mercedes is fond of telling us that the X-Class is the first pick-up from a premium manufacturer and, we have to say, it does look the part. The bold three-pointed star at the centre of the grille, the squinting headlamps and the big wheel arches that flare to encase a track that’s wider than the Navara’s all add to the truck’s imposing presence on the road.

Inside, the top part of the dash draws elements from the Mercedes passenger car parts bin with a slick instrument cluster, leather-trimmed steering wheel and the now-familiar air vents modelled on jet engines. All models also get a seven-inch central display screen with menus controlled by a dial on the console between the seats. As you ascend the range, increasingly upmarket materials and finishes are added to the point that this commercial vehicle successfully mimics the look of one of the brand’s passenger SUVs. 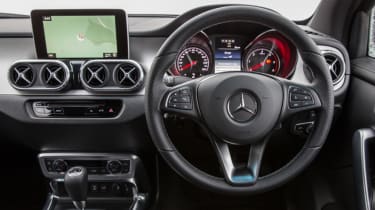 But it doesn’t quite pull it off. Look lower on the dash, around the gear shifter or down the door inserts and you’ll find some less-than-classy plastics, not to mention switchgear that reminds you of the X-Class’s Nissan roots. There’s a lack of storage space aside from the central bin and shallow door pockets, too. This is the best quality interior in a UK market pick-up truck by some margin but it falls below premium passenger car standards.

That’s also the story elsewhere with the Mercedes X-Class. As well as widening the track, Mercedes has retuned the suspension and added significant strengthening to the chassis. It shows on the road where the big Mercedes controls its weight through direction changes and over undulations extremely well compared to its pick-up rivals.

The steering weight is well judged and there’s none of the vagueness some trucks suffer from. The extra soundproofing has paid dividends, too, because little diesel rumble makes its way into the cab and wind noise at speed is well contained.

On the downside, that traditional jittery pick-up ride over poor road surfaces persists and performance, even from the more powerful four-cylinder engine, won’t raise any eyebrows. Although the seven-speed gearbox is smooth, it’s sometimes slow to change down and throttle response isn’t particularly sharp. 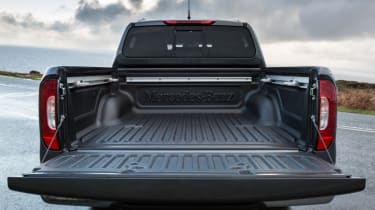 0-62mph takes 11.8 seconds while the top speed is 109mph and that’s for the 2,234kg X-Class on its own, without any of the 1,066kg permissible payload on board. That substantial kerb weight doesn’t help economy with a 35.8mpg figure lagging behind the equivalent Navara’s 40.4mpg. At least extra grunt is on the way in the form of the X-Class X 350 d and its V6 diesel that's set to arrive in mid-2018.

Otherwise, the Mercedes X-Class is one of the most practical double-cab trucks on the market with a three-seat rear bench that can accommodate two 6’ passengers behind front seat occupants of the same stature. The load bed is usefully square, 1,587mm long and 1,569mm wide, helped by the fact that the X-Class is 40mm longer than the Nissan Navara. The truck can tow a 3,500kg braked trailer and there’s a slightly odd electrically-operated hatch in the cabin’s rear window that longer items, or the dog’s head, can poke through.