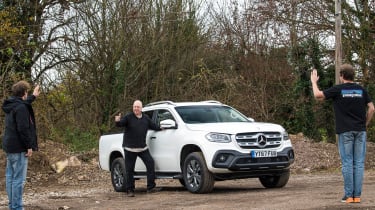 A minor fault with the load bed cover hasn't dented our enthusiasm for the big Mercedes pick-up, which does so much so well that we can ignore niggles with tricky or missing creature comforts. It's pricey, though.

As the products editor at Auto Express, I don’t often get to drive supercars or exotic models, nor do I usually experience the kind of forecourt and car park attention such models attract – but our Mercedes X-Class is giving me a taste of it.

I’ve never run a model on the fleet that has generated such interest, and it seems this is all down to that big three-pointed star on the X-Class’s grille.

Some people are amazed that Mercedes makes a pick-up at all, while others simply want to know what it’s like. Then there are the seasoned truck users keen to find out if this should be their next workhorse. 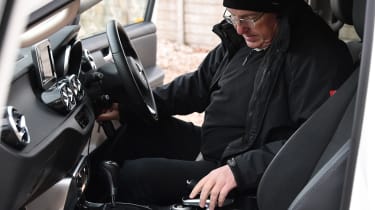 That shows the power of the brand at work, because I know a few Nissan Navara owners – the model on which the X-Class is based – and it doesn’t get anywhere near the same attention, despite being physically similar.

The short answer to those wanting to know what it’s like is that the premium pick-up is pretty good – if you’re prepared to pay the premium the badge commands.

The Mercedes’ main tangible benefit is a ride that makes competitors look like the commercial vehicles they are at heart. Its suspension has a composure that takes the strain out of long journeys; a 450-mile weekend trip to Wales was no hardship in the Mercedes’ comfortable cabin. And while a loaded trailer calms a fidgety ride in rivals, in the X-Class it sometimes unsettles the pick-up over bumps as it would in a conventional tow car.

That’s easy enough to overlook when you’re driving the truck every day, though. It’s not as comfortable as the best SUVs of a similar size, but the truck is significantly smoother than an equivalent Volkswagen Amarok or Ford Ranger, for example. 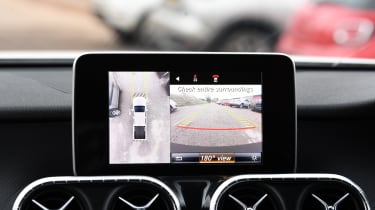 It’s easy to drive, with well-weighted steering and good visibility from the high driving position. The smooth engine and automatic gearbox are both quiet on the motorway, too. In addition, with 187bhp available, the 2.3-litre motor pulls strongly even when you’re towing a heavy load.

The big Mercedes is less happy in car parks and tighter roads, though. It’s not helped by a large turning circle, which makes manoeuvring pretty difficult at times. However, the 360-degree parking camera, which is part of the £1,128 Parking Package, helps protect our truck’s shiny metallic paint from getting scratched.

Those expecting the full Mercedes technology experience in the cab will be disappointed, though. There are obvious elements that have been sourced from elsewhere in the marque’s range, such as the infotainment system, but bits of the Nissan Navara remain inside. While hard plastics are hardly a rarity in a truck, owners of Mercedes SUVs might expect a more premium palette of materials to be used in the cabin of this pricey pick-up.

I’m still getting to grips with the infotainment set-up, although I’m not exactly enamoured with it so far. I still don’t find it very easy to navigate, and without Apple CarPlay and Android Auto, its smartphone connectivity is lacking. 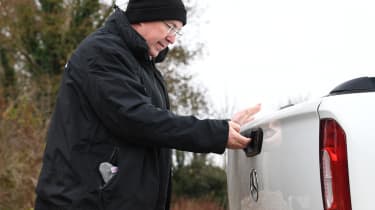 In this mid-range model, despite options totalling more than £8,000, you also have to use keys for everything including the tailgate, which is not part of the central locking. That can be irritating when you have hefty kit to put into the spacious bed.

Those are small niggles and we’ve only found one real fault so far. We suspect the roller shutter tonneau has moved or wasn’t fitted correctly, because it leaks and the tailgate needs a little pressure before the handle releases. It should be easy to fix, however. 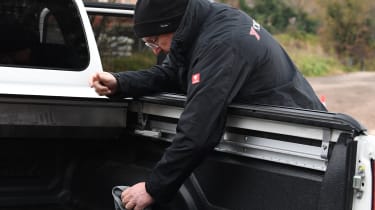 I’ve done just shy of 2,500 miles in only 10 weeks, which shows how much I’ve enjoyed using the big X-Class. Sometimes driving a truck can take a bit more effort than you’re up to, but the Mercedes makes the experience as pleasant as it’s surely possible to be without sacrificing the most important features every truck needs.

The X-Class has a 2.48m2 load bay with a payload limit of just over a tonne. I’ve never needed to carry that much weight in the back, but that’s good to know for those who are planning to use it as a commercial vehicle. 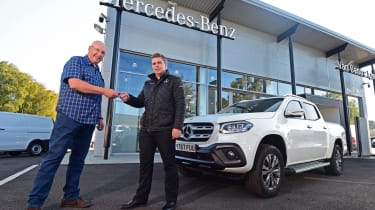 Mercedes is aiming to fill a gap in the global market for a premium pick-up. Its new X-Class is loaded with kit from its upmarket SUVs and saloons, to appeal to business and fleet users who wouldn’t normally give a truck a second glance. Naturally there’s a price to pay – in this case, it’s £36,612 plus options. We’re planning to see whether the X-Class is a good investment as the new premium pick-up joins our fleet.

We collected our car from sales executive Craig Guzzardi at the Orwell Van Centre, near Ipswich, Suffolk. Craig was very helpful, and showed us everything we needed to know about the X-Class. Our X 250 d has a 187bhp 2.3-litre four-cylinder diesel engine and a seven-speed automatic gearbox. It’s very much the mid-range model, because there is a lower-powered version of the same engine available, as well as a muscular V6 diesel.

Our Progressive spec includes alloy wheels, automatic wipers and electric heated mirrors, as well as a long list of optional extras. Firstly, there is the bering white metallic paint and 18-inch alloys (upgraded over the standard 17s), as well as the tinted rear windows and anodised roof rails of the Style pack (£2,628). 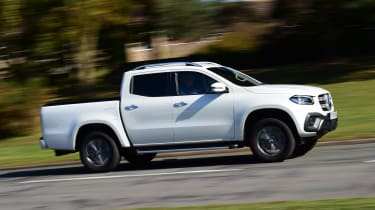 Then there’s the Comfort pack (£1,482), which adds electric seats, climate control, LED headlights and a man-made leather interior using a suede-like material. It looks and feels just as upmarket as the real thing, but saves the animals – and the planet – a lot of trouble, so we’re fans of that feature.

Add the Winter pack (£408) and those seats are heated, as are the washers, plus our truck has the 360-degree camera Parking pack (£1,098). Large vehicles such as this are tough to park accurately, even when you’ve been driving them for years as I have, so it’s useful to get a 360-degree view of the pick-up from above.

As we intend to use the X-Class for the purpose it was built – to tow and carry big loads – there is a tow bar and a retractable load bed cover to keep our track tools and tyres safe and dry. The final £45,217 price is close to that of the flagship Power, but we’ve spent nearly £8,500 to get it there.

Craig also took us through the Audio 20 infotainment system – which was helpful, because it isn’t the most intuitive set-up. Owners of previous Mercedes will be familiar with the click-wheel control in the centre console, but with multiple inputs available from that and the touchpad, it’s easy to make errors. My colleagues in the office tell me it’s simple enough to get used to, though, so hopefully I will be flicking through the menus with ease before long.

Oddly for an upmarket vehicle there’s no Apple CarPlay or Android Auto, but you can use your phone as a music player via USB or Bluetooth, plus there’s hands-free calling as you’d expect. The USB port is in the centre armrest, which unfortunately means running a lead along the console and across the dashboard if you want to mount and charge your phone while driving.

For those who have yet to embrace the MP3 revolution, the system also has a CD player – remember those? And if you don’t have a navigation app on your smartphone, you can use the built-in sat-nav sourced from Garmin. 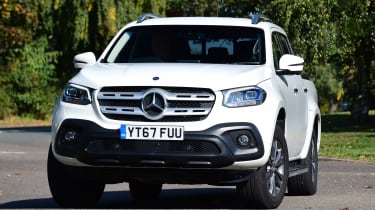 We haven’t been running the X-Class for long, but from the first mile you can tell it’s a step above its pick-up rivals. While the running gear and chassis are from Nissan’s Navara, Mercedes has done more than simply upgrade the trim and slap a badge on the grille.

It’s worked its magic on the ride; this is the best in class, with the crashing and shuddering of competitors all but eliminated. The X-Class has a well-damped, smooth ride, and even body roll when cornering is minimised.

Is that worth the premium price alone? We’ll be aiming to find out over the next few months.