The Mercedes X-Class is the most powerful pick-up in the class, courtesy of its punchy 6-cylinder diesel engine 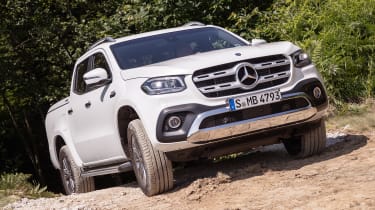 The X 350 d is all about the brawn, and there’s no doubt that the power it packs is appealing. It’s also a great cruiser, and maintains the X-Class’s position as the most refined and comfortable pick-up currently on sale. But the sub-one tonne payload means it loses out with commercial vehicle drivers, while the price tag has the potential to keep private buyers away, too.

When the Mercedes X-Class pick-up was launched last year, it hit the ground running thanks to the fact it was developed from the Nissan Navara. It came with a pair of potent four-cylinder diesel engine options, but now the X-Class has been given more power to pull ahead of the pick-up truck pack, courtesy of a V6 diesel motor.

Engineers have taken the 3.0-litre single-turbo diesel normally found in the E-Class and fitted it to the X 350 d. They’ve also added a seven-speed auto box, permanent four-wheel drive, and selectable drive modes to help put the power down. The truck gets a Volkswagen Amarok-matching 254bhp (as well as 550Nm of torque), which means it’s capable of 0-62mph in 7.2 seconds and a top speed of 127mph.

Permanent four-wheel drive is a first for the X-Class, because other models in the range use a selectable system. There are three modes on offer; 4MAT for tarmac use, 4H for off-roading, and the low-range 4L mode for seriously rough terrain. In 4MAT mode, power is split 40:60 front to rear, while a rear diff lock is also included with hill descent control for improved off-road responses. The 350 d also gets Dynamic Select drive modes, with Comfort, Eco, Sport, Manual and Off-Road settings that can be selected on the fly, although the Off-Road setting only works in 4H or 4L modes. 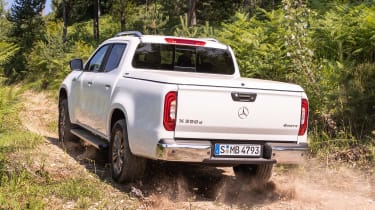 The X-Class V6 doesn’t get substantial visual changes over its four-cylinder counterparts – the only clues to the new engine is the ‘V6 Turbo’ lettering emblazoned on the front wings and the X 350 d badge on the tailgate. But the mild tweaks are no bad thing, because the X-Class is a handsome looking truck, with more in common with the Mercedes passenger car range than the Navara on which it’s based.

It’s the same story inside, as Merc’s tablet-style infotainment screen sits in the middle of the dash. As usual, the COMAND control wheel is placed on the centre console, while the rotary air vents all give the X-Class an upmarket feel. The quality of the cabin is a step ahead of every other pick-up truck in the class – and with the V6 model offered exclusively in Power trim in the UK, buyers won’t be left wanting for kit, either.

On the road, the V6 packs real punch. Floor the throttle, and the seven-speed gearbox kicks down a cog and the big V6 roars into life. The soft suspension makes the nose lift and rear end squat at the same time, giving the X-Class the feel of an old-school grand tourer. Mercedes also allows you to use the 7G-Tronic box in manual mode via shifters on the steering wheel – and it’s a proper manual, too, because it holds the gear you’ve selected and won’t kick down, no matter how hard you stamp the throttle.

So the X-Class V6 is a lot of fun, but don’t expect it to back this up with sports car handling. The steering is very light for such a big machine, and there’s not much feedback through the controls, either. The soft suspension means it pitches, rolls and wallows in corners if you try to push the limits, too.

This means you need to slow the X-Class down to conventional pick-up truck speeds for the corners, which results in you working the brakes pretty hard in preparation. And with a long pedal and a lack of bite, they feel like they’re struggling to bring this huge machine to a halt particularly quickly. 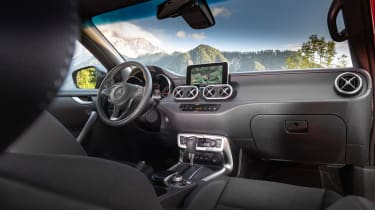 Where the X 350 d really makes sense is on longer journeys. With the gearbox in auto and the Dynamic Select system in Comfort, the X-Class turns into a fast, refined machine that eats up miles with ease. Just like the rest of the X-Class range, this V6 version is easily the most comfortable pick-up on sale.

Mercedes’ engineers have given it the kind of ride comfort that rival trucks can only dream of, and there’s none of the rear-end ‘bounce’ that they suffer from when the X-Class is unladen. Combine this with the engine’s instant response and the lack of road or wind noise, and the X-Class is a capable long-distance cruiser.

There are a couple of issues with the X 350 d, though. Firstly, it doesn’t have the required one-tonne payload needed for a double cab pick-up truck to qualify for light commercial vehicle company car tax in the UK, so it will be more expensive for business users to run than a four-cylinder X-Class. Secondly, there’s the price. This has yet to be confirmed by Mercedes, but with the current top-spec four-cylinder diesel costing £40,920, it’s going to be steep. That puts the X-Class on a similar footing to the Mercedes GLC 350 d, and even when you consider the potential VAT savings, it might take some convincing to get buyers to opt for this truck instead.