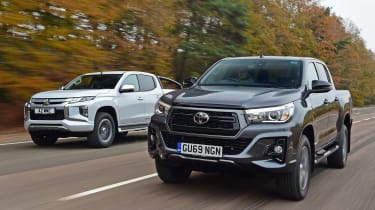 Pick-up trucks used to be workhorse alternatives to a van for tradesmen needing some off-road ability, but as SUVs have become more popular, manufacturers have refined their pick-up offerings to make them more usable on a daily basis. They also have some interesting financial incentives, as we’ll see later in our test.

However, ability hasn’t been sacrificed and the pairing here are more capable machines than ever. Payload and load bed size will be big factors in deciding the winner, along with fuel economy (and how much it might eat into your profit margin), infotainment, kit and cost, while factors like refinement and ride also matter more than ever in this class. 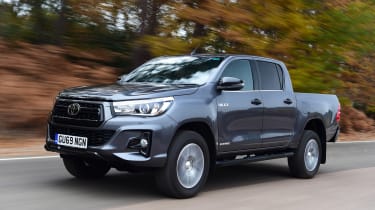 For: Lots of equipment, cheaper than the Mitsubishi, impressive workhorse ability.Against: Slower than L200, imprecise steering (but it makes it good off road),

It’s no surprise that both these pick-up trucks use ladder-frame chassis, because this is the best method of construction for vehicles that’ll carry big loads and will frequently be used off road. Although having such a chassis does mean some compromises to its on-road manners, the Toyota is the more settled machine of the two.

The ride quality really is good and it gets better still once you load the bed up with some ballast. It means the back axle feels less bouncy, but even so, the Hilux absorbs bumps better than the L200, which shimmies and shakes on all but the smoothest road surfaces.

The Hilux lost out in our straight-line speed assessments, partly due to its gearbox, because the Toyota’s 2.4-litre four-cylinder turbodiesel engine produces an identical 148bhp and 400Nm of torque to the L200. It is slightly heavier, though. 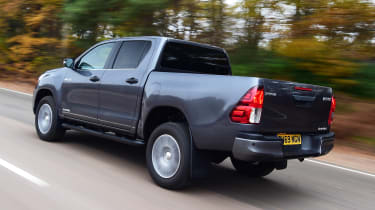 Still, a 0-60mph sprint time of 12.8 seconds is respectable; it was the more sluggish shifting gears, yet a smoother six-speed automatic transmission compared with the L200 meant it gave away a little performance to the Mitsubishi.

But this will make the Toyota a great tow car, while the low-down torque should make pulling heavy trailers and a full load bed relatively easy.

The steering is light and lifeless, but then you don’t buy a pick-up for driving enjoyment, so this trait means that the Toyota feels stable – especially off-road where these vehicles may spend some time. Electronically selectable four-wheel drive with a low-range function comes as standard on both trucks in this test and boosts the appeal of each machine by adding impressive off-road ability to the packages. Whether you’ll be using either of these as a working vehicle or as more of a lifestyle machine, both should cope admirably away from the tarmac – and our tests proved they’ll go as far as you’re likely to be willing to push them. 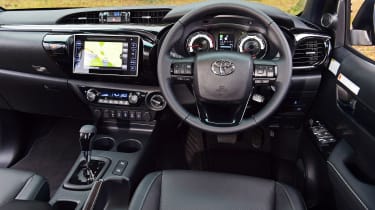 The Hilux in Invincible X trim also gets some new smoked chrome detailing at the front around the grille and headlights, while inside there’s more piano black plastic to give it a more upmarket look. 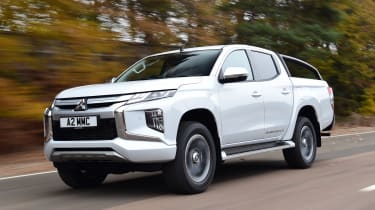 Like the Hilux, a ladder chassis underpins this new L200, and under the bonnet is a revised 2.2-litre four-cylinder turbodiesel engine that produces 148bhp and 400Nm of torque. This is less than its predecessor due to newer, tighter emissions requirements – but the L200 still has the measure of the Hilux for performance.

The body is also new, with a much more angular look and a big, bluff front that means the L200 is as striking as it’s ever been. This is undoubtedly a welcome improvement, but the ride quality isn’t.

On all kinds of roads the L200 judders and shakes over bumps and breaks in the surface. The damping is harsh and you can feel the flex at the points where the body is mounted to the chassis. It means it’s not very calm or comfortable; the L200 feels like it almost never settles down, even when it’s being driven on the motorway.

The latest engine lacks refinement, too, even though it propelled the Mitsubishi from 0-60mph in 11.9 seconds, which was nearly a full second quicker than the Toyota Hilux’s 12.8-second time.

Its quicker six-speed automatic transmission also meant the L200 was sharper accelerating from 30 to 70mph through the gears compared with the Hilux. It took 12.6 seconds against the Toyota’s slightly slower time of 13.4 seconds. 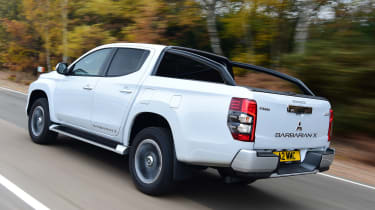 The steering is slow but heavier than the Hilux’s, which means it’s not really any more enjoyable to drive, but this does bring the same benefits when it comes to off-road performance.

For the time spent on the road there’s lots of equipment in Barbarian X trim, even if it is £985 more expensive (including VAT) than the Hilux in Invincible X specification.

Heated leather seats, Mitsubishi’s Safety Pack, a 360-degree camera, heated steering wheel and seats, LED headlights, climate and cruise control and 18-inch alloy wheels all feature. The two trucks’ specs are very similar, so the L200 does look a little pricier, especially given that the material and build quality is on par with the Toyota’s. 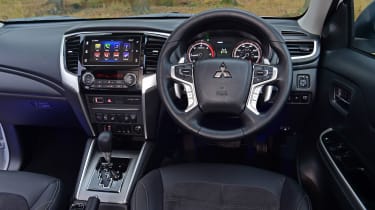 Given the fairly radical redesign outside, it’s also a shame that Mitsubishi didn’t choose to go any further with the update for the L200’s interior. Neither pick-up is a particular star when it comes to cabin design, but view them with an eye on how they’ll respond to working life and you can see why things are as they are.

However, the Toyota has a bit more visual interest; the L200 looks virtually the same as its predecessor inside, and that also means there are some ergonomic problems. 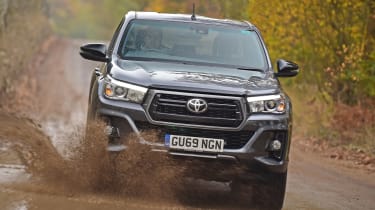 There’s little to split this pair for practicality and workmanlike ability, so the Hilux’s win comes down to it being more comfortable, more spacious inside and better to drive overall. The performance deficit isn’t an issue, because there’s still enough grunt for it to conduct its daily duties easily. 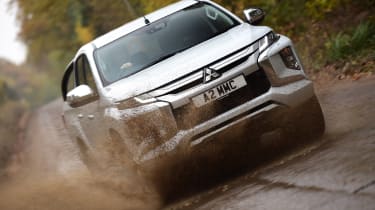 The L200’s ride lets it down. It feels more cramped inside, and while the payload capacity is strong, the bed dimensions are just a bit tighter than the Hilux’s. There’s little to split them for kit, yet the Mitsubishi is significantly pricier, which is why it’s our runner-up. Efficiency is similar to the Hilux.