It's a tough truck, but the Hilux Invincible X adds some upmarket appeal to Toyota's pick-up 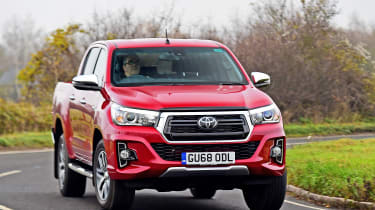 Of all the pick-up trucks for sale in the UK, the Hilux is still the one with the highest profile, even if it's not the last word in refinement in the class. The cabin is spacious with plenty of handy touches, and Invincible X loads up the standard kit to SUV levels. But the rattly diesel and unsettled ride mean it's one of the more utilitarian choices in the sector.

Get the man on the street to name a pick-up truck for sale in the UK, and the Toyota Hilux will be top of the list. Now there's a new Invincible X model at the top of the range that's designed to compete with class leaders such as top-spec versions of the Mitsubishi L200 and Nissan Navara.

The Hilux Invincible X gets a new nose design, with a large gloss black grille framed by chrome trim, which replaces the four-bar design found on the standard Invincible model. The front bumper is also more stylised, with a large lower air intake and different foglight housings on either side and a silver skid plate. A new bumper is added at the back with another skid plate, while silver running boards are added below the doors.

Inside, the dashboard gets piano black trim and some chrome detailing, while the cabin is packed with lots of kit. There are heated front seats, an electrically adjustable driver's seat and Toyota's Touch 2 Go navigation system, which is the same as you get in the Prius or GT86, a rear camera and parking sensors. 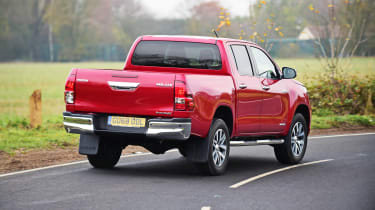 Toyota's Safety Sense system is also included. This comes with a camera mounted ahead of the rear-view mirror that can detect objects in front, as well as reading speed limit signs. Also included is lane assist, which is one of the better systems in the truck market - the Mitsubishi L200 also features it, but in the Toyota if you turn it off, it stays off, rather than returning to on when you drive the truck again.

Under the skin, the Hilux Invincible X retains the same 2.4-litre four-cylinder turbodiesel as the rest of the Hilux range, and comes with a six-speed auto box as standard. It has 148bp and 400Nm of torque from a lowly 1,600rpm, which will be good for towing and means you don't have to over-extend the engine to get going, as it can get pretty harsh beyond around 2,500rpm.

On the road, the Invincible X drives exactly the same as the rest of the Hilux range, which unfortunately means it's not quite as composed as its Mitsubishi and Navara rivals when unladen. The amount of bounce from the rear end is quite pronounced, and only really smooths out at motorway speeds. Carrying a load over 500kg in the bed helps (the Invincible X has a maximum payload of 1,120kg), while the area itself is wide and flat.