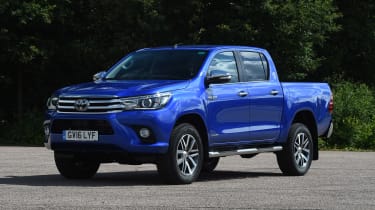 The Hilux is the perfect vehicle for those who need loads of space this winter, because it’s tough and sure-footed in Arctic conditions, while also offering plenty of carrying capacity. It’s ideal for towing as well, and you might have to do just that, because the most practical variant of all, the single-cab, is very hard to find on the used market. Of the 200-plus used Hiluxes we found for sale, only one was a single-cab and there were only three extra-cabs up for grabs. All of the others were double-cabs, which is perfect if you need to bring the family along for the ride.

Think ‘iconic vehicle’, and you probably picture a Mini, a Porsche 911, maybe even a Mazda MX-5. The Toyota Hilux probably doesn’t spring to mind. Yet this pick-up was launched 50 years ago (although it didn’t reach UK showrooms until 1972), and is now in its eighth generation.

The Hilux is the best-selling pick-up across Europe, and nearly 20 million have been built so far. Fitted with four-wheel drive as standard, hugely dependable and usually well equipped, the Toyota deserves the icon tag as much as those higher-profile cars.

For many buyers, an SUV makes more sense than a pick-up. However, if you need a go-anywhere towing vehicle that’ll just keep going this winter no matter what you throw at it, the Hilux could be just the job. 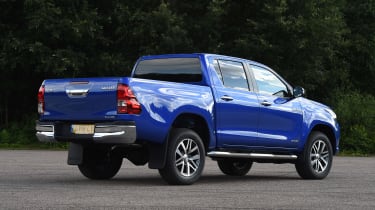 The original Hilux made its debut in 1968. The seventh generation arrived in 2004, with its successor, the current model, reaching showrooms in July 2016. It is offered only with a 2.4-litre diesel, and buyers can choose between Active, Icon, Invincible and Invincible X trims. The last three come with six-speed manual or auto transmissions; entry-level models are manual only.

If you want maximum carrying capacity, you need a single-cab. However, these are rare and come in base trim only; the double-cab is much more family friendly. The manual gearbox is nicer to use than the auto, and it is more economical, too, but the latter offers more relaxed driving and easier off-roading. 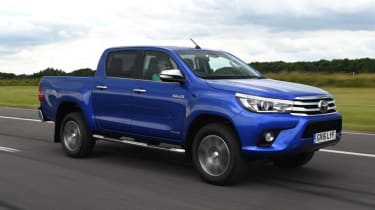 The Hilux Active is relatively spartan, but it does come with electric front windows, electrically adjustable and heated mirrors, a CD/tuner with Bluetooth, and air-con.Icon spec adds a rear camera, DAB radio, side steps, privacy glass, 17-inch alloys and improved cloth trim. The Invincible gets climate control and 18-inch wheels, while the Invincible X also has leather and sat-nav.

Alternatives to the Toyota Hilux

If you’re buying almost new, the Mercedes X-Class is easy to recommend for its refinement, build quality and image; prices start at a considerable £30k, though.

One of the toughest adversaries is the Nissan Navara, which is plentiful, looks smart, is well equipped and refined, but has less impressive performance. Isuzu’s D-Max is outclassed in this company, yet its prices are low and there are plenty to choose from. The Mitsubishi L200 offers stronger competition with its frugal, zesty engine, but the low-rent interior is a disappointment.

Another impressive contender is the Volkswagen Amarok, with its smart cabin, big bed, strong engine and excellent quality. It’s a big vehicle, though, and prices are high.

For added security and usability, a Truckman top is a worthwhile addition. New ones are available to buy for £1,900 or so.

TSS is standard on the Invincible and Invincible X trim levels, but is available only as an extra-cost option on the Active and Icon specs.

All Hiluxes are fitted with four-wheel drive as standard, with a locking rear differential to aid off-roading capabilities. 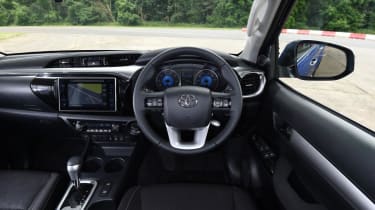 When you consider that the Hilux is a commercial vehicle, its cabin is surprisingly impressive, with its modern features and creature comforts making it more car-like than you’d expect. The infotainment system (which is not fitted to the Active trim level) works well, but parking sensors are standard only on the range-topping Invincible X and no Hilux gets an alarm as standard.

All Mk8 Hiluxes are still under guarantee, because they come with a five-year, 100,000-mile warranty. The service intervals are Intermediate, Full and Full+, which are priced at £250, £395 and £500 respectively.

These run in sequence, with Intermediate in effect an oil change and vehicle check. Once a Hilux reaches its fifth birthday, it’s eligible for cut-price maintenance under Toyota’s Essential Care programme; services alternate between Silver and Gold, at £150 and £270. There’s no cambelt to replace, and Light Commercial Vehicle (LCV) tax means a fixed VED rate of £250 per year. 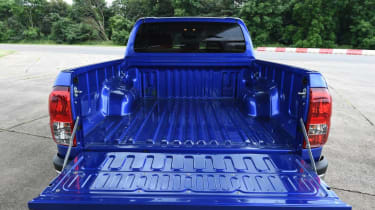 The latest Hilux is evidence of Toyota’s good record of not issuing many recalls; so far, the truck has yet to be the subject of any campaigns. There have only ever been seven Hilux recalls, mainly focused on the seventh-generation model. One action that was launched in 2015 also captured some sixth-generation vehicles, because they could suffer from airbag problems.

The Hilux is a bit too niche to appear in our Driver Power satisfaction surveys but, as a manufacturer, Toyota has a habit of doing very well with its newer models, before they fade as they get older. For example, the C-HR and Prius Mk4 came 14th and fourth respectively in this year’s new car survey, while the RAV4 and Prius Mk3 achieved fifth and 11th places in the used car poll.