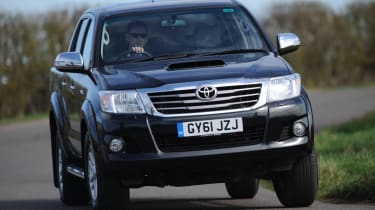 The Toyota Hilux has been around for a while, with the first version launching back in 1968, but now into its seventh generation, Toyota’s pick-up offers an extra dose of style and comfort compared to more traditional commercial vehicles.

It’s renowned for its dependability and near unbreakable durability, and Toyota offers three different models depending on what you need: there’s a two-seat Single Cab Hilux, a four-seat Extra Cab version (the back seats are only really for short journeys), and a four-door, five-seater Double Cab, with the latter model eating into load space marginally to give more room inside the cabin.

As with any pick-up featuring an open load bay, security isn’t great, so many owners tend to fit a solid load cover for added peace of mind – especially if you’re storing expensive tools or equipment in the back. Thankfully, Toyota’s dealers offer a huge array of options to further customise your Hilux.

There are only two different engines to choose from. Both are four-cylinder D-4D turbodiesel units – the first a 2.5-litre engine producing 142bhp, the second a larger 3.0-litre power unit kicking out 169bhp.

The 3.0-litre is only available as a Double Cab in top-spec Invincible trim, while the smaller, less powerful diesel can be had in entry-level Active spec (as a Single or Double Cab), or in the mid-grade Icon model.

Starting at £21,255, Active versions don’t get much equipment as standard, with manual air conditioning, electric windows and a rear-differential lock for extra grip off-road.

Upgrade to the £25,205 Icon model and you get 17-inch alloy wheels (steel wheels are standard on the Hilux Active), a chrome grille, heated electric door mirrors, a rear-view camera, a leather steering wheel and gear knob, and Toyota’s Touch 2 multimedia system.

Sitting at the top of the Hilux tree is the Invincible trim – it’s our choice and features automatic air conditioning, cruise control and an upgraded audio system to make the Hilux that little bit more liveable.

Drivers of the Hilux shouldn’t expect its road manners to be comparable with a regular SUV, and it falls some way behind more car-like rivals such as the Hyundai Santa Fe or Kia Sorento.

The more heavy engineering underpinnings are designed above all to be tough, durable and unbreakable. A four-wheel-drive system is fitted as standard, which means it's accomplished off-road, too, but it’s nowhere near as comfortable as rivals like the Ford Ranger and VW Amarok.

The 2.5-litre engine is durable, but we prefer the beefier 3.0-litre unit inherited from the Land Cruiser. Acceleration is fair for such a large machine, sprinting from 0-62mph in 12.1 seconds for the manual and 12.0 for the five-speed auto, and it’s nicely refined at a cruise, too. However, the lack of weight over the back wheels means that the rear can break free under cornering.

The best engine for lower running costs is the 2.5-litre diesel, which boasts average fuel consumption of 38.7mpg and CO2 emissions of 194g/km, meaning still hefty costs for yearly road tax at £265.

But the 3.0-litre diesel offers better performance and isn't far behind in terms of economy, with a figure of 36.7mpg and only slightly worse CO2 emissions at 203g/km – although this takes the Hilux up a tax band to £290 for 12 months Vehicle Excise Duty.

Add the automatic transmission and this drops further to 32.8mpg, while CO2 increases to 227g/km. Insurance costs should be reasonable, though, as the Double Cab model with the 2.5-litre engine falls into group 9A, while the 3.0-litre version falls intro group 10A.

In terms of list price, the Hilux is cheaper than all of its rivals bar the Mitsubishi L200, which starts at £19,014. Service intervals are frequent at 10,000 miles, but as the Hilux is classed as a commercial vehicle, those entitled to claim back VAT can do so. This means that you can buy the range-topping Invincible model for less than £20,000.

The latest Hilux has a hint of Toyota Land Cruiser about its nose, with a large chrome grille and big headlights. Beyond that, however, the Hilux is all about function, with a standard two- or four-door body and a large pick-up bed behind it dominating the proportions and design. It’s more stylish than a van, but it’s not exactly striking next to more appealing-looking pick-ups like the Volkswagen Amarok with its chunky design.

On the inside, the same is true. The dash is constructed from hard, durable plastics, but quality and assembly are first-class. It feels much less utilitarian than you’d expect.

The latest Hilux was described by Toyota as being “one step up” from the old model, and a much roomier cabin reflects this. Of the three models offered, the four-door, five-seater Double Cab is the most suitable for use as a passenger vehicle – the Extra Cab’s rear seats are only really for occasional use, as it’s cramped in the back.

Although the Double Cab sacrifices some of its load space for its roomier back seats, the rear bench flips up to reveal some useful cubby holes. However, the centre passenger only gets a lap-belt rather than a full three-point seatbelt.

The Double Cab model’s load deck is 1,520mm long and 1,515mm wide, while the Single Cab version has a huge 2,315mm by 1,520mm deck. The Hilux offers a driving position that’s almost comparable with an SUV, while light controls and good forward visibility help in town.

One of the biggest problems you’ll face day-to-day, though, will be the vast dimensions that mean the Hilux incredibly tricky to reverse without parking sensors. That said, a rear-view camera is standard on Icon and Invincible models, while front and rear sensors are available as an option. They really should be standard on a car like this, as the rear deck is long and almost impossible to see from the driver’s seat.

The Hilux has workmanlike roots, but standard safety kit is as good as a regular SUV. Electronic stability control, traction control, ABS with brake force distribution and two airbags are all fitted a standard – although Invincible variants get improved safety with six airbags.

And you can rest easy knowing that if anything goes wrong – which is highly unlikely, considering the Hilux's virtually indestructible nature – Toyota dealers are among the best in the country for customer service. And owners clearly agree, as they voted Toyota a very impressive 3rd for reliability in our Driver Power satisfaction survey.