Seven-seat Mitsubishi Shogun Sport returns to the UK, but can’t match rivals for comfort or economy 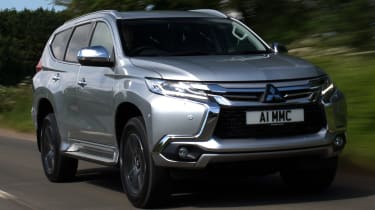 It's hard to recommend the new Mitsubishi Shogun Sport as a seven-seat SUV. Rivals are more comfortable, more economical and better to drive, and it looks expensive alongside cars like the accomplished Kia Sorento. The third row offers a decent amount of space, however, and it’s adept off-road – but this is a rural workhorse rather than true family SUV.

The Mitsubishi Shogun Sport is back in Britain, and while the Japanese firm’s focus will remain on its smaller crossover offerings, the seven-seat SUV occupies important territory for the brand. It’s a rival for cars like the Kia Sorento and Land Rover Discovery Sport, spun off the same platform as the popular L200 pick-up truck.

Style-wise, however, the Shogun Sport distances itself from its commercial cousin. It uses design cues from the Eclipse Cross, and a boasts a subtly restyled cabin. The unrefined 2.4-litre four-cylinder diesel engine remains, developing 179bhp and 430Nm of torque.

Thankfully, the Shogun Sport ditches the pick-up’s leaf spring rear suspension setup in favour of a more complex multi-link arrangement. Yet that doesn’t mean that the Shogun rides particularly well. There’s more than a whiff of pick-up truck choppiness, and it struggles to settle unless the road is completely smooth. On country lanes the car reveals its agricultural origins, picking out lumps and bumps all too often. It’s more composed at motorway speeds, but wind noise is an issue. 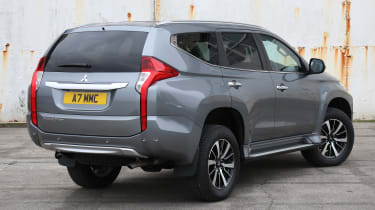 The steering can’t quite lift the Shogun Sport’s dynamic appeal, either. There’s little feel through the wheel, and even slow corners leave you guessing as to how much lock to apply.

Off-road this is a capable car, though. Equipped with Mitsubishi’s Super Select II all-wheel-drive system, low-range gearbox and locking differentials, the Shogun Sport can tackle just about anything you throw at it. A terrain selector system is standard, too, with different modes for gravel, snow and mud, sand and rocky surfaces. Wading depth comes in at an impressive 700mm, and it’ll tow a 3.5-tonne braked trailer.

The new eight-speed automatic transmission sends power to the rear wheels in its default 2H mode, however. Bosses suggest this should save fuel, though the quoted 32.8mpg official fuel economy is still pretty poor – lagging behind the latest SsangYong Rexton.

Inside, the Shogun Sport’s cabin is robust rather than luxurious, and even though the seven-inch infotainment display boasts smartphone link apps as standard, it is far from cutting edge. The display is blurry, and the old-school menu layout gives it a dated appearance.

There’s more than enough room for a couple of children to be comfortable in the third row, mind, and even smaller adults won’t feel too claustrophobic. Assembling and accessing that row is fairly straightforward, but it’s quite a step up to get up and into the very back of the car. There’s a 503-litre boot with five seats in place, expanding to 1,488 litres with the second row folded. Rivals are bigger, however. 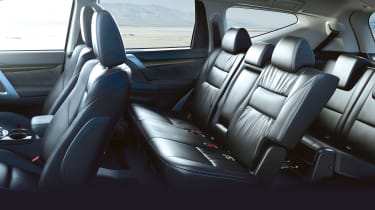 Two high-specification trims are offered in Britain, with all models boasting a decent equipment list with leather seats as standard. The range topping Shogun Sport 4 gets adaptive cruise control, a host of driver assists and safety features, plus electrically-operated and heated front seats.

There’s no denying it’s expensive, though; at £39,775, this is well-specced Discovery Sport money. It could fare better on a monthly PCP deal though thanks to a £1,000 dealer deposit contribution.