Ducati’s mid-sized Monster has all the style and character of the original V-twin, plus thrilling performance and a competitive price 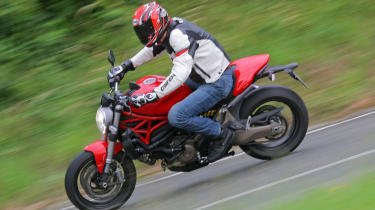 The Monster 821 has similar capacity to the M900 Monster that began Ducati’s famous family of naked V-twins back in 1993, and it shares some of the old model’s raw character, as well as its look. However, the 821cc V-twin is very much a modern Monster: liquid-cooled, much more powerful than its air-cooled ancestor, and far more sophisticated, incorporating ride-by-wire throttle (with no mechanical link between the throttle and accelerator), multiple riding modes, traction control and ABS brakes. It still has a few slightly rough edges, but overall it’s a very refined bike that offers plenty of Ducati technology and performance at a reasonably accessible price.

This is the mid-ranking Monster, sitting between the 1200 models and the recently released Monster 797 in Ducati’s naked sports bike family. With a power output of over 100bhp and a base price of close to £10,000, it’s not really an entry-level model – that job is left to the air-cooled 797 and the ever-growing family of Scrambler V-twins – but it’s far more accessible than the Monster 1200, whose price starts at £11,495.

The least expensive member of the original Monster 821 family, the black-finished Dark, has been dropped since its launch in late 2014, leaving the remaining base model, which costs £9595 in red or an extra £200 in grey. There’s also a Monster 821 Stripe, in red paint with a white stripe on its tank, which sells for £10,095.

That’s not cheap for a naked middleweight. However, although some rivals, including Yamaha’s MT-09 triple and Triumph’s base-model Street Triple S, are a couple of thousand pounds less expensive, Triumph’s flagship Street Triple model, the RS, costs more than the standard 821, and MV Agusta’s Brutale 800 is considerably pricier still. 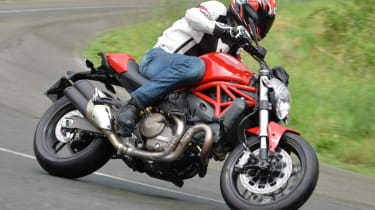 Power comes from an 821cc DOHC, eight-valve V-twin engine, which incorporates Ducati’s desmodromic valve operation and a slipper clutch. The relatively long-stroke powerplant was first seen in the Hypermotard, before being modified for use in the Monster, with a larger airbox and new exhaust system, which helped increase output slightly to a maximum of 109bhp at 9,250rpm. There are three riding modes, selectable by pressing the indicator button. Sport and Touring deliver the full output, the latter with softer response; Urban is softer again, with the maximum output reduced to 75bhp.

The chassis layout is based on that of the Monster 1200. There are no changes to the tubular steel frame, whose front and rear sections are bolted directly to the engine, as on Ducati’s Panigale sports bikes. Among the differences are the 821’s aluminium swing-arm, which is twin-, instead of single-, sided. Braking follows the standard Monster 1200’s format, with 320mm front discs and Brembo radial Monobloc calipers, although the 821 doesn’t share the larger-engined model’s radial master cylinder. Ducati’s ‘Safety Pack’ of ABS brakes and eight-level traction control comes as standard.

Straight-line performance is impressively flexible. The Monster is docile and smooth, even when revved towards the 11,000rpm limit through the gears, but there’s enough top-end power for plenty of excitement. On open roads, the Ducati sits smoothly at 80mph and accelerates strongly, heading for a top speed of about 140mph, while its rider holds tight to the raised handlebar, the sense of speed enhanced by the lack of wind protection. 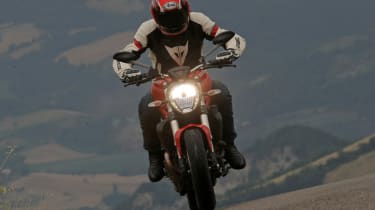 Ride quality is pretty good, and the suspension gives a taut, reasonably firm feel, while soaking up bumps far more effectively than Monsters of a few years ago. Hard riding occasionally triggers twitching in bumpier bends, but the Ducati gives plenty of feedback and steers very precisely, its agility helped by a narrower rear tyre than that of the 1200. The Brembo front brake is superbly powerful; and, although the rear disc is typically lacking in feel, the efficient ABS system means there’s no worry about locking it up.

For what is a pretty quick bike, the Monster is respectably fuel-efficient. Many owners average over 50mpg, and even hard use rarely drags consumption below 45mpg. For a naked bike, the Ducati strikes an appealing balance: exhilarating performance, but without the high cost of fuel and tyre-wear associated with a bigger and even more powerful bike. Servicing costs should generally be reasonable, too. Ducati asks for an oil change every 9000 miles or annually, and twice that distance before checking the desmo valve adjustment, meaning that a typical owner will never need to get that job done. 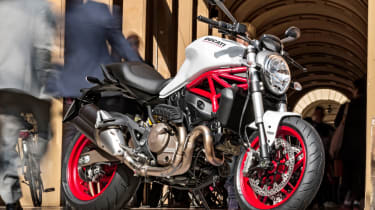 Ducatis aren’t flawless, but reliability is also generally good: the Italian company shed its reputation for mechanical problems and dodgy electrics some years ago, and the desmo V-twin was proven in the Hypermotard before being adapted for use in the Monster. All the firm’s bikes come with a two-year, unlimited mileage warranty.

Visually, the Monster 821 is almost identical to the 1200, and Ducati engineers have got the Monster’s basics pretty well sorted. Its riding position is roomy and the controls work smoothly, although some riders complain about a lack of room around the footrests. The 17.5-litre tank is good for over 150 miles and the seat is respectably comfortable. Removing its colour-matched pillion seat cover, which comes as standard, reveals reasonably, if not generously, sized passenger accommodation, with grab-handles alongside. 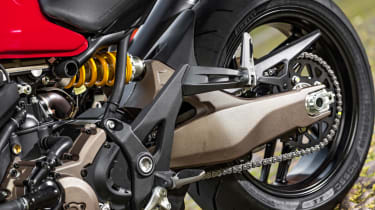 By middleweight standards, the Monster 821’s electronic features are impressive. The traction control system is slightly awkward to turn off, if you want to pull a wheelie, but like the ABS, it is especially welcome in the wet. The instrument panel is less colourful and attractive than the 1200’s, but it still shows fuel consumption and the range to empty, as well as incorporating a lap timer and shift light, and being adjustable for brightness. Paintwork is thickly applied and the Monster generally has the neat detailing of a high-quality product.