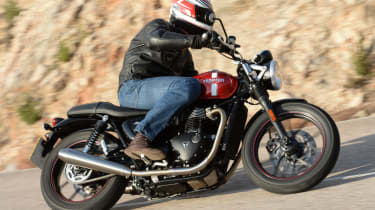 The Street Twin was created as the entry-level model in Triumph’s new-generation Bonneville family of liquid-cooled parallel twins – and it does that job very well. The softly-tuned, 900cc Twin is not particularly fast or exciting, but it’s very torquey, agile and easy to ride. Add to those attributes its neat, retro styling, reasonable practicality and solid build quality, and the result is a very capable roadster that has deservedly become one of Triumph’s most popular models.

The Street Twin owes its name to Triumph’s legendary Speed Twin, the hugely successful 500cc model that established the parallel-twin engine format as the British-led motorcycle industry’s dominant force in the years after World War II. This modern 900cc twin could never match that impact, but as the entry-level model of Triumph’s updated, liquid-cooled Bonneville family, it is an important model for the Hinckley firm.

With its Eighties style and twin rear shocks, the Street Twin is intended to look simple – to ride the joint waves of classic looks and easy customisation. But, beneath all that, it’s a modern, well-engineered motorbike. At £7,750 in basic black, or £7875 in six alternative colour schemes, it’s a stylish and capable competitor for rival European and American entry-level models, including Ducati’s Scrambler family, Harley-Davidson’s 883 Iron and Moto Guzzi’s V7 II Stone and Classic. There’s also a 47bhp, A2-legal version, available in red or matt black, at the same £7,875 price. 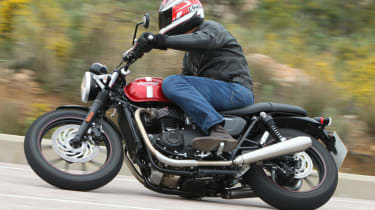 The 900cc engine resembles the original, pushrod-operated unit of the original Speed Twin and 650cc Bonneville, but is more different from even the previous, 865cc air-cooled Bonneville unit than its appearance suggests. Not only is the eight-valve powerplant cooled by water as well as air – with the help of a slim radiator between the downtubes of the traditional tubular steel frame – it also uses a single, instead of twin, overhead camshaft, and has longer-stroke dimensions. Maximum power is a modest 54bhp, but torque output at low and medium revs is comparatively strong. The transmission combines a five-speed gearbox with chain final drive.

Modern features include ride-by-wire throttle (with no mechanical link between it and the accelerator) and traction control, but much of the Triumph engineers’ efforts went into fashioning the powertrain’s retro look. Neat features include traditionally shaped engine covers and finned exhaust clamps, while ugly modern essentials, such as the exhaust catalyser, are carefully concealed.

The chassis is similarly traditional, comprising a tubular steel frame with gaitered, non-adjustable Kayaba forks, and the same firm’s preload-adjustable twin shocks. Braking is by a single disc at each end, the 310mm front rotor gripped by a twin-piston calliper from Nissin, another Japanese specialist.

Triumph makes no apology for the fact that the Street Twin is designed to provide gentle, user-friendly performance and all-round ability. Its flexible power delivery certainly makes the bike easy to ride. There’s no rev-counter, but that doesn’t matter, because the Twin is happy to rumble forward from very low revs, its silencers making enough twin-cylinder noise to add to the occasion. The Triumph cruises with a pleasantly smooth feel and responds crisply to a twist of the throttle, rarely requiring a downchange through the sweet-shifting five-speed box. 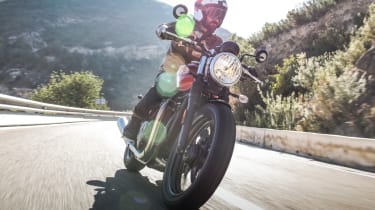 However, it doesn’t deliver much speed or excitement. Acceleration tails off above about 70mph, and is almost finished by 90mph, as the Twin approaches its maximum speed of just over 100mph. On a more positive note, the chassis works well enough to make twisty roads fun, combining stability with outstanding agility. The fairly wide handlebar allows quick, effortless changes of direction, and the gaitered forks and dual-rate shocks maintain control without compromising ride quality. Pirelli’s modern Phantom tyres supply more grip than their traditional tread pattern suggests, and braking power is very adequate, given the Twin’s performance and weight.

Triumph’s softly-tuned 900cc parallel-twin engine is impressively economical. Flicking through the Street Twin instrument panel’s information, which can be toggled from the left handlebar, reveals the bike to be returning well over 60mpg at steady motorway speeds, and averaging over 50mpg, even with enthusiastic use of the throttle. Triumph quotes 75mpg, and claims the Street Twin’s liquid-cooled engine is 36 per cent more economical than the previous Bonneville unit. 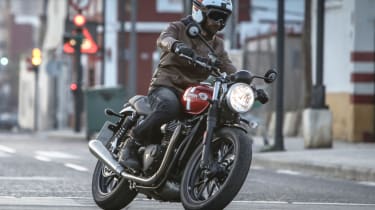 The Street Twin should also match or exceed the reliability of the outgoing air-cooled Bonneville, which earned a good reputation in contrast to that of the old, Meriden-built twins. Service intervals are usefully increased from the previous engine: up from 6,000 to 10,000 miles. The bike’s relatively gentle character also helps to get a longer life from consumables like the tyres and brake pads, in turn helping to make the Street Twin respectably inexpensive to run. Like all Triumphs, it comes with a two-year, unlimited-mileage warranty.

Several factors contribute to the Street Twin’s rider-friendly feel, including its sub-200kg dry weight. The seat is low, at 750mm, and cut slim at its front to help shorter riders get both feet down. The riding position is very natural and respectably roomy for what is a fairly small bike. That’s thanks to a one-piece handlebar that is set quite low and well forward, and footrests that are sufficiently rear-set to give quite generous legroom. The round instrument panel is attractive and informative, complementing its analogue speedo with a digital display, whose information includes a fuel gauge and consumption readings, plus remaining range and a gear-position indicator. 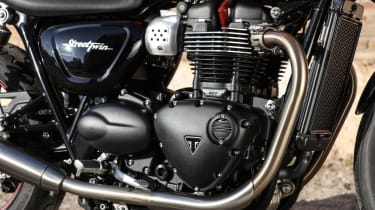 The fuel tank holds a less-than-generous 12 litres, but even so is good for a range of 130 miles – or more at a relaxed pace. The dual-seat is just about sufficiently comfortable for that range and has room for a pillion, but no grab-rail. Unlocking the seat reveals a USB socket, which can be connected to an optional handlebar-mounted socket to power a sat-nav. Heated grips and a tyre pressure monitor are also among the list of more than 150 accessories. Triumph has grouped some of the extras into three themed “inspiration kits”, named Urban, Brat Tracker and Scrambler, each collecting together a handful of parts.