Now with fuel injection and combined braking, the popular Lexmoto Adrenaline offers Euro 4 fun, albeit at a slightly higher price 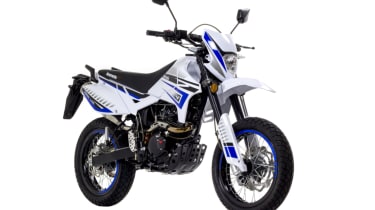 For £1999, you’re getting quite a decent off-road-style bike with the Lexmoto Adrenaline. The latest version is fuel-injected and comes as Euro 4 spec, but it costs £200 more than the old version. If you’re looking for a serious off-roader, then you’re barking up the wrong tree. But if you want something for occasional fun and that makes a useful 125 for ‘normal’ riding, it’s worth a try.

Even if you’re not overly familiar with Lexmoto, you’ll no doubt have heard of the Pulse Adrenaline. That Chinese machine is basically the same bike as this one, but Lexmoto took over the Adrenaline name and brought it up to the latest spec for 2017. As well as fuel injection replacing the old carburettor and a new combined braking system (CBS), the latest model also has better bash-resistant plastics, improved fasteners, LED indicators and a lithium battery.

The engine is, as you’d expect, a generic Chinese motor based loosely on a 9.7bhp air-cooled Suzuki unit. It’s not overly powerful, but it makes good use of its five-speed manual gearbox. The combined braking system works well enough: the rear pedal operates both front and rear discs simultaneously to stop the bike under control, but the front lever can also be used on its own.

If you’re short, the Adrenaline probably isn’t for you: its seat height of 870mm means you’ll struggle to touch the floor. It does ride fairly well, though, as Lexmoto has tweaked the suspension for 2017 and it’s adjustable front and rear, with plenty of travel. The latest bike has better tyres for year-round use as well. Performance isn’t really earth-shattering, and there are quicker 125s out there, but this is still a bike that you can have a bit of fun on. 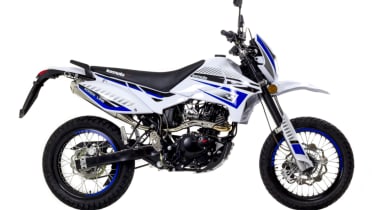 Cheap is generally the name of the game when you’re buying Chinese motorcycles. They’re not overly expensive to buy or run: you can expect to get around 100mpg out of this bike, and parts are very cheap in comparison to a European or Japanese bike.

With a Lexmoto, you’re buying a bike from a well-known brand with good spares back up – the company runs the Chinese Motorcycle Parts Online business as well – although the Lexmoto warranty is labour-only, so bear that in mind.

The Adrenaline looks great for the price: most 17 year-olds would be happy to be seen on one and there are graphics kits and accessories to help you personalise your bike. It comes with digital clocks, wavy brake discs and modern styling, and build quality is getting better all the time with Chinese companies as well. 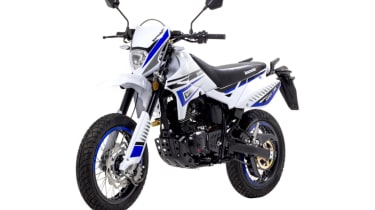 If you’re looking for a practical machine, you’ll be better off with a scooter, rather than an off-road-style machine; there’s no storage on a bike like this, it’s high, not very comfortable and has minimal weather protection. However, it is great fun and looks cool.