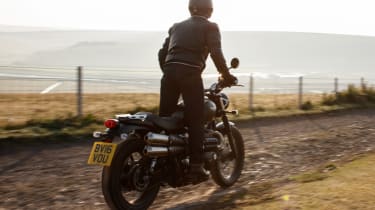 The stylish, capable and user-friendly Street Scrambler echoes the look and layout of some of the old Triumph firm’s best-loved bikes of the Sixties: lean, handsome Bonneville-based parallel twins built for off-road competition, mostly in the US. This modern Street Scrambler’s 900cc engine produces a modest 54bhp, making it a bike designed for rider-friendly fun, rather than speed. It’s no bike for off-road riding, let alone racing, but it is a gentle, good-looking roadster with plenty of relaxed parallel-twin charm.

That first model initially made little impact, despite its stylish looks and resemblance to legendary Triumph ‘desert sleds’ – racy, stripped-down 650cc twins that were among the fastest and coolest bikes on America’s West Coast in the Fifties and Sixties.

Despite barely being tweaked, apart from the adoption of fuel-injection, the Scrambler gradually gained in popularity until it had become a cult classic. Over the years, its image has been enhanced by association with stars including Steve McQueen and David Beckham, it has starred in numerous movies and the TV series Doctor Who, and inspired countless shed-built specials. 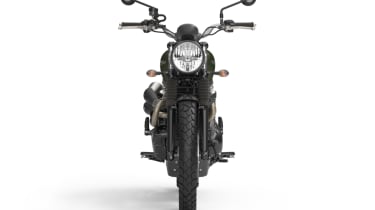 Its liquid-cooled successor, the Street Scrambler was introduced in 2017 and is a much more refined machine, albeit with a higher price of £8900. Its similar look disguises the fact that it is a completely new bike, sharing its softly tuned, 900cc parallel-twin engine with the entry-level Street Twin roadster and Street Cup café racer.

There are more similarities with the Street Twin than the two 900cc bikes’ different looks might suggest. The SOHC, eight-valve engine and five-speed gearbox are identical, and the Scrambler’s only powertrain change is a new high-level exhaust system, with a fuel-injection tweak to suit. There’s no change to the ‘high-torque’ engine’s peak output, although the generous 80Nm is produced earlier, at just 2,850rpm. By coincidence, the Street Scrambler’s maximum power output of 54bhp is identical to that of Triumph’s previous, 865cc air-cooled Scrambler, though delivered 1,100rpm earlier, at 5,900rpm. 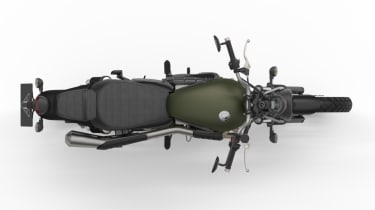 The Street Scrambler also uses essentially the same tubular steel frame as the Street Twin roadster, but its chassis is modified by the adoption of a wire-spoked front wheel that is 19, instead of 18, inches in diameter, and by longer Kayaba suspension at both ends. The gaitered, non-adjustable forks and preload-adjustable rear shocks echo the Street Twin’s units by having 120mm of travel, typical of a roadster not a dual-purpose bike, but the steering geometry is slightly more relaxed. Braking is by a single, 310mm front disc and twin-piston Nissin calliper, plus a smaller rear disc.

Fuelling is crisp, the five-speed box changes sweetly, and the Street Scrambler pulls so effortlessly from low revs that its lack of a rev-counter isn’t a problem. Straight-line performance is enjoyable, if not particularly exciting, but the Triumph remains stable on straights and through sweeping curves. It cruises smoothly at an indicated 80mph, too, and has acceleration in hand all the way to a top speed of just over 100mph. The engine’s broad spread of torque also means the bike is happy in town, where it feels pleasantly relaxed and controllable. 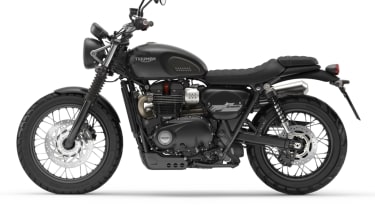 Its chassis is an important contributor to that, the long (but relatively short-travel) suspension helping to ensure that the Street Scrambler feels more like a typical roadster than an adventure bike. Its big front wheel means that quick direction changes require a firmer-than-normal press on the wide handlebar, but the Triumph can be hustled through roundabouts or cranked into hairpins with confidence that it will remain stable. Its Metzeler Tourance tyres supply plenty of grip, despite being fairly slim, and there’s sufficient ground clearance and braking power to make twisty roads fun.

Triumph’s liquid-cooled, 900cc parallel-twin engine is impressively economical, allowing most riders to get 60mpg or better, if not the 74mpg that the company claims. That allows a respectable range of about 150 miles, despite the fairly small, 12-litre tank. The digital panel can display information ranging from consumption and remaining range to engine speed, viewable by toggling the “i” button on the left handlebar. 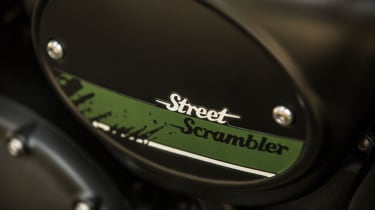 By 900cc standards, the Street Scrambler should also be inexpensive to run in other respects. Service intervals are a fairly generous 10,000 miles; and, the engine’s gentle power delivery should mean the tyres give good mileage. The previous Scrambler had a solid reputation for reliability, and there’s no reason to think that its more refined, liquid-cooled successor should be any different.

As with the other members of the Bonneville family, the Scrambler’s liquid-cooled status is accompanied by a much higher level of detailing and finish than on its air-cooled predecessor, as well as a fairly basic traction-control system. The engine unit is compact and cleanly styled, and the high-level exhaust incorporates efficient heat-shielding. Neat details include serrated ‘bear-trap’ footrests, aluminium headlamp brackets, foil tank graphics, rubber knee-pads and removable pillion footrests. 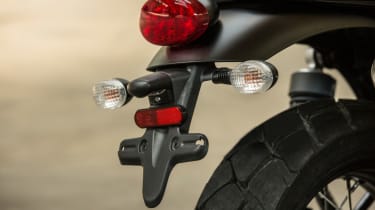 The paintwork comes in basic black, matt green or red-and-silver, the latter two costing an extra £125 and £300, respectively, over the base model’s £8900. The seat has an Alcantara-style finish, and its pillion pad unclips, to be replaced by a luggage rack that is included in the price: useful when you’re not carrying a passenger.

Despite the Scrambler’s long-limbed look, its slim seat is a fairly low 792mm in height, which helps to make the bike manageable, despite it weighing 15kg more than the Street Twin. To broaden the bike’s appeal and add a personal touch, there are more than 150 accessories, ranging from heated grips and a bench dual-seat to engine bars, headlamp grille, centre-stand and a Vance & Hines silencer.