Riding shotgun with an Isle of Man TT sidecar legend 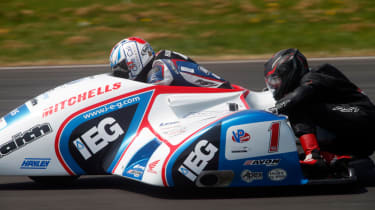 Tom Birchall has one of the toughest jobs in motorsport. That’s because he helps his brother, Ben, steer a sidecar through the 37-mile Isle of Man TT course at record pace, leaning out of it around corners and reaching speeds of more than 150mph with nothing but millimetres separating them and the tarmac whizzing underneath.

The Birchall brothers are six-time winners of the Isle of Man TT and current lap-record holders in the sidecar class. They are also the 2009 and 2017 FIM Sidecar World Champions, so not many people on the planet can match their speed on three wheels.

With the TT now fully under way, the brothers are hoping to seal another win on Friday 8 June. But Auto Express met up with them a few weeks ago at the Castle Combe race track in Chippenham, Wilts, as they conducted some final tests with Avon Tyres.

Sidecar racing is unlike any other form of motorsport. The Birchalls’ custom-built bike is powered by a 600cc four-cylinder Honda engine that’s been fully tuned to around 142bhp. It runs a MoTec ignition system capable of adjusting the fuel and air mixture to balance out elevation changes.

The brake calipers are similar to what’s found in a race car, while the bespoke tyres, produced by Avon, are flat-shaped instead of the usual oval design. The British-built Maxton suspension runs with just 35mm of travel for optimal stability, and the whole racer sits at less than 100mm from the ground.

Pilot Ben steers the front tyre and controls the throttle and brakes, while passenger Tom helps to guide the car around the corners by moving his body around the ‘chair’ – a flat floor – and over the bike. No safety belts or harnesses are involved, either. 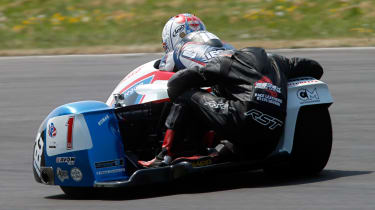 For both brothers, the desire to hit the track started from a very young age. “I was desperate to go racing early on,” explains Ben. “We were at the Isle of Man TT back in 1989, and I came out to the sidecar paddock and asked if I could clean one of the bikes. It started from there.”

By 1998 he had entered his first race as a passenger at Mallory Park in Leicestershire, and by 2003 had an offer to race as a Grand Prix passenger at the World Championships. But the aspiration to be a pilot was even greater, so Ben decided to remortgage the house and, with the help of his boss at the time, managed to secure enough funds to purchase a sidecar racer himself.

Tom, who is 10 years younger than Ben, grew up watching his sibling race. “You want to do what your big brother does, and by the time I was old enough to put on a pair of leathers I put my name down for the seat,” he says. By 2008 they had won their first race and the next year they were FIM Sidecar World Champions. That’s also the year they entered the TT. 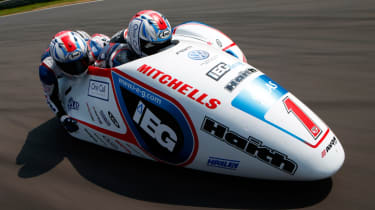 The Isle of Man TT is very different to short-circuit racing. The course stretches 37 miles over public roads. Manhole covers, potholes and road markings cover the tarmac, while kerbs, stone walls, trees and buildings are only feet away from the racers, who regularly reach average speeds in excess of 100mph.

But the TT is a time-trial, not a race, which means the competitors are going up against the clock. To memorise the 37-mile circuit takes around three years for solo motorcyclists. For sidecars it’s an even more intricate process, as both rider and passenger have to learn the track differently. They must also trust that each one has done their homework.

“Because we’re so low down, you can’t see many of the details the solo racers use for markers,” says Ben. “And a lot of the sections the solos can take straight, we cannot [and have to steer through] as we’re much wider. You just pick out the stuff that matters to you.”

Tom has a tougher time picking out markers. “As a passenger, a lot of time I don’t see the course,” he explains. “So I learn to feel the different bumps and sections, or I look at Ben’s left foot, which controls the brakes, to know he’s about to brake.” 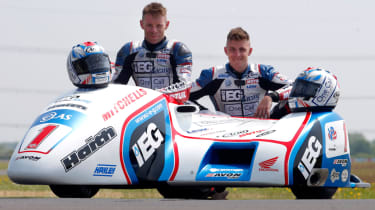 Absolute trust between the pair is key. The rider has to know the passenger will guide the racer around the corners, while the passenger trusts the rider to hit his brake and corner points accurately. “For at least two weeks after the TT, I’ll wake up at night thinking I’m still going around,” says Ben. “To do well at those speeds, you have to completely consume yourself.”

But the brothers have clearly perfected the routine because they are the current lap-record holders with an average speed of 117.119mph. With a top speed of around 150mph, Ben runs roughly 60 per cent of the track with the throttle wide open. He adds: “There are corners we take flat in top gear where superbikes go down two gears; it’s just because we’re able to carry that much more speed through them.”

To find out what he means, Auto Express got the chance to ride on Tom’s seat as a passenger for four laps of Castle Combe. He gives us a few tips before we head out. “Just try to relax,” he says. “Hold on too tight and you’ll cramp your hands, so relax and enjoy it.” 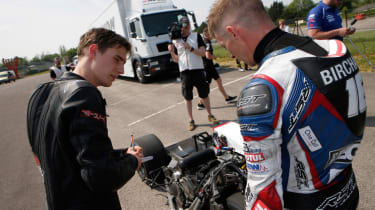 Easier said than done. The carbon-fibre plate floor creaks as we climb in, and the engine fires up and sets into a snarly tempo. Our left hand holds a small railing in front while our right reaches across the body and grabs a hole in the right side. The radiator for the bike sites right in front of us, blowing hot air our way.

The first lap is a warm-up and Ben turns to make sure we’re okay. He then picks up the pace. On right-hand corners we stand and lean across the bike, trying to help Ben steer, tucking ourselves back into position on exiting the corner. The acceleration is violent as Ben snaps through the quickshifter. The braking – all three brakes are simultaneously controlled by a lever with his left foot – is even more impressive as the bike slows down with rapid pace ahead of the chicanes, pushing us against the front section. 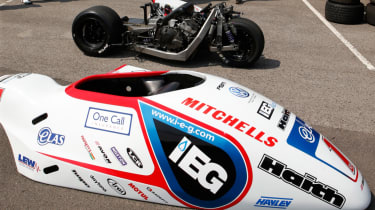 But most memorable is the way the bike corners. Turn 1 is taken flat out at 130mph and we feel the G-forces go through our body – knowing you’re millimetres from the ground with nothing but your hands acting as your safety harnesses only adds to the fear. The sensation of speed, acceleration and grip is heightened by the bumps and twists – all felt through the stiff set-up. By lap four, we’re suffering cramp in our right arm and, luckily, Ben calls it a day.

We ask how hard he was pushing it. “Around 30 to 40 per cent in the corners,” he replies. How racers do three laps of the 37-mile circuit is very hard to comprehend. There’s nothing quite like sidecar racing, and nothing quite like the TT.

Enjoyed this motorsport feature? Then why not take a read of our World Rallycross feature where we took a Ford Fiesta RX2 around Silverstone.