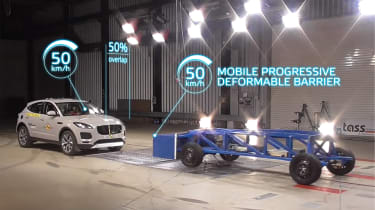 The Euro NCAP crash-test programme is to undergo its biggest shake-up in a decade, with tough new assessments introduced that will penalise bigger cars if they are judged likely to damage smaller cars disproportionately.

The changes have come about because of concerns that SUVs and larger, heavier cars cause small cars and their occupants to “fare less well” in real-world collisions.

To address this, a new, deformable barrier will be used in tests, with measurements from it determining how much “intrusion” cars would make into each other during collisions. The barrier will move at 50km/h (31mph) instead of being static, in order to better reflect real-world collisions.

Matthew Avery, director of research at Thatcham Research, and a board member of Euro NCAP, called the changes “a new yardstick”, adding: “The objective is to encourage makers of larger vehicles to share some of the burden of the impact with smaller vehicles. Historically SUVs and other big cars have offered very good protection to their occupants. However, the smaller vehicles they sometimes crash into can fare less well.

“In the new compatibility test, if the larger vehicle is too stiff in an impact scenario, it will be penalised accordingly. This levels the playing field for all vehicle sizes, which is a win-win for road safety.”

A number of other changes are being introduced to the Euro NCAP crash tests, once assessments resume later this year post-lockdown. A new, sophisticated crash-test dummy - dubbed THOR (Test device for Human Occupant Restraint) - will be introduced, with the new dummy more closely mimicking the behaviour of humans in collisions. The dummy comes at a cost, though, with each unit coming in at around £600,000, more than twice the price of a standard dummy.

Driver status monitoring systems - sophisticated, updated versions of fatigue detection tech - will also be tested. This feature is judged to be vital for heavily assisted cars that require drivers to take back control after systems such as adaptive cruise and lane-keep assist have helped with the driving.

Further updates include an assessment of how badly a driver and front-seat passenger would injure each other during side-impact collisions, while manufacturers that make it easy for emergency services to know where a car should be cut when freeing occupants following a collision will also be rewarded.

Checks on how autonomous emergency braking (AEB) systems are also being ramped up, with systems that intervene when reversing (a system sometimes known as rear cross-traffic assist) gaining marks. AEB systems will also be rewarded if they work when a car pulls out of a junction, in addition to the current test that sees AEB checked on free-flowing road simulations.

Do you agree with the changes to the Euro NCAP test? Let us know your thoughts in the comments section...