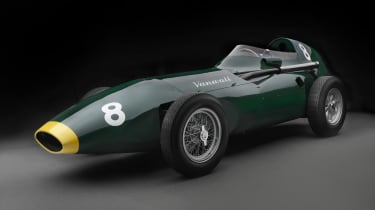 Historic Formula One outfit Vanwall is back, and it’s planning a continuation series of six track-only racers, built to the same specification as the 1958 Formula One World Championship winning VW 5 driven by the great Sir Stirling Moss.

The continuation models will be powered by a reproduced version of Vanwall’s very own race engine of the time. The British firm has sourced its original 1950s blueprints and will faithfully replicate its 2.5-litre four-cylinder unit, which will have the same 270bhp output.

The unit was designed in the 1950s by an engineer from the Norton motorcycle company and, essentially, it was four single-cylinder Manx motorbike engines with a shared cooling system and a custom-made cylinder head. The engine was introduced for the 1954 Formula One season, but its tiny 2.0-litre capacity meant it struggled to keep up with the competition.

Vanwall steadily improved the design of its engine over the coming years, gradually increasing its capacity and reliability until it became a competitive 270bhp 2.5-litre unit. It was still down on power against the likes of the V6-engined Ferrari 246 or the straight-six powered Maserati 250F – but the Vanwall’s superior chassis helped secure the victory. 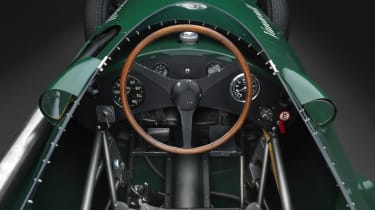 The racer’s respectable road holding was the work of Colin Chapman, who designed the Vanwall’s suspension and chassis – and eventually went on to found Lotus Cars. Unlike most of its contemporary competitors, Vanwall also shunned the usual drum brake setup for a set of in-house designed discs, which helped Moss out-brake the Ferraris.

A couple of other tweaks for the 1958 season – including new Dunlop racing tyres, new steel wheels on the rear axle, a five-speed manual gearbox and better aerodynamics (penned by Frank Costin) – helped the Vanwall along its way. And every improvement made by the historic racing team will be implemented on the continuation models.

Iain Sanderson, managing director of the reborn Vanwall Group, said: “The Vanwall name is too important to consign to history. The Vanwall story is untold to many, but it is a great British tale of innovation and achievement and shows what happens when the right team come together and push themselves fearlessly to reach a clearly defined goal.

“On this anniversary, we think the time is right to celebrate this great British story of success. Faithfully recreating the iconic 1958 championship winning car with six 100% accurate and authentic continuation cars is a fitting tribute to their historic success. The DNA that made those cars so successful also serves as an inspiring foundation for the future of the Vanwall marque, which I look forward to sharing in due course.”

Each example will be priced at £1.65 million (excluding VAT), with only five being offered for private sale. The sixth will be kept by Vanwall and used as the core vehicle in its planned historic racing team.