The new Nissan Note goes on sale in October, we reveal everything you need to know about the car 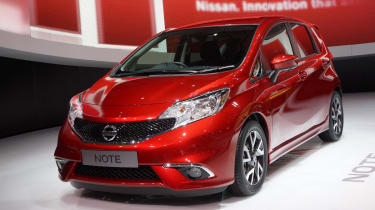 The new styling was previewed by the Invitation Concept at the 2012 Geneva Motor Show, while the production car was revealed at this year's show.

The scalloped flanks and sculpted headlights help give the new car a bold new look. The headlights now interlock with the grille, and there’s a U-shaped crease in the doors. This is called the ‘squash line,’ and is inspired by the flight of a squash ball travelling round a court.

Inside, the information displays on the dash encourage greener driving, while the sliding rear bench seat is carried over from the previous car, allowing owners to easily alter the amount of legroom or boot space.

Nissan Note dimensions The new Note is the same length and width as the current car, with an identical wheelbase, but is a little lower, and boot space is up from 280 to 300 litres.

The Around View Monitor uses four cameras on the car (one on the front grille, one in each door mirror and one in the rear windscreen) to give drivers a full 360-degree birds-eye view of the car. This is then displayed on the car’s 5.8-inch screen.

Despite being mounted at the rear windscreen, it gives 180-degree visibility. This means that if another vehicle is detected in the car’s blind spot it will alert the driver with a light in the Note’s wing mirror.

It also works in a similar way for the lane departure warning, and will detect if the car is veering out its lane without the driver signalling and will alert them to correct their driving position. This then adapts its sensitivity on rural roads to allow the change in driving style.

Finally, for the moving object detection it works in a similar way to a standard parking sensor, but an audible and visible alert will warn the driver of a moving object, like a child walking behind the car.

The systems use wide-view camera at the rear, rather than radar. To ensure they work in poor weather, the camera is self-cleaning and incorporates a water jet and blow-dryer.

Prices for the Note have yet to be revealed but we wouldn't expect prices to start from around £12,000. It will go on sale in October.