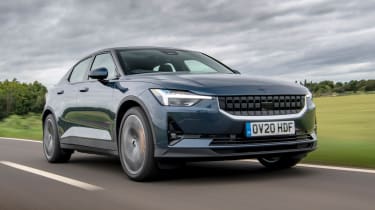 This is the first real rival for the Tesla Model 3 and a good one at that. It’s arguably more stylish with a better-built, more traditional cabin and will appeal to those who just don’t want a Tesla. But ultimately it’s not quite as fast and won’t go quite as far as a slightly cheaper Model 3, while the firm ride might get a little tiresome. If you can live with that, though, it’s another great reason to consider going all-electric.

Mention Polestar to many people and they’ll still have that look on their faces that tells you they’ve no idea what you’re talking about. So to recap: it’s a new premium electric car brand that’s owned by Chinese giant Geely and its Volvo subsidiary, designed and engineered in Gothenburg and built in China. Oh, and the CEO is Thomas Ingenlath, Volvo’s former design chief, which explains a few things, too.

The first being that this is one super-stylish small saloon car. Only it’s a hatchback – a trick of the designer’s pen. There are some fabulous design details that are just the right side of tasteful, a huge amount of tech on board and, but for the badges, you’d easily mistake it for a Volvo.

It’s also the first model that’s aimed directly at the Tesla Model 3 – our reigning Car of the Year – with spec and prices not too far from the all-electric American.

So let’s get the numbers out of the way first then. The base price of £49,900 gets it just into Plug-In Car Grant contention, so after the £3,000 contribution you’ll pay £46,900 plus options, and there are only a few – some wheels, paint, leather and a £5,000 performance pack with adjustable Ohlins dampers ­– to choose from.

The 78kWh battery will go for a claimed 292 miles and you can charge at speeds of up to 150kW. Put your foot down and you’ll get from 0-62mph in 4.7 seconds, while you’ll enjoy 403bhp of power and an instant 660NM of torque. And there are considerably fiscal benefits to running a zero-emissions EV, too.

It’s also pretty much on par with the Model 3 for size ­– a little shorter, a little wider, but a fair bit heavier, mostly down to the CMA platform the Polestar shares with the Volvo XC40; a platform that can be used for internal combustion engine cars as well as plug-in hybrids. That might seem a bit odd as, once the limited edition Polestar 1 has been and gone, Polestar will be an all-electric brand. 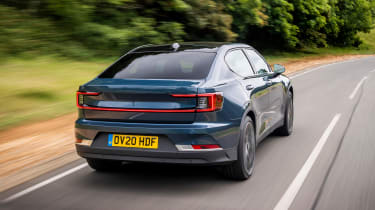 Cabin space is broadly similar to the Tesla, too, so there’s plenty of room up front, although the rear is a little tight for adults in the Polestar 2, as is the door aperture – the Model 3 is slightly better. As the CMA platform has to do more than just electrification, there’s a transmission tunnel for anyone sitting in the centre to deal with, while the full-length glass roof is a beautiful thing, but robs you of a little bit of head space. The view out the back is pretty poor, too.

The boot is also smaller in the Polestar than the Tesla – 405 litres versus 425. However, while the Tesla is a saloon, the Polestar gets a much more usable hatch – again contributing to the extra weight. The Tesla’s ‘Frunk’ or front trunk is also slightly more usable – you can just about get a couple of charging cables in the Polestar’s, but the charging port is at the back.

There’s also a strong tech story with Polestar, who’ve jumped into bed with Google to make the Polestar 2 the first car with an Android operating system and Google Assistant on board. It’ll slot nicely into your Google life, but less so if you’re an Apple devotee. There’s currently no Apple CarPlay – it’s coming, apparently – while Polestar says it’s talking to Google about adding Apple apps to the Google Play store. Good luck with that.

The Polestar 2’s cabin is a far more traditional thing than the Tesla’s and that will appeal to many. There’s an 11-inch touchscreen, which is a slick operator and looks great among a beautifully designed cabin – it really is a great place to sit with comfy seats and easy to use (and find) controls, as you’d expect from a company in Volvo’s fold.

Build quality is impressive first time out – helped by a cleverly curated selection of materials. There are some harder plastics in the centre of the cabin, but they’re nicely designed and sit alongside other premium finishes like the Scandinavian wood inlays and plush material across the dash. The key, though, is unforgivably cheap – if it was made of Lego it would be better quality.

The Polestar 2 apparently comes with ‘vegan as standard’ meaning those materials are carefully sourced, although there was leather in our test car – a £4,000 option. Our car also featured 20-inch wheels rather than the standard 19-inchers, upping the price by a further £900 and doing nothing to improve the ride quality. 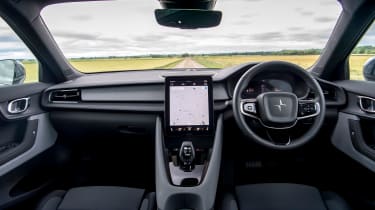 We wouldn’t call the Tesla Model 3 a great riding car and we’d say the same about the Polestar 2; it’s firm and will jiggle you about a fair bit. It’s not a deal breaker, but we’d hope the standard smaller wheels might take the edge off the crashiness over the worst surfaces, of which the UK has many.

As the ride suggests, Polestar is being sold as a sporty brand and with power split 50/50 between the electric motors on both axles and a 50/50 weight distribution things look good. We can’t deny the Polestar 2 grips well as you exit sharp corners or push on through longer bends – it’s confidence inspiring.

You can feel the weight of the batteries tying the car down to the road, too – not a bad thing. Then, of course, there’s the sheer delight in being able to put your foot down at any speed and getting shoved back into your seat as the car powers forwards.

It doesn’t feel quite as alert as a Tesla Model 3 Long Range (which, as the name suggests, will also go further on a full charge), but you can still have a whole lot of fun when you get a chance to put your foot down.

Sadly, the steering doesn’t quite join it – it feels weighty and direct, but lacks tactility. BMW and Mercedes do it much better, although how they fair with an all-electric Model 3-sized car remains to be seen.

The Polestar is impressively quiet, though – even over gravelly surfaces, the noise isolation is impressive; the cabin is calm, serene and relaxing, whether you’re driving around town or on the motorway. It’s just a shame the ride errs on the side of sportiness rather than comfort.

What Polestar does promise, though, is a different way to buy your car. It’s all done online or via Polestar Spaces – a no-pressure sales environment like an Apple Store. Or a Tesla one. The first two Polestar Spaces will be based in London and Manchester with more to follow.

If you can’t get to a Polestar Space, they’ll deliver a car to you for test drive and you can order online. A selection of Volvo dealers will provide after-sales backup, with Volvo’s parts infrastructure also in support.

Geely and Volvo have invested heavily to get Polestar this far, but it’s only the start of the story and that of the Polestar 2. A two-wheel drive version with a smaller battery is expected to arrive with the next year, which would bring the price down to closer to £40,000 and maybe also be slightly comfier over bumpy surfaces. 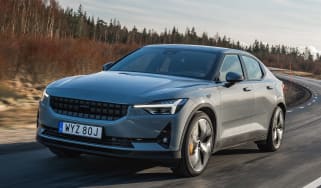