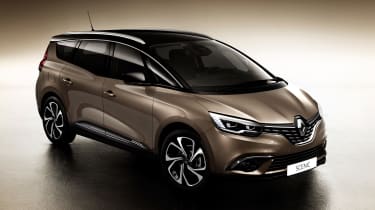 The new Renault Grand Scenic has been revealed, with the seven-seater MPV getting the same 20-inch wheels and crossover-style design as the Scenic, which was revealed at the 2016 Geneva Motor Show.

It’s longer, wider and rides higher than the previous Grand Scenic, and gets more space inside as a result. The boot is 40 litres bigger than before, at 765 litres in the five-seat version, but you can also choose to add two extra seats at the back. It’s much bigger than the new Scenic, too, which has a 572-litre load bay.

The new Grand Scenic has a shorter rear overhang than before, with a grey diffuser in the rear bumper, sculpted side panels, L-shaped rear lights and Renault’s distinctive family face with the oversized logo. A panoramic glass roof, standard 20-inch wheels, roof rails and the long, Espace-like roofline mark out the Grand Scenic, too. 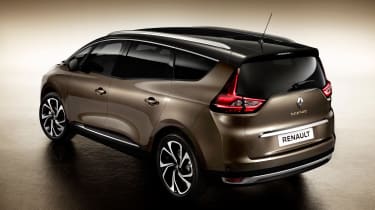 A sliding centre console tucks below the display screen in its most forward position, but can also be set back to create more open space in the front. Folding tables in the back are built to accommodate tablet computers, and there are USB ports to plug them into as well. Sunblinds in the back will prevent glare on the screens, too.

The rest of the interior matches the new Scenic and Megane, with the distinctive portrait display screen with Renault’s R-LINK 2 system sitting in the centre of the dashboard. This features sat-nav, telephone, radio and other applications, all controlled via the touchscreen. A colour head-up display and a Bose sound system are carried over form the new Scenic, too. 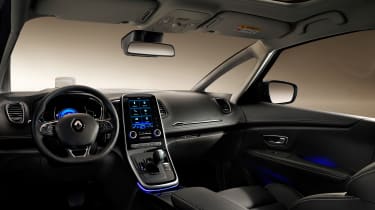 There are four diesel engines to choose from, including one hybrid version, and two petrols. The dCi 110 comes with either a six-speed manual or a seven-speed dual-clutch automatic gearbox, while the dCi 130 is manual only and the dCi 160 gets a 6-speed automatic ‘box.

Unusually the diesel-electric dCi 110 Hybrid Assist comes with a manual six-speed gearbox. The petrol engines are both manual-only, with the options being the TCe 115 and the TCe 130.

What do you think of the new Renault Grand Scenic? Let us know below!