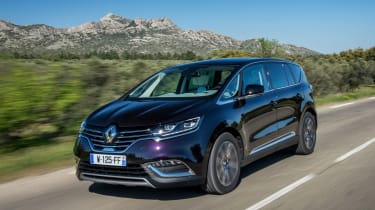 Renault has no plans to sell the fifth-generation Espace in the UK. However, if the holiday rent-a-car rep offers you a choice of petrol or diesel, we’d pick the oil burner every time. Not only does it feel more responsive thanks to the extra 120Nm of torque, it’s also significantly cheaper to run.

Despite Renault’s intention not to bring a right-hand drive Espace to the UK, it has hinted that the new MPV-come-crossover styling may find its way onto other mainstream models in the not-too-distant future.

Earlier this month we got an early drive of the new Espace diesel, and now we’ve taken the wheel of the turbocharged petrol to see how it stacks up against more conventional rivals. 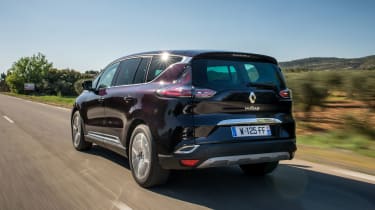 Lifting the 197bhp 1.6-litre engine from the dinky Clio RS is no mean feat for a seven-seat MPV. Despite being 250kg lighter than before, the Espace still tips the scales at more than 1.6 tonnes – around 400kg more than the Clio.

It shows, too. The normally exciting four-cylinder turbo never feels fast – and the lowly 260Nm of torque is some 120Nm shy of the diesel we drove a few weeks ago. While it’ll easily keep up with traffic, it’s far from exciting. 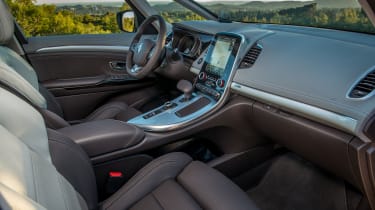 It’s clear Renault has placed an emphasis on comfort – despite claiming this fifth generation model is more fun to drive than its predecessors. No matter which of the five driving modes you put the car in, it wallows and floats round corners rather than attacking them with any finesse.

The 4CONTROL four-wheel steering system we tested in the petrol car works well, but the Ford S-MAX is a much sharper drive, and proves you needn’t sacrifice comfort for driving dynamics. 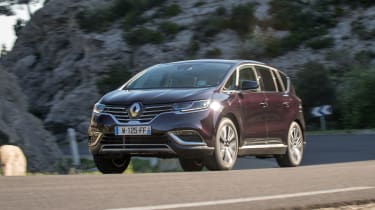 The EDC gearbox doesn’t feel as quick as comparable setups from VW Group cars, either. This isn’t helped by the lack of steering wheel-mounted paddles – and if you try to use the shift-by-wire lever on the centre console, it won’t always give you the gear you ask for.

However, in top-spec Initiale Paris trim, all this pales into insignificance. Renault has thrown everything at its flagship model – with all but the panoramic roof included as standard. That means unique 19-inch alloy wheels, exclusive colours, full Nappa leather and heated massage seats. 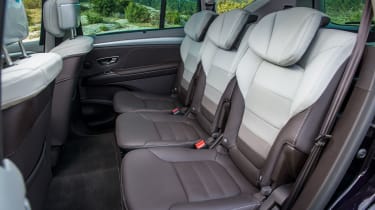 Initiale cars even get laminated side windows – which when paired with the hushed petrol engine, makes for impressively quiet cruising.

In France, the Initiale Paris version of the Espace commands a premium of around €4,000 (£2,850) over the next-level Intens specification, and includes things like concierge servicing and an improved dealer experience. 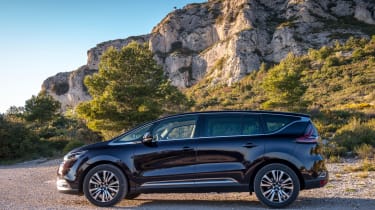 It’s a shame the new Espace doesn’t drive as well as it looks, because as a piece of design and technology, it’s up there with the best.

While our verdict might not be of immediate interest to British buyers, the fact that we could see styling influences cross over onto lesser models in the Renault range, is an exciting prospect.