Car fans who visit any French city can't help but notice a strange phenomenon. High-flying executives have shunned their posh saloons and instead are being driven around in MPVs. 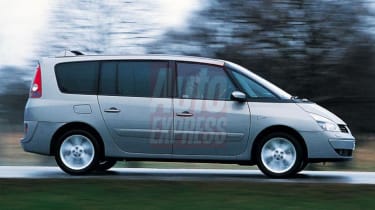 Renault's latest heavyweight MPV is stylish and well equipped, with bags of character. The price will deter many, but there's room for seven in the Grand and the driver soon gets used to the size. The 3.0-litre V6 diesel feels like a smooth performer, but with poor economy and high CO2 emissions, it might not make financial sense.

Car fans who visit any French city can't help but notice a strange phenomenon. High-flying executives have shunned their posh saloons and instead are being driven around in MPVs. Often used as mobile creches on this side of the Channel, people movers over there are appreciated for their space, and are loaded with extras to become limos.

Renault caught on to this trend early on, and has always marketed the Espace as a cut above more mainstream rivals. The fourth-generation model has got even posher, so has it become just too swish for the British? We climbed behind the wheel of the first right-hand- drive version in the UK to see if the chic looks and comprehensive equipment could become part of family life here.

The first thing to hit you is the Grand Espace's size. It's immense, but clever styling - especially at the rear - means it looks clean and well finished. Our test car boasted a sliding panoramic sunroof that makes the roomy interior feel even more airy. However, at £1,200, it's strictly for those with deep pockets.

Once inside, you realise the imposing dimensions make for a thoroughly usable seven-seater cabin. The Espace wrote the book on MPV design, and it shows. All five rear seats slide back and forth and lift out to reveal a vast load area for when you leave your passengers at home. There's enough room for adults, too, so the Espace is a sensible choice for anyone who regularly needs to carry tall occupants.

The dashboard is equally impressive, with the centrally mounted digital pod giving clear readouts and adding to the symmetry of the smooth cabin. Due to their unconventional location, some of the controls take some getting used to, but it works fine with a bit of practice.

The engine line-up is strong, with three petrol units and three diesels. A 16-valve 2.0-litre powers the entry-level model, while other petrol versions get a 2.0 turbo or a 3.5 V6. The diesel trio kicks off with the 1.9 dCi, followed by a 2.2 oil-burner, but we tried the flag- ship 180bhp 3.0 V6 to see if it can tempt conservative petrol buyers. The Isuzu unit already powers Saab's 9-5 and is destined for Vauxhall's Vectra and Signum. Performance is good, and while there is a clatter in the background, refinement is a step forward for Renault.

Economy is in the region of 29.7mpg, which is poor, and the on-board computer said we were getting less than 20mpg on our largely city-bound test. A 252g/km CO2 figure is equally horrific, and is sure to deter company car buyers with a 35 per cent tax rating.

But the ride is much improved, with an underlying firmness that does wonders for the handling. Steering is precise, too, which makes it easier to steer the Espace through tight city streets. Our model's five-speed auto gearbox is well matched to the engine, although the sequential manual override offers little advantage and you soon find yourself leaving it in auto and enjoying the ride.

Prices reflect the car's elevated status, and range from £19,130 to £33,735. Both Espace and Grand Espace will be offered in four trim levels, with our Privil