Having pioneered the MPV in Europe, Renault has again stolen a march on the opposition with this fourth-generation Espace, thanks to its unrivalled engine range. 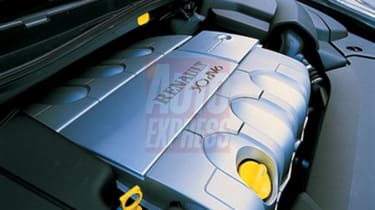 Although the 3.0-litre dCi unit punches its weight in the Vel Satis, it feels short of firepower in the heavier Espace. While cross-country jaunts may be tiresome, the V6's refined nature will turn any motorway marathon into a really comfortable cruise.

Having pioneered the MPV in Europe, Renault has again stolen a march on the opposition with this fourth-generation Espace, thanks to its unrivalled engine range.

Based on the French firm's all-new Vel Satis/Avantime platform, the latest Espace comes with six powerplants. Of particular interest is the 180bhp 3.0-litre dCi engine, which alongside the older 120bhp 1.9 and 150bhp 2.2 dCi units, makes up a trio of diesel powerplants. The new engine, introduced in the Vel Satis, delivers 350Nm of torque and feels strong and refined. Easily the quietest Renault diesel yet, it ensures the Espace is a fine motorway cruiser. But it's less convincing on back roads, as it lacks punch or character.

Given that diesels attract buyers wanting to save money, Renault's projected fuel economy of around 30mpg for the V6 dCi seems wishful thinking as the best we could manage on our initial drive was some way below that. And a C02 rating of 252g/km is not likely to tempt company car drivers. Prices have yet to be confirmed, but a Renault spokesman said that the new Espace will cost around £1,000 more than the outgoing model.

With a revised suspension set-up, the Espace handles better than before, although the over-assisted steering feels too light when cornering. The driving position is an improvement, with reach and rake adjustment for the steering column, and more supportive seats.

Interior flexibility is vastly improved as well. Behind the two front seats, as many as five individual chairs can be moved backwards and forwards or taken out completely. Each comes with a built-in three-point safety belt and headrest, while Renault has also introduced more individual stowage spaces.