Renault has given the Grand Espace 'a light restyle', we find out what that means and if it's any good 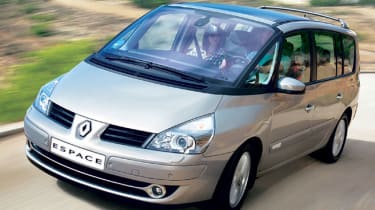 The restyle hasn't dented the visual appeal of the Espace. Yet although the interior is more practical, it's simply not as versatile as the cabins of rivals such as the new Ford Galaxy, or upmarket competitors like Land Rover's Discovery. While the 175bhp oil-burner is efficient and quick, that alone is unlikely to keep the Espace in the lead.

The Espace is being squeezed. Renault's legendary full-size MPV is under pressure from big SUVs and a new generation of trendy 'crossover' cars, such as the Mercedes R-Class. So the French manufacturer has given its challenger what it calls 'a light restyle' to keep it at the top of its game.

While changes to the dramatic exterior are limited to a new grille, bumper and rear lights, there are some major updates inside, where the Espace has lost ground to recent arrivals.

And it's all about practicality. The dash has been streamlined, the seating system changed, the boot floor is now totally flat and a fresh 2.0-litre diesel engine has joined the range.

Inside, the driver faces one information screen - everything else is hidden. The look is futuristic and neat, but rather disconcerting, and it took a few moments to find the radio, which sits in a closed storage unit. The rest of the driving environment remains the same. The seats are large and thickly padded, while all-round visibility is excellent.

Unfortunately, there are no sliding rear doors, or fold-flat seats, but the stowage area is more practical, while the new 'slide and lock' seating system is much easier to use. There is now no need to latch the rear chairs to hooks in the floor. Instead, the seats slide on runners and are secured in place. We tested the Grand Espace, which has six swivelling captain's chairs as standard - a seventh costs £500. The normal Espace has five individual seats, which can be tumbled forward or removed. There's plenty of head and legroom, although even the Grand struggles to swallow seven people plus their luggage.

The new 2.0-litre engine is available with 150bhp or 175bhp, and we tried the latter, which has plenty of pull in every one of the six gears. While it is noisy at idle and under hard acceleration, you rarely have to rev the motor that hard, due to its 370Nm of torque.

You can motor around town in fourth or cruise along the motorway in sixth without having to change down. The manual gearbox is smooth and precise, but the clutch's high position can become annoying, and the steering feels light and over-assisted, particularly when cornering.

More standard kit has been added to each trim level and, as you'd expect from Renault, the safety features are excellent, earning the Espace a five-star Euro NCAP crash test rating. However, despite the additional equipment and extra practicality, the Renault is still expensive compared with rivals.