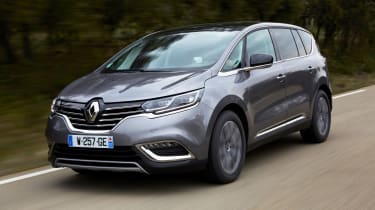 More than 30 years after Renault invented the MPV, this new Espace shows off a sleeker, more modern silhouette with improved cabin quality. There’s a wide range of driver-assistance systems and a revolutionary infotainment interface, while it’s more fun on the road thanks to the adaptive damping, four-wheel steering and lower body. The cabin can carry up to seven, and the new 1.6 dCi BiTurbo diesel and dual-clutch auto box are a good fit.

It’s no secret that Renault won’t be bringing the new Espace to the UK – with MPV sales dwindling, it’s seen as too big a risk. However, as the original European MPV, the legendary name still holds weight on this side of the Channel, and with a capable BiTurbo 1.6 diesel, SUV looks and seven seats, it remains an interesting proposition.

The old car was culled from the UK line-up in 2011, but sales continued with vigour in foreign markets. This fifth incarnation has been totally reinvented for 2015. Gone is the pure MPV styling, replaced by a trendier SUV body: “It brings together the SUV, the MPV and the hatchback,” Renault claims.

The silhouette is less boxy, with a thinner glazed surface on the sides, a lowered bonnet, increased ground clearance and some coupé hints towards the back. The flexible CFM platform from Renault/Nissan has been used, helping to shave some 250kg from the Espace’s overall weight, but the overall length has grown.At 4.86 meters it’s as long as the 2003 Grand Espace and 19cm more than its predecessor. 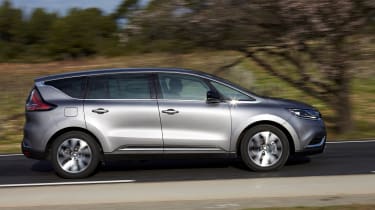 Unlike before, the Renault is available in only one body size, with the option of five or seven seats. The additional smaller and less spacious third row is tight, but should be enough to transport two children – or adults on short journeys.

The 2.88m wheelbase’s been increased from 2.80m on the Espace and 2.87m on the Grand Espace. It helps to offer 680 litres of boot space, or 2,100 with the second row of individually adjustable seats folded flat. This can be easily done using a set of buttons next to the tailgate, or via the huge Tesla-like central infotainment display.

The luxurious interior feels well built and comfortable. Its stylish centre console neatly houses that 8.7-inch, vertically mounted touchscreen, which serves as a universal command centre. Nearly everything can be controlled by swiping your finger on the screen: nav, audio, seat-massage function, head-up display and even driving modes. 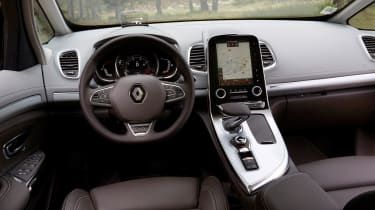 The advantage is that virtually everything is centrally configured – but the disadvantage is that using it takes a while to learn, because sometimes it’s rather complicated and counter-intuitive. Basic driving parameters can be set via Neutral, Comfort, Sport and Eco modes. There’s also a Perso setting, which allows personal customisation of all the different options. Sport gives faster response from the accelerator, as well as stiffer suspension, more direct steering, more responsive gear ratios and a sportier sound. The different settings also play with the ambient lighting and instrument panel colours plus air-conditioning operation.

There are two engine options with three output levels: a 1.6-litre diesel with 128bhp or 158bhp, and a 197bhp 1.6 petrol. However, only the two more powerful Espace models have the smooth dual-clutch auto as standard. 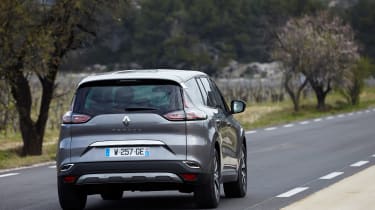 Our favourite is this 158bhp BiTurbo diesel, whose response is more balanced than the petrol’s thanks to offering 380Nm of torque over its counterpart’s 260Nm. In fact, the Espace feels relatively nimble in traffic because this new variation of the 1.6 dCi delivers 265Nm as low as 1,250rpm.

Of even more appeal is that the higher-powered diesel is available with Renault’s four-wheel-steering system, which has a positive effect on overall handling. At speeds of less than 50kph (31mph) in Comfort mode, 60kph (37mph) in Neutral and 70kph (43mph) in Sport, the rear wheels turn in the opposite direction to those at the front, up to a maximum angle of 3.5 degrees.

This favours manoeuvrability around town, making parking a doddle. Above these speed thresholds, the rear wheels turn up to one degree in the same direction as the fronts, for improved handling.