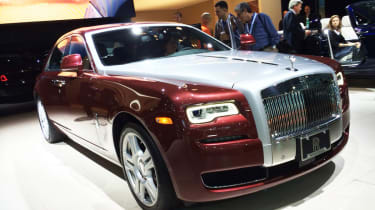 The Rolls-Royce Ghost Series II is a "discreet and considered update of this iconic car’s exterior appearance". If any other car manufacturer did something similar, it would be called a 'facelift' but this is Rolls-Royce.

The Ghost was launched in 2009 billed as the 'baby Rolls-Royce' and designed to nestle below the imperious Phantom in the famous British brand's small but ultra-exclusive model range. By offering the Rolls-Royce experience for 'only' £200,000, the more compact Ghost has been a major driving force behind the brand's recent growth and its manufacturer chose the 2014 New York Motor Show to reveal a comprehensively refreshed version of the luxury saloon to keep that momentum going.

The changes are subtle as you might expect. New daytime running lights adorn the LED headlights at the front above re-sculpted bumpers designed to produce a wider, sportier look. The bonnet has also been tweaked with a strong "wake channel" running from the iconic Spirit of Ecstasy statute back to the base of the windscreen. More paint and wheel options increase the mind-boggling personalisation potential of the car. 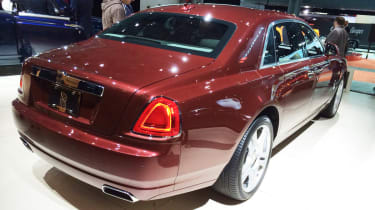 Inside, the Ghost's all-encompassing front seats now have extra electrical adjustments and the rear seats have been rearranged so it's that bit easier to hold a civilised conversation in the back. Tweaks to the beautiful central dashboard clock will go unnoticed by all but the biggest Roll-Royce aficionados, or those in possession of the press release, and there's yet more ways to boost the incredible amount of wood and leather on show via the options list.

The new headlight design on the Ghost isn't just for show. The latest tech is now built in so that the lights swivel with steering inputs and automatically dip when other vehicles approach. Rolls-Royce engineers even claim to have made the Ghost more comfortable and composed to drive with new hydraulic rear axle bearings enhancing the quality of the ride. There's a Dynamic Driving Package too though. This offers more dynamic steering and suspension settings that come into their own when the chauffeur takes a day off. 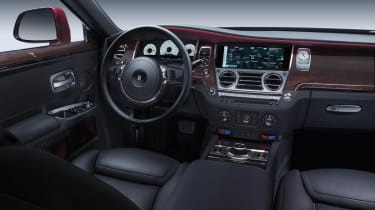 Perhaps most impressive is the new Satellite Aided Transmission that uses GPS data to read the road ahead and make sure the Ghost is always in the correct gear to tackle inclines, roundabouts or motorway exits. Of course, the Rolls-Royce Ghost Series II uses the same 563bhp V12 petrol engine with 575lb ft of torque on tap, so the 8-speed automatic gearbox can virtually take its pick of gears in most situations.

Performance for the short wheelbase version remains sharp for a 2,470kg hunk of luxury like the Ghost. It will ease up to 60mph in 4.8s and on to a 155mph artificially limited top speed. The long wheelbase model is scarcely any slower and still offers the same 20mpg combined fuel economy with 329g/km emissions as the SWB car.

Read all our coverage of the 2014 New York Motor Show here... 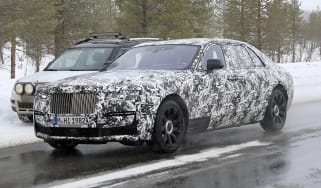 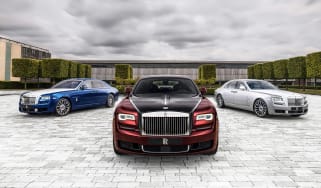