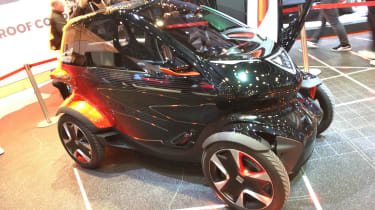 The new SEAT Minimo, an all-electric quadricycle concept, has been revealed to the public at the 2019 Geneva Motor Show. The concept is tasked with handling the concerns of inner city congestion and increasingly stringent emissions regulations. We'll get to see a production version in 2021, according to SEAT bosses.

SEAT’s foray into the sub-compact city transport market follows the firm’s all-electric eXS KickScooter from November 2018. Developed in tandem with Segway, the eXS aimed to both improve city mobility and launch SEAT’s expansion into the urban transport.

The Minimo concept adopts the same “compact urban mobility” brief, being a one-plus-one city car with similar dimensions to the Renault Twizy. It’s only 2,500mm long and 1,240mm wide, which SEAT says makes it suited to city life. Features include 17-inch alloy wheels, asymmetrically-sized doors built to operate in tight spaces and a single central headlight. 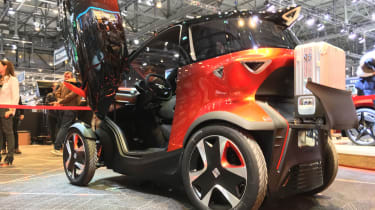 The concept is built on a bespoke tubular aluminium chassis with the bodywork consisting of layered plastic panels, some of which are dyed rather than painted. The seating position is ever so slightly taller than the Twizy's, with the hip points for the driver and rear passenger the same as in the Mii city car.

SEAT’s latest all-electric concept offers a claimed range of 62 miles between charges. To sidestep the issue of charge times, the Spanish firm has also decided to implement a battery-swap system on the Minimo. The battery pack is held in a frame under the concept’s chassis and, once depleted, can be quickly exchanged for a charged unit. SEAT says that each battery module weighs 25kg. The Minimo features four of them, and each can be swapped in a minute flat.

The battery swap programme could be supported by a dedicated smartphone app. However, bosses have indicated that for production, a plug-in model is a possibility. 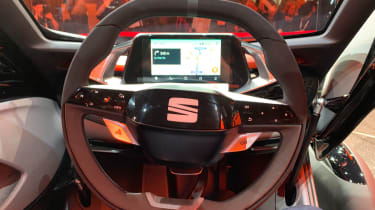 The concept will also feature 5G connectivity, jointly-developed with the Spanish telecommunications company, Telefonica. SEAT says the system will allow communication between the car, the surrounding infrastructure and other vehicles as a first step towards fully-autonomous collaborative driving.

Whether or not the Minimo concept will make it to the UK market is yet to be confirmed, but if SEAT does bring it to these shores we expect it will retail for around £7,000, making it competitive with the Renault Twizy.

What do you think of the SEAT's plans for urban micro-mobility? Let us know in the comments below…