The clock’s ticking if you want to reject a car, as one SEAT Alhambra owner discovered to his cost 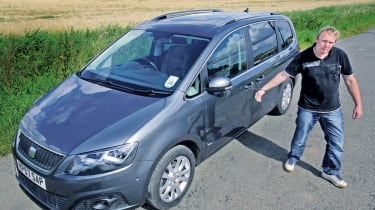 It's well known that if you have serious problems with a new car, you can reject it. But is there a time limit on that process? That’s the question posed by Kevin Palmer, who took delivery of a SEAT Alhambra exactly a year ago.

The car was missing its parking camera. The dealer said there had been a component supply problem because of the Japanese tsunami, and it could easily be fitted later. Kevin took the MPV and £200 compensation for the delay.

In February, the camera was available and the car was booked in. “I was amazed when the garage said it couldn’t fit it, because the tailgate had no blanking plate or any wires built in,” explained Kevin, from Spalding, Lincs.

He claims both the dealer and SEAT customer care said he could get compensation or reject the car, and Kevin chose the latter. “The lady at SEAT kept saying she would get the dealership manager to ring me, but it never happened,” he told us. All I got was reassurance that it was being dealt with, and as far as she was aware, a new car had been ordered.”

Two months later, Kevin was told there’d be no replacement vehicle and he could have £1,000 compensation. He says he was informed there was a brochure misprint, and he couldn’t have the camera with the car he’d chosen.

He explained: “I tow a lot, so the camera is important. SEAT knows I’d never have accepted the car if the dealer hadn’tpromised to fit it when it arrived.

I still want to reject it.” The AA’s legal department told us rejection is only realistic soon after delivery. “There are perhaps grounds for financial compensation here, as this was a necessary item on the car,” said a spokesman.

SEAT told us there was no brochure misprint. It accepts the blame for not getting the spec right when the car was built, and offered £1,500 compensation.

“We’ve apologised to Mr Palmer and have always been willing to support a car exchange, which we will contribute generously towards. But given the 17,000 miles he’s covered, we’d expect a fair contribution from him,” said a spokesman.

Kevin's case: At a glance

The problemKevin accepted his SEAT even though the parking camera was missing, as he was told it’d be fitted later. That wasn’t true and he still wants a car with a camera.

SEAT's responseSEAT accepts responsibility for the problem. It’s happy to get Kevin into a new car, but wants him to contribute due to the wear and tear he’s put on his.

Legal adviceThe AA said it’s only possible to formally reject a new car in a short period of time after it’s been delivered. There’s no exact definition of how long, but success is more likely if it’s days or weeks, not months.

Our verdictSEAT misled Kevin into keeping the car. And it now won’t accept a rejection because of the subsequent mileage. That’s a poor show – it should supply the car he paid for, or refund his money.