Skoda Yeti range expanded with the addition of SE Drive and SE L Drive trim levels, ahead of all-new version expected to arrive in 2018 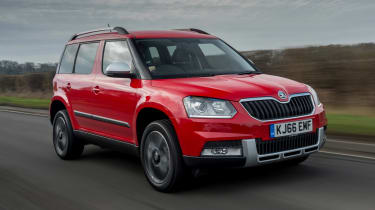 The Yeti SE Drive builds on the specification of the Yeti SE. As standard dual-zone climate control plus Bluetooth connectivity are included, while the new car also features a satellite navigation system with DAB digital radio, an auto-dimming rear view mirror, a heated windscreen, heated front seats and front and rear parking sensors. 17-inch alloy wheels and new seat upholstery round off the additions. Skoda says it is £2,295 of extra equipment for £935 more than the original SE car. 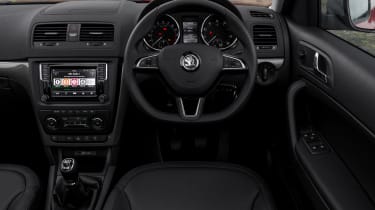 SE L Drive models get these same additions, as well as leather upholstery, LED taillights, part silver roof rails, different 17-inch wheels and Bi-Xenon headlamps. It’s a £755 premium over the standard SE L model, though again Skoda says it's less than half the value of the additional equipment.

Order books for the fresh entries are open now, and three engines are available. The sole petrol unit is the 1.2-litre TSI four-cylinder with 109bhp. Two diesels line up alongside it, both 2.0-litre TDI units with either 109bhp or 148bhp. Four-wheel-drive is optional on the less powerful diesel and standard on the 148bhp version, while a DSG automatic gearbox is also on the options list.

Do the new SE Drive and SE L Drive cars sound like a good deal? Let us know in the comments.