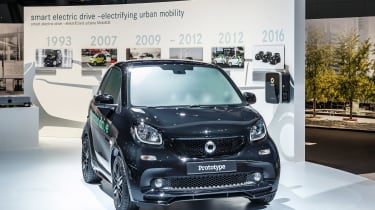 While the big news at Mercedes’ ‘Road to the Future’ event in Stuttgart was the new GLC F-CELL, the maker also announced three electric cars for its Smart sub-brand.

As well as a replacement for the previous-generation ForTwo electric drive, Smart has also revealed plans for a more practical ForFour version. It’s the first time the brand has fitted an electric drivetrain to its four-seat city car – consequently marking itself out as the only manufacturer to offer both EV and conventional petrol powertrains across its entire range.

Launching at the Paris Motor Show in September and appearing in showrooms early next year, the Smart ForTwo and ForFour electric drive models will take the umbrella company Daimler’s pure-EV total to 12 models. As before, the ForTwo will be available both as a hard-top and as a Cabrio. 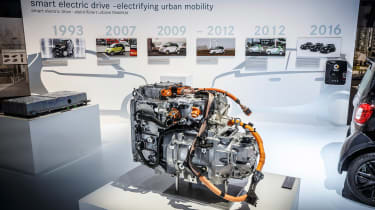 Smart boss Annette Winkler said: “Smart was designed for electric drive right from the start – and ‘living electric’ is our motto as an electric car pioneer. The perfect car for the city is getting the perfect drive for the city.”

The car on show in Stuttgart was only a prototype, and as a result very few details have been released. Smart says the new car will be “as agile and lively as ever”, with the same tight turning circle and similar scope for personalisation – a trait for which the manufacturer has become so famous.

It’s likely to better the previous car’s 90-mile range, while also reducing charge times. Marginal performance improvements are expected across the board, though prices aren’t likely to drop dramatically. Therefore, we can expect the new Smart ForTwo electric drive to cost from £20,000 before any government incentives, with the ForFour commanding a £1,000 premium.

We’ll have more information on the trio of electric Smarts ahead of their Paris Motor Show debut in the autumn.

Would you buy an electric Smart? Let us know below...

Welcome to our Paris Motor Show hub page. Scroll down for all our Paris content...
Used Smart ForFour review 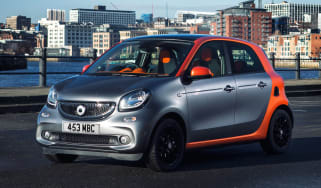