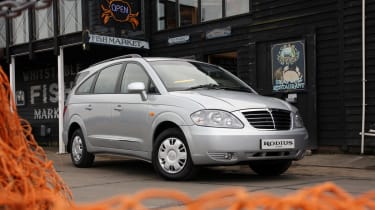 When it comes to delivering the maximum amount of space per pound, the SsangYong Rodius is unrivalled. For the price of a mid-range Kia Venga supermini-MPV you get a full-size seven-seat people carrier that comes loaded with standard kit. There’s also the lure of a tried and tested Mercedes diesel engine, plus the option of a grippy four-wheel-drive system. There are quite a few downsides, though. The awkward styling certainly won’t be to all tastes, while the massive Rodius suffers from driving dynamics that are a generation or two behind rivals such as the SEAT Alhambra and Ford Galaxy.

Given the vast size and huge weight of the Rodius, it’s not surprising that the elderly, Mercedes-sourced diesel engine struggles to perform. The 165bhp 2.7-litre five-cylinder unit is raucous at high revs and clattery at idle, and feels particularly lethargic when mated to the optional five-speed automatic gearbox. Opting for the five-speed manual delivers a slightly quicker 0-62mph sprint of 14.2 seconds, but the clunky, long throw action of the transmission cancels out any performance gains. As you’d expect, the SsangYong doesn’t deliver many thrills from behind the wheel. A high set driving position, decent visibility and light controls make it easy to drive, but the poor body control, numb steering and limited grip count against the Rodius – it’s a world away from the hot hatch-like poise and entertainment delivered by a Ford Galaxy. What’s more, the Rodius isn’t a particularly refined cruiser.

As with the firm’s rough and ready Rexton SUV, the Rodius is cheap to buy but expensive to run. The aging Mercedes engine isn’t particularly efficient, meaning owners are unlikely to see returns of more than 30mpg. Adding to the hefty motoring bills are CO2 emissions of 223g/km for the manual gearbox equipped versions and 250g/km for the automatic, four-wheel-drive EX range-topper. If that wasn’t bad enough, buyers can expect crippling depreciation, with all versions losing more than 75 per cent of their value after three years. Still, the bargain price tag and extremely generous amount of standard kit take the edge off the otherwise bitter financial pill.

There’s just no getting away from the fact that the Rodius is no oil painting. Styled by British designer Ken Greenley, the SsangYong looks ungainly from almost every angle. There’s a choice of S, ES and EX models, with the latter getting the four-wheel transmission from the brand’s rugged Rexton off-roader. Climb aboard and you’ll discover further attempts at bold design, as the instruments are mounted in a large, centrally mounted pod. Despite this feature, the dashboard is actually well laid out, while all models get climate control and keyless entry. Go for the ES or EX and you’ll also benefit from leather trim, plus heated and powered seats. And while the quality of the materials is well below class standards, the cabin is robustly screwed together.

If the rest of the Rodius is well below par, then its practicality is five-star. The huge external dimensions of the SsangYong translate into a remarkably spacious interior – it makes a SEAT Alhambra feel cramped. Unusually for an MPV, there are two seats in the middle row and three in the third row. However, all the chairs deliver bags of head and legroom, while the ability to swivel, fold and slide the seats results in plenty of flexibility. Removing the various chairs and benches isn’t an easy operation, requiring more than one pair of hands, but the result is a van-like carrying capacity of 3,043 litres.

There’s no getting away from the fact that the SsangYong is seriously off the pace in the safety department. All versions have to get by with just two airbags a standard – there isn’t even an option to add extra bags, and we think this is unforgivable on a car that’s clearly aimed at family buyers. At least electronic stability control features throughout the range, although this isn’t enough to boost the Rodius’s poor performance in this area. Reliability shouldn’t be a concern, as the Mercedes mechanicals are extremely hard wearing and the SsangYong feels ruggedly constructed. A five-year, unlimited mileage warranty is further evidence of the car's durability. 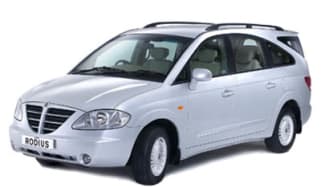 Aimed at the sort of buyer who's looking for value and space the Rodius is certainly a bit left field.
Skip to HeaderSkip to Content