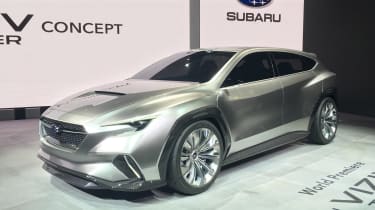 Subaru’s third branch of the Viziv concept car tree has been revealed at the Geneva Motor Show. The Viziv Tourer is designed to preview a future WRX estate to complement the upcoming saloon.

That saloon was previewed by the Viziv Performance Concept at the Tokyo show last year, while a pumped up STI version made its debut in January. The new, 4.77m long concept previews a sleek estate version of the same car, with the same striking front-end design but a unique rear with swollen wheelarches and C-shaped LED tail-lamps.

• Get the latest from the 2018 Geneva Motor Show

Details of the concept are thin on the ground thus far, although Subaru claims it is “expressing the joy of driving and the sense of security” that a four-wheel drive performance estate can offer. A “large cargo space” is promised, while a 2.73m wheelbase is just under 100mm larger than a SEAT Leon ST. The concept will only have space for four, however. 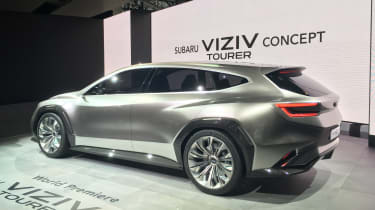 Details of exactly what powers the Viziv Tourer haven’t been revealed, but we do know the production car will feature a boxer engine of some description and symmetrical four-wheel drive. Auto Express previously learned that the more powerful STI version of the next WRX will make use of a hybrid powertrain and a CVT automatic gearbox, and could arrive by 2020.

Subaru plans to launch an increased range of semi-autonomous driver assistance systems with the new WRX range. A more advanced Eyesight system is being developed, with radar and GPS systems benefitting from technological advancements.