The SEAT Leon ST estate joins the hatchback and SC in the Leon line-up, bringing practicality, sharp handling and style 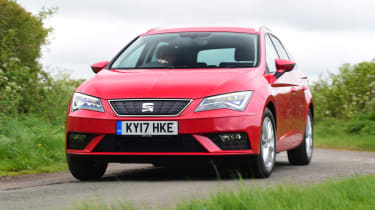 The ST estate is one of four body styles the versatile Leon is available in, alongside the the three-door SC, five-door hatchback and hot hatch Cupra.

This is the first time that an estate version of the Leon has been offered, and SEAT has done a wonderful job of keeping the hatchback’s style intact. It drives almost as well, too, despite weighing 45kg more than the five-door, and the red-hot Cupra 300 edition brings that odd blend of high performance and load-lugging practicality, as a rival to the Ford Focus ST Estate. You can even get the Cupra 300 with four-wheel drive – assuming you’re willing to live with a dual-clutch DSG transmission.

Maximum boot space of 1,470 is a few litres down on both the Skoda Octavia Estate and VW Golf Estate, but still near the top of the class. To make the most of every available inch, though, there are clever touches like a moveable boot floor, handles that flip the rear seats down from the boot and a front passenger seat that folds down to accommodate especially long objects.

The engine line-up was thoroughly revised when the whole Leon range was facelifted in 2017, and the cheapest ST comes with a 1.2 TSI petrol engine. Beyond that, the other petrol engines include a turbocharged three-cylinder 1.0-litre unit (the only engine with fuel-saving Ecomotive technology), a 1.4, and a 1.8, as well as the 2.0-litre unit in the range-topping Cupra 300.

If you prefer a diesel engine – and you may well do, as the extra torque could be welcome in a load-carrying estate – you have a choice between 1.6 and 2.0-litre units, with the larger of the two available with either 148 or 181bhp.

Better insulation means the VW Group's 1.6-litre TDI diesel engine feels smoother in the SEAT than it does in the Skoda Octavia Estate. And, although it's one of the least powerful engines in the range, It never really feels slow, thanks to a slick gearshift and snappy throttle response.

The 1.8 TSI and 2.0 TDI deliver hot-hatch levels of acceleration, but it’s the smaller units that will make more sense in the long run. The twin-clutch DSG gearbox gives the car a more grown-up feel, but can occasionally be hesitant on downshifts.

The Leon ST’s four-cylinder 1.2 TSI engine idles quietly, while the stop-start system is so unobtrusive that you’d be forgiven for thinking it hasn’t engaged. As well as being smooth, the 108bhp engine punches above its weight, with its maximum output available from 1,400-4,000rpm, so there’s always plenty of mid-range punch to make the car feel nice and responsive on the road. 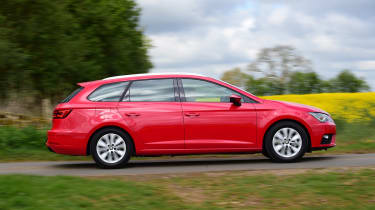 The three-cylinder 1.0-litre engine is impressive, too, and doesn’t feel underpowered. Third gear pull is surprisingly swift when you hit the torque band’s sweet spot, and 0-62mph takes just 9.8 seconds. However, we haven't tested the ST with a full load, and with the boot filled to the brim, there’s a danger the 1.0-litre’s usually peppy character could feel more sluggish.

Loading up regularly would also put a serious dent in the claimed fuel economy, so if the boot is to be put to serious use, it might be wise to play it safe with a torquier diesel. The 1.6-litre TDI can be had for not much more money and offers an additional 75Nm of torque.

The SEAT has an advantage over its rivals for handling thanks to its electronic diff. In corners, this system gently brakes individual front wheels, and as a result the Leon gets around them with far greater agility than its main rivals. It feels stable and has lots of grip, while body roll is kept in check, too.

This performance doesn’t come at the expense of comfort, either. The suspension becomes a little unsettled over bumps, but the Leon regains composure quickly.

The range-topper is the Cupra 300, which packs a 2.0-litre turbocharged four-cylinder petrol engine producing 296bhp and 380Nm of torque. You can have your high-performance Leon estate in two flavours - front-wheel drive with a six-speed manual gearbox, or four-wheel drive with a six-speed DSG dual-clutch automatic. In the second of those two guises it’s actually the fastest of all the Leon Cupra 300 models, with a staggering 0-62mph time of 4.9 seconds.

It feels every bit as fast as those figures suggest on the road, too, although the extra bulk of the estate bodystyle means it’s slightly less happy with sudden changes of direction than the three- and five-door Leon Cupras. Even so, the ST Cupra 300 is a surprisingly comfortable rapid cruiser - and one that has the trump card of almost 1,500 litres of boot space.

Priced at almost exactly £1000 more, model for model, than the five-door Leon Hatchback, the ST commands a bigger premium than the VW Golf Estate, but starts at a lower price. It’s reasonably well equipped, too, with cruise control, Bluetooth connectivity and a split-level boot floor all standard.

Choose one of the smaller diesel or petrol engines, and running costs really are minimal. Most ecnomical of the lot is the 1.6 TDI model, which is capable of fuel economy and CO2 emissions of 68.9mpg and 108g/km. However, the three-cylinder 1.0-litre petrol unit is also very impressive, with vital statistics of 64.2mpg and 102mpg. 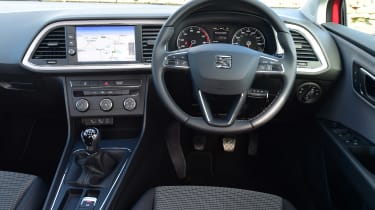 It won’t surprise you to learn that the Cupra 300 is the worst in the range for fuel economy – although it’s still not disgraceful for something with that much performance. The front-drive, manual-gearbox edition of the car manages 161g/km and combined fuel economy of 40.4mpg, while the dual-clutch transmission almost manages to negate the weight penalty of four-wheel drive; that edition returns 39.2mpg and 164g/km.

The SEAT Leon ST is just as stylish as the hatchback on which it’s based. There’s an extra 272mm of bodywork, but the ST has the same wheelbase as the hatchback, at 2,636mm.

Obligatory roof rails (which are silver on SE models and up) and larger rear windows mean the ST is still well proportioned, while the tailgate has a similar rake to the hatchback’s, with the same badge boot handle and number plate set in the bumper.

On FR Technology models and above (and optionally on SE cars), the ST comes with LED headlights, and these add a talking point to the car’s front end, while at the back, the LED tail-lamps also look sharp.

Climb inside, and the only clue that you’re at the wheel of an estate is that the rear screen is a bit further away in the rear-view mirror. That means you get a well built interior with a simple layout that’s easy to get along with. It’s clear that lots of switchgear is shared with the Octavia – especially instruments, minor switches and the touchscreen infotainment system – but everything feels well built, and the gloss metallic grey dash inserts and chrome trim give the SE model a lift. 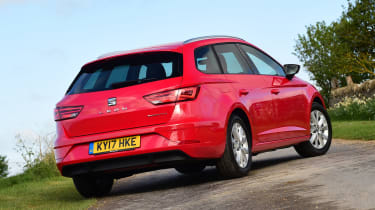 While the seats are trimmed in black cloth, they’re comfortable and offer a wide range of adjustment, plus the light-coloured headlining makes the cabin feel airier. If you want to let even more light in, you can choose the electrically operated panoramic glass sunroof, which is exclusive to the ST.

Cupra 300 versions of the ST get sports seats that manage to be supportive in corners and yet comfortable enough for longer journeys, plus sports detailing on the fascia and a flat-bottomed steering wheel. The Cupra gets 19-inch wheels to go along with its firmer suspension, and the choice of paint colours (bodywork and wheels) means you can have either a subtle rapid wagon or something that wouldn’t look out of place on a British Touring Car Championship grid.

You get a 587-litre boot in the Leon ST, and while that’s 73 litres down on the Peugeot 308 SW, there are some pretty useful touches that come as standard. For starters, the tailgate is lighter than the Peugeot’s, so its easier to open and close, and current SEATs don’t suffer from the same soft-closing problem that proved an annoyance on the last-generation hatchback.

There’s a two-level boot floor, so you can either have a flat floor with the seats folded, or a deep load bay under the cover. With the latter, there’s 56cm to play with, compared with 50cm under the 308 SW’s load cover. 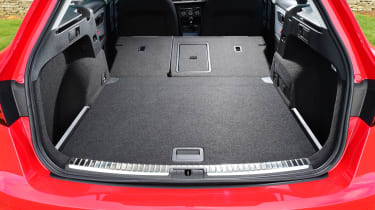 In addition, there’s a deep carpeted well underneath, while SEAT has thoughtfully included slots in the boot trim to stow the load cover under the boot floor. That load cover is far easier to remove than the Peugeot’s, too. The back seats can be folded via boot-mounted levers, and while the floor isn’t completely flat, SEAT does offer a folding front passenger seat on the two SE models, which makes loading extra-long items easy.

In the back, there’s a bit more headroom than you get in the standard Leon due to the ST’s longer roofline, and it feels airy and spacious.

The Leon hatchback earned a five-star Euro NCAP rating, and the ST has the same safety kit, including seven airbags and tyre pressure monitors, although advanced features such as tiredness recognition and a lane-keeping aid are both available as optional extras.

There's more reassurance for potential buyers in the Leon's performance in our 2017 Driver Power survey, where it finished inside the top 10. It was one of the leading cars for front-seat comfort, and scored well for practicality and tech, but it was driving fun where the Leon made its strongest mark. SEAT as a brand did very well, too, finishing in sixth place overall. 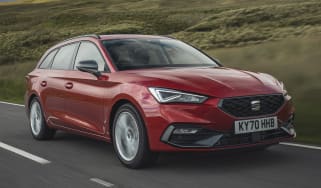 We find out if the new SEAT Leon Estate is as attractive as the hatchback
New 2020 SEAT Leon: PHEV model to cost from £30,970 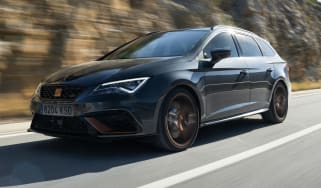 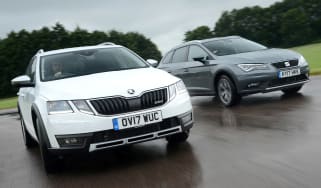 The Skoda Octavia Scout and SEAT Leon X-Perience lock horns on and off road to decide which is better
New SEAT Leon ST 1.0 TSI 2017 review 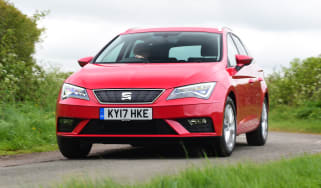 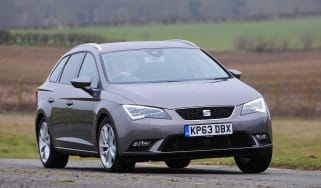 What the Leon ST lacks in outright boot space it makes up for with handy practical touches, plus it's great to drive
Estate Car of the Year 2016: Skoda Superb Estate 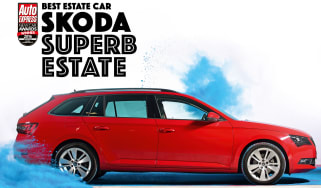 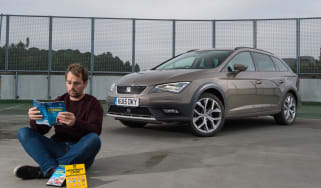 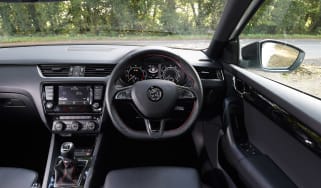 SEAT is the latest brand to enter the rugged estate club with the Leon X-Perience. Can it go further than the Skoda Octavia Scout?
SEAT Leon X-Perience review 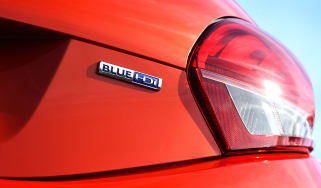 Rugged appearance and 4WD will attract buyers to the SEAT Leon X-Perience, but the price is high
Ford Focus Estate vs SEAT Leon ST & Peugeot 308 SW 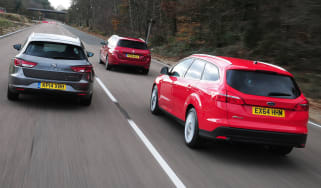 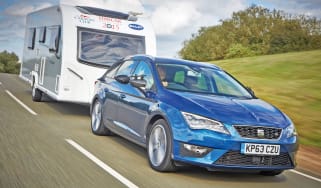 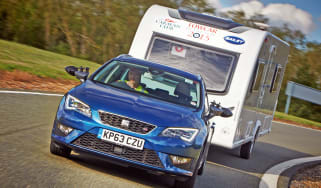 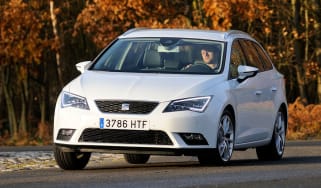 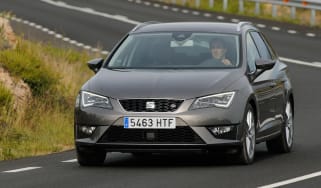 We review the one of the likely big sellers in the new SEAT Leon ST range - the 2.0-litre TDI
SEAT Leon ST estate review 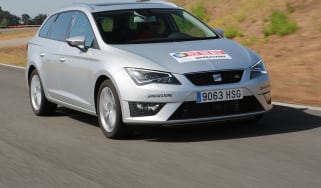 SEAT LEON ST practical estate adds another string to our Car of the Year’s bow, and we get behind the wheel
SEAT Leon ST estate price revealed 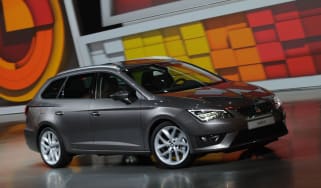 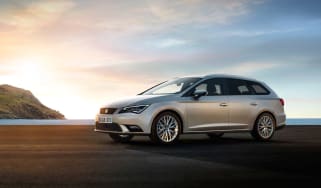 Pictures and details of new Leon ST revealed; car will debut at Frankfurt motor show
Skip to HeaderSkip to Content