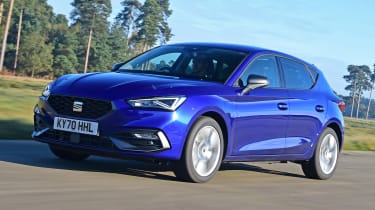 With price on its side, the SEAT Leon instantly becomes one of our favourite plug-in hybrid family cars. The rock-bottom tax costs make it one of the more appealing PHEVs for company car drivers, while private buyers will revel in this car’s usable electric range. Its powertrain is perhaps not quite as slick as the one you find in the Mercedes A 250 e, but the SEAT remains decent to drive and easy to live with. Also available as an ST estate, this new Leon e-Hybrid could well be the consummate all-rounder.

While the new SEAT Leon was the last of the VW Group’s MQB mainstays to launch in the UK, it’s actually the first to be fitted with a plug-in hybrid powertrain.

Of course the Audi A3 40 TFSIe, Volkswagen Golf GTE and Skoda Octavia iV are all just around the corner, but it’s the SEAT we get to sample ahead of the rest. Fitted with a 1.4-litre TSI petrol engine and a 13.1kWh battery, the Leon produces a warm hatch-rivalling 201bhp and 350Nm of torque – plus a zero-emission range of up to 40 miles.

It’s available in all but the Leon’s entry-level SE and SE Dynamic trims – and with prices starting from a smidge under £31,000, it’s one of the most affordable plug-in hybrids on the market; the Kia Niro and Hyundai Ioniq undercut it, but only by a couple of hundred pounds.

The Leon e-Hybrid’s tax advantages are clear. Company car drivers not swayed by the FR Sport, First Edition or Xcellence Lux’s larger 18-inch wheels will bag themselves a car with that quoted 40-mile (WLTP) electric range – resulting in class-leading (six per cent) Benefit in Kind costs.

Still, at this end of the market the real-world cost implications are minor: a higher-rate tax payer looking at the FR and FR Sport models will pay BiK of £1,237 or £1,299 per year respectively. Whichever you go for, you’ll save a decent chunk over the equivalent 1.5 TSI 150PS petrol car, which in like-for-like FR spec will set you back more than £3k a year. 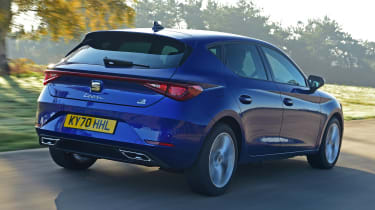 But of course, the usual caveats apply. You’ll need to plug in your Leon e-Hybrid regularly to benefit from this car’s true low running costs. Topping up the battery will take just under four hours via a 3kW home wallbox, or around six hours using a three-pin plug. The resulting range, in our experience, is closer to 30 miles than the published 40 in normal driving.

But that’s still more than you’ll get from either the Hyundai or Kia, and on par with the flashier Mercedes A 250 e – a model many company car drivers will be looking very closely at thanks to its premium interior and upmarket badge. Of course, the SEAT isn’t as posh or plush as its German rival, but you might be surprised at the list of toys – even on basic FR cars.

Our test model was fitted with absolutely no options, yet still came equipped with 17-inch wheels, LED lights, three-zone climate control, a fully-digital cockpit display and a 10-inch infotainment system with ‘Connected’ navigation.

Visually, there’s very little to separate this e-Hybrid variant from the rest of the range. In fact, from the outside, the only tell-tale signs this is the plug-in model come courtesy of the charge flap on the front wing and small badge on the bootlid. Otherwise, it’s business as usual. 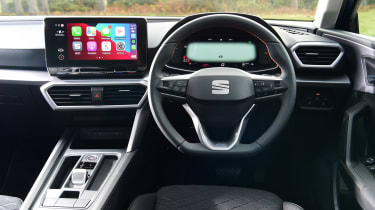 It’s the same story inside, which is to say it’s filled with crisp, digital screens, but otherwise a little dark and dull. Our FR car’s red stitching does little to lift the mood; the Leon offers a functional layout that perhaps lacks the flair of some rivals.

Our first drive of the latest Leon featured the mid-range 1.5-litre TSI petrol engine with 128bhp and a six-speed manual gearbox. Pleasingly, much of what we liked about that car has transferred to this PHEV model; good body control, responsive steering, and a punchy powertrain.

Performance is really very good. Use both power sources and the Leon e-Hybrid builds speed at a frankly alarming rate – 0-62mph takes just 7.5 seconds. The engine can drone under load and at higher revs, but settles at a cruise. In fact, on the motorway you’d be hard-pressed to know whether the petrol motor was firing at all.

The ride is still quite firm, but unlikely to be a dealbreaker. It’s stiff, but the up-side is a level of control missing in many family hatchbacks. The car feels safe and secure at higher speeds – and only really rough or undulating roads upset its composure.

What may be less pleasing to potential buyers is the integration of that battery and the associated electric motor. In e-Mode (the car’s default setting) the Leon is quiet and refined, but the A-Class is better at switching between petrol and electric when running in its hybrid setting. Furthermore, the Mercedes is keener to cut the engine and return to EV power when there’s sufficient charge left in the battery. 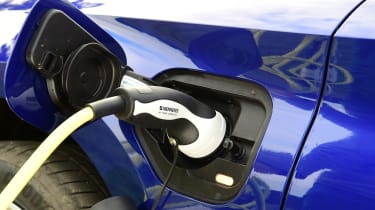 That said, the Leon is surprisingly efficient when its cells are depleted; over 120 miles of urban, motorway and rural roads we managed an indicated 48mpg – similar to what we’d expect from the conventional 1.5 TSI. It’d be possible to double that if you charged at home overnight and started with a full battery, of course.

But the Leon e-Hybrid’s Achilles heel is practicality. SEAT’s evergreen family car has always sat middle of the pack when it comes to boot space and cabin room, and the new model is no different. Space in the back of the hybrid is unchanged, and the three-zone climate control will be a welcome addition for rear-seat passengers.

Yet boot space takes a big hit. The standard car’s 380-litre boot is marginally bigger that you’ll find in a Ford Focus, and it matches the latest Volkswagen Golf – but this hybrid sacrifices a whopping 110 litres to make space for the clever battery tech.

While that may not be a big deal on its own, you also miss out on any kind of under-floor storage, meaning you’ll need to keep the (standard) Mode 3 cable and (optional) three-pin plug alongside your luggage. At least you get a bag to keep things tidy.

Regardless, it’s a minor moan when you consider SEAT offers the same PHEV package in the more versatile ST estate bodystyle – all for just £1,030 more.