Second report: Crossover estate is so full of advice you'd think our man was learning to drive 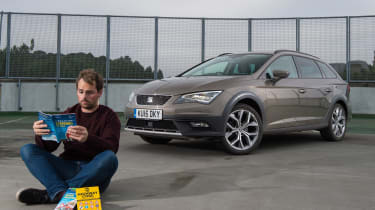 Since its arrival, the SEAT has impressed with its carrying capacity and ability to cope with the daily grind. The niggling ride quality takes the shine off things a bit, but fuel economy of 52.4mpg is impressive given the four-wheel-drive system. So far, so good.

The past few months with our SEAT Leon X-Perience have been fun, but it hasn’t been plain sailing all the way. You see, there are so many messages that flash up on the multimedia screen and trip display between the dials that it feels like our SEAT is keeping an eye on what I’m doing, as if I’m swotting up for my driving test again.

The main culprit is the Eco Tips system that appears on the trip display. The Leon has a recommended gear indicator – just like a lot of other new cars – but the Eco Tips give further advice to help you save fuel.

Messages pop up telling you to change up a gear if it thinks you’re holding on to the revs. Another tells you not to press the clutch when the engine is above a certain rpm. There are also tips to shut the windows when the air-conditioning is on, and when you’re driving at speed to help reduce drag. 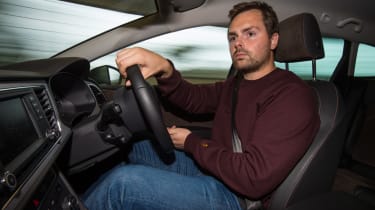 But once you’re over the initial novelty of seeing the tips pop up, they do seem a bit nannying. That’s especially true if you’re overtaking, because the car isn’t smart enough to know that you need to hold on to the gears, and pops the message up anyway. You can turn the tips off via the settings menu on the main touchscreen, though, once you’ve scrolled your way throughthe different sub-menus.

To be fair, this really is nit-picking, as in most other regards, the X-Perience is a joy to drive. It’s surprisingly sporty, thanks to its agile chassis and sharp steering, while the 18-inch wheels add a firmness to the ride that makes up for the extra 28mm of ride height it carries over the standard estate.

There isn’t much body roll, while the 148bhp 2.0 TDI engine has plenty of punch for hauling my camera gear up and down the UK’s motorways. Our car’s adaptive cruise control works pretty smoothly compared to rival systems, but I haven’t used it much. It’s only really come in handy at roadworks, because most of the time I prefer to monitor my own speed. Maybe subconsciously those Eco Tips are making me want to take control. 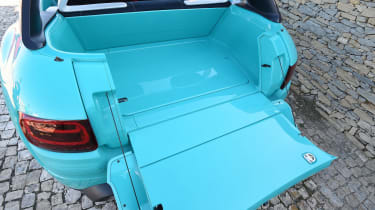 One minor niggle is with boot space. We’ve mentioned before that the Leon ST isn’t the biggest estate around, but it has plenty of useful touches to make up for it. If I’m honest, though, I’d like a bit more volume. The false floor means you get a level load bay with the back seats folded, but the gap underneath isn’t deep enough to be useful for me, and the height the false floor robs from under the load cover is irritating.

At least there’s a space under the floor to store the load cover when it’s not in use, while the dividing net you can install between the load bay and cabin is useful to prevent objects flying forward if you brake abruptly. 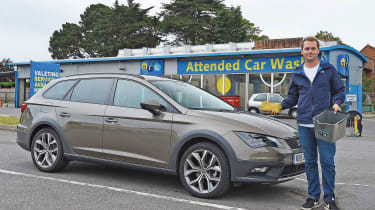 Considering that I drive 50,000 miles every year, it’s safe to assume any vehicle left in my care for more than a couple of months is going to see its fair share of dirt and grime as it pounds its way up and down the country.

As a result, there’s always quite a lot of washing and cleaning to be done – and despite what my colleagues might think, I don’t just drive around trying to make our cars as filthy as possible. However, since the funky-looking SEAT Leon X-Perience joined the Auto Express fleet recently, I’ve found that keeping on top of cleaning doesn’t matter so much.

The rugged Leon estate is the first car I’ve taken on after saying a fond farewell to the Ford Transit Custom. That was white, as you’d expect for a van, which meant it didn’t take long for anyone to realise I’d been racking up the miles. In contrast, my latest car has an amazing ability to hide the muck that gets thrown at it on a daily basis.

The £575 optional chocolate paintjob – Adventure Brown in SEAT speak – isn’t an obvious colour for a model with such a sharp design. However, it complements the Leon’s youthful, outdoor, go-anywhere image – and best of all, from my point of view, it keeps me sailing past the many car washes I come across on my travels. 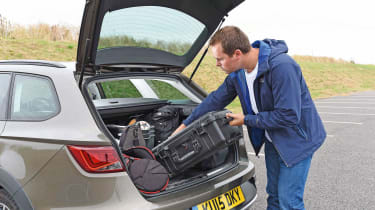 But don’t think I’ve just been won over because the X-Perience allows me to spend less time with a bucket and sponge. It’s also a great addition to our fleet because, so far, it’s been really nice to live with. That might sound bland and boring, but it’s exactly what you want from a car that spends most of its time covering long distances while carrying lots of kit.

As a daily driver it’s been pretty hard to pick fault with, largely due to its super-smooth six-speed manual gearbox and punchy 2.0-litre TDI engine, which combine with the chassis and steering set-up to strike a really nice balance.

The Leon is engaging to drive when my commute permits, and more refined when I just want to glide home after a long day. The ride is on the firm side – especially at the rear – but it calms down and cruises nicely when loaded up with my camera gear. Which brings me on to another plus point.

The space on offer is great, with the boot swallowing a healthy 587 litres, or 687 litres once the moveable boot floor is lowered, and then 1,470 litres with the rear seats down. So there’s no problem battling for space when carting my equipment around with me on photo shoots. 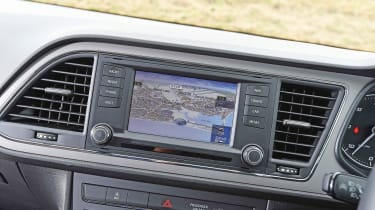 As we’re heading towards the tail end of summer, I’m already bracing myself for the arrival of some nasty autumn weather. I’m sure this paintjob will come into its own, disguising splashback from muddy puddles and grime from heavy rain.

But as we’ll be running the Leon through the winter, too, I hope we’ll be able to venture off-road and really give the four-wheel drive a workout, to investigate the car’s USP – and see if it really is any better than a regular Leon ST.

Our SEAT previously went head-to-head with its VW Group cousin, the Skoda Octavia Scout, but was just pipped to the post. As we’re also running the off-road-inspired Octavia on our fleet, it’ll be interesting to see if the tables are turned after living with both cars for an extended period of time.