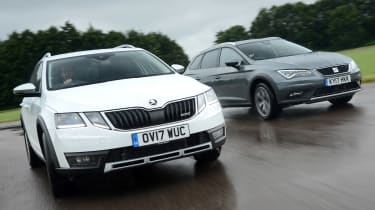 Britain’s weather is notorious for not playing ball. Even in the summer it’s not unusual to get a sudden downpour, while conditions in the winter can be truly treacherous. That’s why cars such as the Skoda Octavia Scout and SEAT Leon X-Perience have gained traction – both literally and figuratively.

These jacked-up, four-wheel-drive estates offer all the practicality you want from a family wagon, along with good grip and all-weather ability, but at a more affordable price than an SUV.

These two latest contenders to hit the market are both from VW Group manufacturers and, therefore, use similar underpinnings, so the difference will come down to how they’ve been set up, the kit they offer and the efficiency they can deliver, as well as the all-important factor of price. We test them on and off road to see which is better. 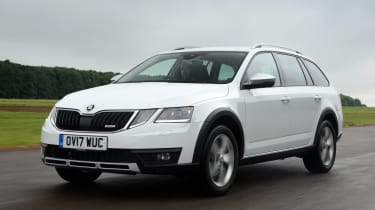 The Octavia Scout adds to the appeal of Skoda’s family estate by featuring even more usability no matter what the conditions. As with the Leon X-Perience, the range is limited to just two engines – both 2.0-litre TDIs with either 148bhp or 181bhp. It’s the more efficient, lower-powered model that we test here, which gets four-wheel drive and a six-speed manual gearbox as part of the package.

We wouldn’t recommend spending the extra £2,795 on the higher-powered diesel, which also gets a DSG dual-clutch automatic gearbox, because this 148bhp version offers more than enough performance for most situations.

In fact, in the torrential conditions on test the Skoda still went quicker than its claimed 0-60mph time, taking 8.0 seconds over the benchmark test. Strong traction off the line thanks to its four-wheel-drive system helped here, but the punchy engine’s 340Nm of torque produced relatively low down at 1,750rpm ensured it was quick enough. 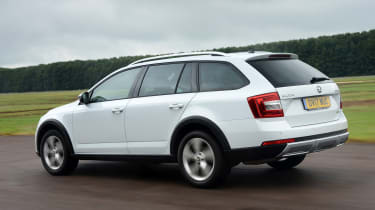 It took 10.2 seconds to accelerate between 50 and 70mph in sixth, highlighting its relative flexibility. It’s better to use the torque and let the engine pull because it’s not the most refined unit when you push the revs. However, the same applies to the SEAT, which uses the same engine.

Where the two differ is in the chassis. The Skoda is much more supple and compliant over rough tarmac, with its 17-inch wheels and taller tyres offering a softer edge to the ride compared with the larger 18-inch alloys on the Leon.

There’s a very slight trade-off when it comes to handling, as the taller Octavia rolls a little more, while the steering isn’t quite as precise. However, at normal speeds on pitted UK roads it’s not that noticeable as the Scout feels planted and secure. The less jittery ride will also be more welcomed by occupants on longer journeys, where the extra comfort will help improve its cruising ability. 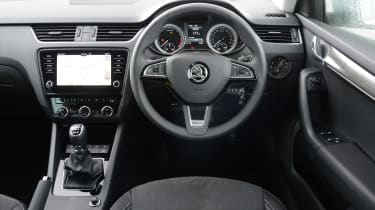 Another factor that’ll boost its appeal over the SEAT is the Skoda’s practicality. It has a bigger boot at 610 litres compared with the Leon’s 587-litre load bay. The difference is because the body and wheelbase are slightly longer, which also means more room inside for passengers.

Those occupants get a decent level of kit to play with, too, as the Scout sits towards the top end of the Octavia Estate line-up. Full LED headlights, upgraded infotainment with sat-nav, heated leather and Alcantara seats, cruise and climate control, Bluetooth and parking sensors are all standard. There isn’t much call for any options, unless you want a different paint colour. 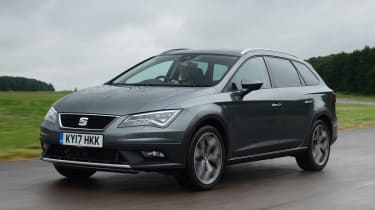 In a bid to plug the same niche as Skoda has with its updated Octavia Scout, SEAT has updated its Leon X-Perience off-road estate, along with the rest of the family car range. This model gets a host of minor updates, including tweaks to the styling, and a revised infotainment system.

You need only a few miles behind the wheel to realise that the SEAT is more direct than the Skoda. It responds more quickly to steering inputs and changes direction with greater agility – partly because the lower Leon rolls less and with larger 18-inch alloys and lower-profile tyres, there’s less squish in the rubber so it grips the road harder. 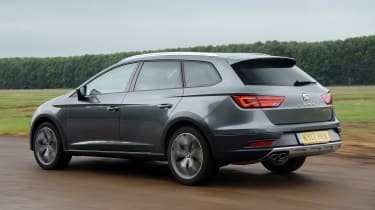 But the damping feels firmer and the Leon isn’t as forgiving as the Octavia. It thumps over bumps more due to its larger wheels and tyres, and doesn’t have the elasticity of the Skoda’s suspension. Like the Scout, there’s no adaptive dampers option; these would broaden the Leon’s ability, but are only available on some models in the regular range.

The SEAT’s sportier approach wasn’t borne out by the car’s 0-60mph time on test as it was slower than the Skoda, taking 8.9 seconds. However, the Leon X-Perience was more flexible than the Scout.

In our in-gear tests in third and fourth between 30 and 50mph it was a few tenths faster than its rival, while it stretched its advantage between 50 and 70mph in top gear, taking 9.5 seconds compared with 10.2 seconds for the Skoda. 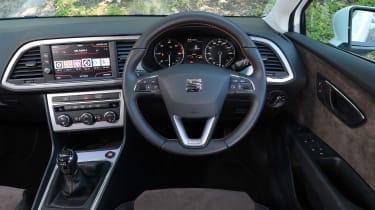 The six-speed manual gearbox’s shift action is tight and gives a nice connection with the car. It’s surprising just how hard you can drive it thanks to the sportier set-up, but this is the same with the regular Leon, so the difference between standard ST and this X-Perience is less pronounced than between the Scout and its two-wheel-drive siblings.

That stems partly from the X-Perience’s off-road performance – or lack of it compared with the Skoda. Granted, these cars fill a niche, but it’s a growing one, and the Leon doesn’t offer quite as much in the way of rugged ability as the Scout, so its appeal is not so broad.

There’s no off-road mode or hill descent control, and although traction on loose surfaces is acceptable, a special mode for the traction control and some more off-road appropriate wheels and tyres would make it a more appealing prospect.

The flip side is that the X-Perience is good on the road, but so is the cheaper, regular Leon estate, which erodes the credibility and undermines the point of this car somewhat. However, four-wheel-drive traction will certainly come in useful in slippery conditions on the tarmac. 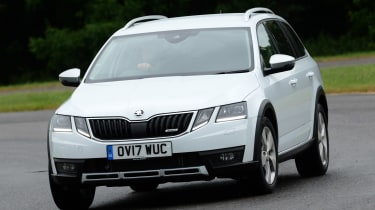 The Skoda is cheaper, more practical, more comfortable and better off-road than the SEAT, which is what defines these cars. That it’ll also lose less money and should be more cost-effective to run for private buyers and business users alike is a bonus. More attractive PCP deals seal the win. 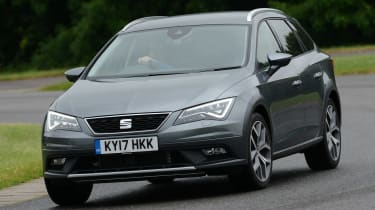 The SEAT isn’t as flexible as the Skoda. It lacks space and the one factor that defines these cars compared with their regular estate siblings: off-road ability. It’s not as rugged and costs more to buy outright and on finance. It’ll be dearer to run and doesn’t offer as much family-friendly versatility.