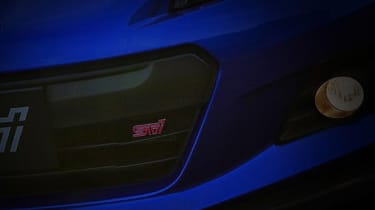 A selection of teaser images of the long-awaited, higher-performance Subaru BRZ STi have emerged. The images were posted on the Japanese website of Subaru's STi brand over the weekend.

The images include a close-up of the car's deeper front bumper that now bears a pink STi badge, an STi-branded strake in the air vent in the BRZ's front wing, and a shot of a winding road with the words 'purity of handling' written on it.

The powertrain the new range-topping model will use, however, is still being disputed. At the launch of the standard BRZ, Subaru told Auto Express that the STi would not feature a turbocharged engine due to limited space in the engine bay. Instead, a revised intake system, freer-flowing exhaust and modifications to the engine’s variable valve control system, along with an increased 7,500rpm rev limit, would take power up to around 250bhp.

However, the turbocharging issue hasn't proved a problem for a host of independent tuning companies that have launched turbo and supercharger kits for the BRZ and its sister car, the Toyota GT 86.

In addition, Subaru has recently launched the new Forester Turbo. This car is already fitted with a turbocharged version of the BRZ's engine, with the turbo fitted beneath the block, which could get around the problem of limited engine bay space.

As well as the power increase, the BRZ STi is also set to shed some weight thanks to racing bucket seats and a potential carbon fibre roof and bonnet, bringing it below the 1,250kg weight of the standard car. Stiffer and lower suspension, and lighter but larger 18-inch alloy wheels will set it apart from the standard car, too.