Next-gen Subaru XV has been revealed at the Geneva Motor Show. It goes on sales later this year priced from around £22,000 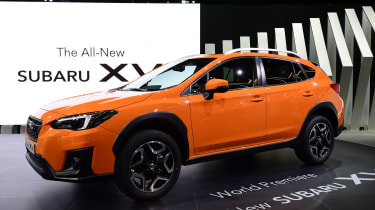 Subaru has revealed its all-new XV crossover at this year’s Geneva Motor Show, sitting on the firm’s new global vehicle platform and equipped with all-wheel-drive as standard. It’ll go on sale in the UK later this year.

Previewed by the XV Concept at the 2016 edition of the Geneva show the production car doesn’t stray far from last year’s design study in terms of how it looks, being a slightly more rugged evolution of the design language used on the outgoing car. A new grille and headlights front a revised face, while a bold character line and new angular folds liven up the car’s flanks. The new wider, lower character of the front end is carried over to the rear as well.

While we’re still waiting for a proper look in the cabin, Subaru promises a spacious interior with an enhanced interior design and improved quality. The seats have been swapped out for new ones, while the dashboard now features an 8-inch touchscreen infotainment system with smartphone connectivity. 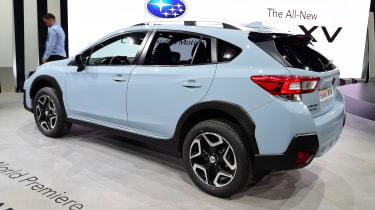 Subaru says that the car’s new platform means the new XV is significantly more rigid than the outgoing one, and paired with “substantial” improvements to the suspension setup, it has achieved a lower centre of gravity with the new car for improved handling. The suspension and chassis tweaks are joined by a torque vectoring system, while an electronic handbrake has been added for convenience.

Unsurprisingly, a 2.0-litre Boxer flat-four petrol finds its way under the bonnet, producing 154bhp. It’s a tweaked version of the engine found in the outgoing VX, which Subaru says it’s lighter and more efficient, while squeezing out a tiny amount of extra power. Power is delivered to the all-wheel-drive system via a CVT gearbox with a mode simulating the feel of a 7-speed auto.

The 2.0-litre Boxer may not be the only engine the new XV will get over its lifespan though. As reported last year, Auto Express understands that a hybrid powertrain is on the cards.

At the 2016 Geneva Motor Show Subaru UK's Marketing director Chris Hawken told Auto Express that the boxer engine will always be a part of the Subaru line-up, though the next XV "will have electrification in the range”.

The news followed reports that Subaru is looking into a mid-engined, hybrid sports car. In that car, sources said, a 1.6-litre turbocharged boxer (flat-four) petrol engine drives the rear wheels and a pair of electric motors powers the front wheels. A more economy-focused version of that drivetrain would be a possibility in the XV, but the engine would almost certainly be mounted in the front with the electric motors at the rear. 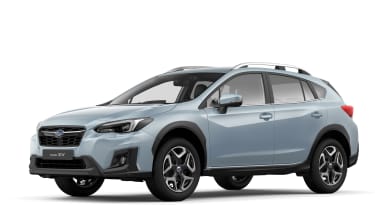 Elsewhere on the new XV, safety and assistance tech such as lane keep assist, adaptive cruise control and pre-collision braking control are set to appear. Prices shouldn’t move too far in either direction of the £22,180 tag of the outgoing model when it arrives in showrooms later this year.

What does Subaru need to do with the XV to make an impact in the SUV market? Let us know in the comments section below...

Welcome to our Geneva Motor Show hub page, scroll down for all our Geneva content...
Visit Used Subaru XV review 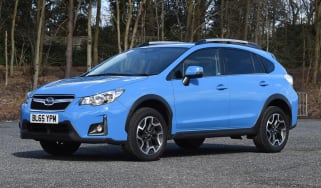