Tesla's Elon Musk has finally revealed the Model D to the public, and it isn't quite what we expected. There's also new autonomous tech. 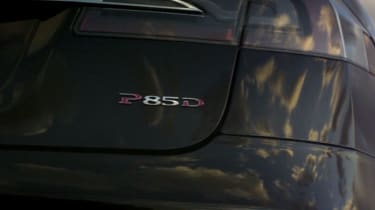 The CEO of Tesla, Elon Musk has finally put an end to rumours of what the much-anticipated 'Model D' might be. We now know that the 'D' isn't a new Tesla model at all but stands for dual-motor, meaning that the current Model S will now be available with four-wheel drive.

There will also be a super-fast P85D, dual-motor four-wheel drive version of the Model S which will have a faintly astonishing 682bhp and 930Nm of torque. It's set to be the fastest accelerating four-door production car ever.

This means a 0-62 time of just 3.2 seconds, a full second quicker than the current Model S. It also manages 1g of lateral acceleration. Musk himself calls it 'insane'.

The P85D is also limited to 155mph (vs 130mph for the standard P85), and it can do the standing quarter-mile in 11.8 seconds. This is despite it weighing almost two-and-a-quarter tonnes with the new motors. It also has 50.50 weight distribution. 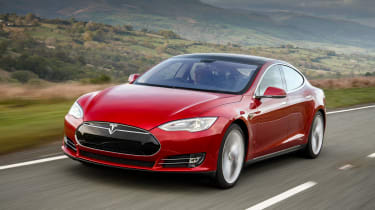 The standard Model S 60D is capable of 125mph, an increase of 5mph, and the 85D with the bigger battery pack can manage 155mph. Amazingly, the four-wheel drive models are claimed to have an even longer range than the standard ones.

But Musk's initial tweet about the model 'D' also mentioned a 'something else'. And at a glitzy launch party in the US last night, that something else turned out to be the letter 'A', standing for a new type of autonomous driving.

Dubbed 'Autopilot' by Tesla, the system will enable the Model S to park itself with no intervention from the driver, as well as drive itself up to where you are waiting (on private property) like a valet service. The advanced system, which uses GPS and sonar, could effectively drive itself around, but Musk points out that safety regulations are not in place to allow this. 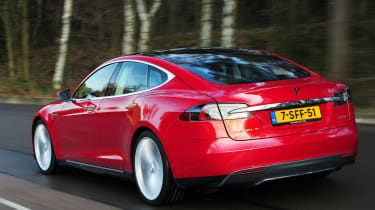 The Autopilot system has, surprisingly, been in production for the last two weeks, meaning that any Model S that's ordered from today in the UK will receive the technology. However, Tesla have conformed to us that a software update will be required before the tech can be fully utilised.

The charismatic Tesla CEO mentioned the system could be adapted to find a charging place for itself, although no details of when that would happen have been mentioned.

What do you think of this latest announcement from Tesla? What will the maverick electric car brand do next? Let us know in the comments section below...