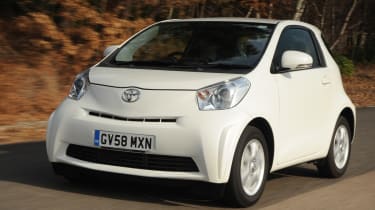 Toyota has to be praised for producing something as unique as the iQ. While it's almost the same size as the Smart, it claims to offer a full four-seater cabin, rather than just two seats. In reality it is extremely cramped but the driving experience itself is very good, and an impressive safety and reliability record will put owners' minds at ease. The iQ is extremely expensive though, with even the cheapest models costing over £10,000. When you consider you can get the larger Aygo for under £9,000, it doesn't seem like such a great deal.

Toyota offers two engines in the iQ, starting with the 1.0-litre three-cylinder petrol from the Aygo city car. Performance is predictably modest, although the iQ feels faster than the on-paper figures suggest. The 0-60mph sprint takes less than 14 seconds and the revvy engine is characterful, while plenty of sound deadening and tall gearing make it surprisingly refined at motorway speeds. The 1.33 litre petrol engine offers more impressive performance with a 0-62mph time of 11.8 seconds. It doesn't sound as characterful though.

Go for the most basic 1.0-litre engine with a manual gearbox and it'll be free to tax thanks to the CO2 emissions of 99g/km. Fuelling the iQ will be cheap too as Toyota claims economy of 64.2mpg. The 1.33-litre unit is worse on both counts but certainly not by much. Insurance prices are also very low on both engine variants.

The iQ is one of those rare things – a genuinely unique car. Slightly longer than a Smart, it aims to pack in seating for four. But while its boxy shape and wheel-at-each-corner stance is distinctive, its looks have divided opinion. It’s aimed at thrusting young town dwellers wanting something small and desirable. However, the Toyota badge does the tiny city car few favours, and it simply doesn’t have the cachet of a MINI, Smart or Abarth. Interior quality and finish are excellent, and we particularly like the centre console layout. The assymetric dash allows the front passenger seat to be pushed right forward, so one adult can sit behind another.

For a car measuring less than three metres long the iQ is a packaging marvel – but it’s sadly a flawed concept. Toyota claims it’s the world’s smallest four-seater, but with an average-height driver there is precious little legroom behind. The front passenger seat is mounted further forwards to free up space behind, so the iQ is realistically a three-seater. At least you can fold the unused rear seat forwards to liberate some boot space because with all of the seats in place there’s just 32-litres – the same size as the fuel tank. There’s also no load cover, so you can’t leave anything valuable in the back.

You get no fewer than nine airbags in the iQ and a five star rating from Euro NCAP. There’s even a world-first rear window bag to protect back seat passengers, while ESP is fitted as standard. Toyota are very reliable cars in general and the iQ hasn't had any major problems associated with it in the past. 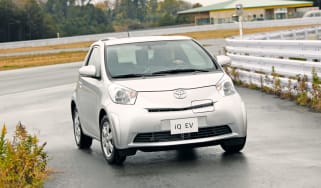 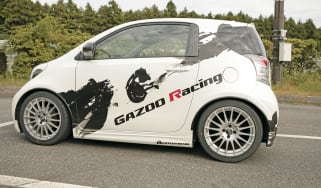 Racy styling spices up city car, but what’s it like to drive?
Visit/toyota/iq/19249/toyota-iq 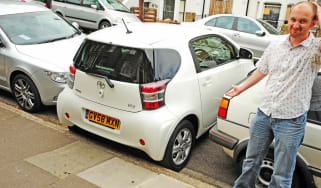 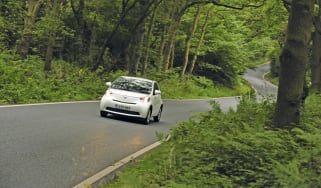 Fourth Report: A summer break for our city car saw it stretch itself on country A-roads
Visit/toyota/iq/19226/toyota-iq-5304-miles 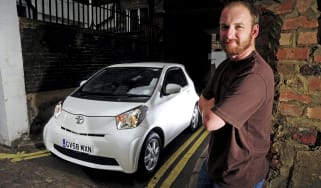 Third report: Tiny runabout is a hit in the city – but it is also proving a bit of an all-rounder
Visit/toyota/hatchback-0 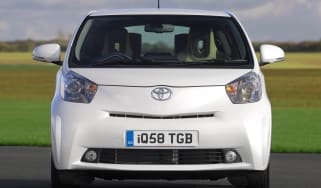 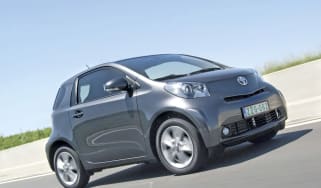 Is baby better with new engine and stop-start?
Visit/toyota/iq/19207/toyota-iq-3969-miles 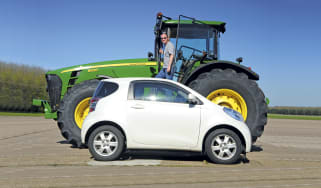 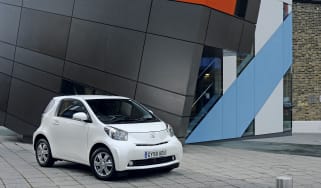 Can Toyota’s revolutionary iQ shake up the city car sector? We stretch it to the limit in three unique twin tests.
Advertisement
Visit/toyota/iq/17359/toyota-iq 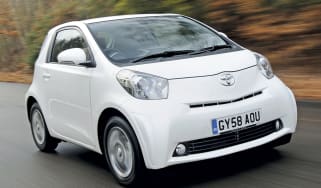 Ingenious... or ill-conceived? We see how bold city car fares now it's in the UK
Visit/toyota/iq/17325/toyota-iq 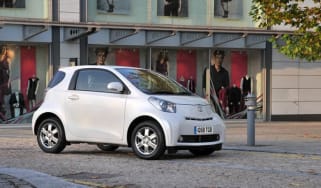 The innovative Toyota iQ has hit the road - but is it as clever as it thinks?
Advertisement
Visit/toyota/iq/17322/toyota-iq 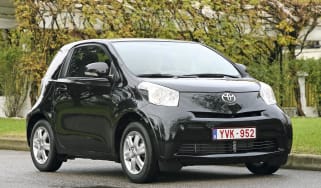 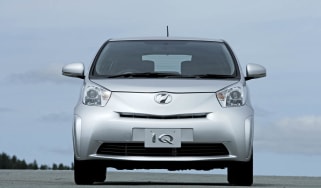 Four seats, the size of a smart... and 70mpg economy! is this the cleverest car in the world?
Skip to HeaderSkip to Content