Four seats, the size of a smart... and 70mpg economy! is this the cleverest car in the world? 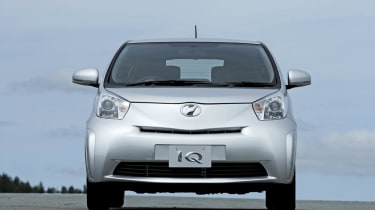 High fuel prices and the need to cut emissions mean small cars have never been more important – so does the iQ point to a bright future for Toyota? Yes it does. The newcomer is packed with real innovation to make for an amazingly spacious little car. What’s more, it’s extremely fuel efficient and environmentally friendly – but this doesn’t come at the expense of quality or equipment. While the driving experience could be sharper, the iQ is a genuinely different type of car that deserves to succeed. And with a price tag that’s likely to start from around £8,500, it’s set to be a hit.

Could this be the car that finally outsmarts the two-seat Smart? On paper, the tiny Toyota iQ certainly looks like a piece of clever thinking, but how does the world’s smallest four-door measure up on the road? To find out, Auto Express became the first magazine to catch up with the newcomer for an exclusive drive.

Due on sale later this year, the iQ heads a new wave of micro city cars – including the VW up! and Fiat Topolino – which will give penny-pinching fuel consumption and low CO2 emissions.

Measuring only 2,985mm long, 1,680mm wide and 1,500mm high, it makes a dramatic first impression. The iQ is much smaller than Toyota’s own Yaris, and only marginally bigger than the Smart, despite its four-seat cabin.

It has greater road presence than pictures suggest, too, thanks to flared wheelarches and ground-hugging bumpers. Engineers pushed the boundaries with a wheelbase that’s 2,000mm long, in the process creating arguably the shortest front and rear overhangs ever seen.

That attention to detail carries on inside, where clever packaging allows the iQ to seat three adults comfortably, with a fourth space for a child.

Real innovation has been required to pack that much space into a car less than three metres long. So the iQ gets a new differential design that frees up 100mm of space over a Yaris, plus compact dampers and a flat fuel tank under the rear seats. In addition, the air-conditioning unit is smaller, while the dashboard and seats have been designed to maximise legroom.

It’s not short on safety equipment, though. There are nine airbags, including an under-thigh bag on the passenger seat (to prevent submarining) and the first-ever rear curtain airbag. Toyota says it expects a five-star Euro NCAP crash test rating, too.

What impresses most is the space inside – the iQ feels as though it belongs in the class above. Interior quality and finish are excellent, and we particularly like the centre console layout. There’s even a push-button starter!

The cabin looks like a standard four-seater, but the assymetric dash allows the front passenger seat to be pushed right forward, so one adult can sit behind another. The space behind the driver is described as the occasional seat, although the lack of steering reach adjustment means the behind-the-wheel position is compromised for tall owners.

Power comes from a Yaris-sourced 1.4-litre D-4D turbodiesel or a 1.0-litre three-cylinder petrol engine from the Aygo. We tried the latter, which in Japanese spec is mated to a CVT auto – UK versions will have a five-speed manual. It should produce around 70bhp, return 65mpg and emit only 99g/km of CO2. The diesel promises 89bhp, 70mpg and 106g/km.

Although the 1.0 will win no sprint contests (0-60mph takes 13 seconds) and is a bit noisy, it’s smooth and the gearbox is responsive. Despite the short wheelbase, the iQ stays firm and planted, with safe and predictable handling. It could do with a bit more feedback from the steering, but the little machine is nippy and fun.

In fact, the iQ is roomier and better to drive than a Smart, and just as striking to look at. The firm appears to be on to a winner.