New 2020 Volkswagen Golf GTD on sale in the UK now

New diesel-powered Volkswagen GTD completes GT-badged lineup – and it has a starting price of £32,790 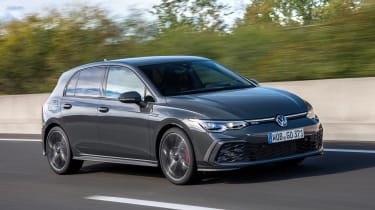 Volkswagen has launched the eighth-generation Golf GTD in the UK. It follows the plug-in hybrid Golf GTE and petrol-powered Golf GTI into the showrooms, completing the German brand’s trio of GT-badged hot hatchbacks.

Prices for the new Volkswagen Golf GTD start from £32,790, which makes it the cheapest model in the GT line-up. However, unlike its stablemates, the GTD is pitched as more of a long-distance cruiser rather than a B-road barnstormer, with a theoretical maximum range of 600 miles per tank of fuel.

Key to this range figure is the GTD’s powertrain. It’s an updated version of the previous model’s turbocharged 2.0-litre four-cylinder diesel engine, which features a handful of efficiency tweaks and a new seven-speed dual-clutch automatic gearbox, to help it achieve claimed WLTP fuel economy figures of between 51.4–54.3mpg.

The new Golf GTD’s diesel engine has an output of 197bhp and 400Nm of torque, which makes it 16bhp and 20Nm brawnier than the model it replaces. Volkswagen says this output is enough for a top speed of 152mph and a 0–62mph time of 7.1 seconds – a figure which trails the petrol powered GTI by 0.8 seconds.

However, despite the performance deficit, the GTD does come with the same chassis upgrades as the GTI. These include 15mm lower sports suspension, beefier brakes, a locking front differential and adaptive dampers that alter with the car’s suite of drive modes. 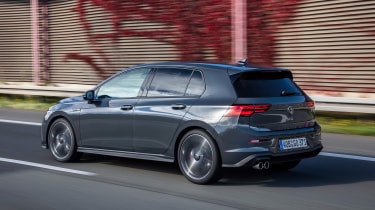 On the outside, the sporty body kit is shared with the GTI, but the GTD has a couple of subtle cosmetic differences. All of the red detailing found on the GTI is replaced with dark grey and there’s a unique design for the standard 18-inch alloy wheels. At the back, a single twin-exit exhaust tip also replaces the GTI’s dual-branch setup.

Similarly, in the cabin, the hot hatchback’s trademark sports seats are finished in tartan fabric – although the pattern is monochrome rather than the usual red. Buyers get a comparable level of standard equipment, too, with three-zone climate control, a leather multifunction steering wheel and an aluminium gear selector.

The GTI’s 10.25-inch digital instrument cluster and 8.25-inch infotainment system are also transferred into this diesel model, along with its customisable ambient lighting system, puddle lighting and electrically operated door mirrors. The technology package is completed with a pair of LED Matrix headlamps and unique honeycomb LED fog lamps.

What do you make of the new Volkswagen Golf GTD? Let us know in the comments section below…