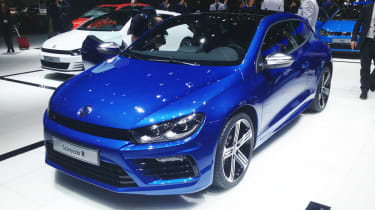 VW has taken the opportunity the showcase its new and facelifted Scirocco at the Geneva Motor Show. While visually, the new model may appear to be a case of a blink and you’ll miss it styling, the German marque has also made revisions under the bonnet, with more powerful but more efficient engines now offered.

The unveiling also marks 40 years since the original Scirocco was first introduced at Geneva back in 1974. Look closely and you’ll notice design cues from the latest-generation VW Golf have been carried over, such as the aero-optimised blades, daytime running lights and fog lights sitting beneath the restyled headlights. If you opt the optional bi-xenon headlights, the daytime running lights are LEDs within the main headlights.

At the rear, changed are also minimal but all models now come with LED taillights, while the bumper has been reshaped. Also, like the Golf, the Volkswagen logo badge now doubles as boot release handle. New-look dials and an auxiliary instrument cluster above the centre console inside, complete the visual changes.

Three other petrol and two diesel engines are offered across the range. The petrol lineup consists of a 123bhp 1.4-litre (up from 120bhp), a new 177bhp 2.0-litre and a 217bhp 2.0-litre TSI engine, which replaces the previous 207bhp motor. Diesel offerings come in the shape of a 148bhp or 181bhp 2.0-litre TDI engine. All come with a six-speed manual as standard, with selected models offered with a seven-speed DSG gearbox.

Despite the increase in power across the range, VW Claims efficiency is also up by 19 per cent, with the engines returning between 68.9 and 34.9 mpg.

The refreshed Scirocco will be available to order in the UK from May, with first deliveries scheduled for September. Pricing will be announced closer to the car’s launch.