Volvo Concept Coupe gives clues about the next generation of Volvos 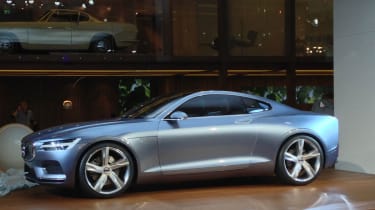 This is the Volvo Concept Coupe, which has been snapped on the Volvo stand ahead of its public debut at the Frankfurt Motor Show.

The Volvo Concept Coupe is the first concept car to be designed by Volvo’s new Senior Vice President of Design, Thomas Ingenlath, and is the first of three concepts that introduce the firm’s new design language.

The concepts reflect the three new pillars of Volvo design – Scandinavian Authority, Creativity and Activity – with the Coupe intended to represent the first.

The concepts point towards the look of all new Volvos, with the first being the all-new XC90. The seven-seat SUV is due to debut at the Paris Motor Show next year, and go on sale here in early 2015.

The Concept Coupe is billed by Volvo as the next-generation P1800 – the firm’s stylish two-door from the sixties. Ingenlath tells us that he and his team selected a coupe as the first design concept as it’s a type that premium cars buyers easily understand.

It’s also a bodystyle that Volvo has a long history with – P1800 included – whose influence on the new concept is clear. The long bonnet, curve to the tail and glazed area pushed back towards the car’s rear are all inspired by the old model.

The Concept Coupe also gives us clues as to the look of some next generation Volvos. The large, flat shape of the bonnet is set to become a brand hallmark, as is the floating grille with its enlarged iron mark logo. Those neat T-shaped LED daytime running lights will make production, as will the upkicked bars in each of the front bumper’s air vents.

The C-shaped LED tail-lights and the BMW-style Hofmeister kink will feature on the next S80 – likely to be called the S90 – while the Audi A5-style crease along the shoulder is also set to feature on Volvo’s next saloons – Ingenlath joined Volvo having spent over 20 years working for VW after all.

The Concept Coupe’s interior is dominated by a central touchscreen and features a minimalist, button-free design. The portrait touchscreen is identical in size to the current iPad and replaces buttons and controls for infotainment, climate control and more.

This will feature on the firm’s new cars, too. But while an iPad needs a fingertip to operate it, the Volvo touchscreen can be used with gloves on.

There is also a heightened focus on the quality of the buttons and controls that are left behind, including the hand-made crystal gear lever. And, while that’s unlikely to make the cut for production, the mix of materials used – aged wood, machined metal and tasteful leather – are all likely to feature on production cars.

Although a coupe isn’t high up on Volvo’s list of priorities, the Concept Coupe is built on the firm’s new in-house Scaleable Product Architecture (SPA) so could be considered in the future.

This flexible platform allows for rakish coupes to be built on similar underpinnings to the new XC90, which will be the first to use the SPA in production form.

The concept also uses the highest power version of Volvo’s new powertrain. This matches a 302bhp supercharged and turbocharged 2.0-litre four-cylinder petrol engine to an electric motor, giving around 400bhp and 600Nm of torque, but returning around 50g/km of CO2. This set-up will be offered in the S90 and XC90.

Volvo has invested hugely in developing its own platform, its own engines and now has a design language that it hopes will see its 421,951 global sales in 2012 almost double to 800,000 units by the end of the decade.