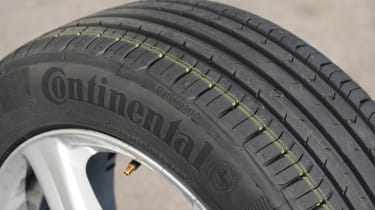 With so many tyres appearing for a second time, it’s useful to refer back to our 2014 test in this popular size. While most have retained their ranking or been overtaken by new designs, the ContiPremiumContact 5 has been little short of transformed; it was only fifth last time. We know tyres are developed over time, but this is a radical change – and it’s remarkable as the design, on sale since 2012, has already been replaced in some bigger sizes by the PremiumContact 6.

If it has a weakness, it’s rolling resistance; the tyre would use close to three per cent more fuel than the best. Elsewhere it is hard to find fault as Continental’s engineers have upped performance across both wet and dry surfaces. It starred on the handling tracks, winning on both (albeit sharing dry glory with Hankook). It had an agility and directness others could only dream of. For a comfort tyre it was pretty sporty next to rivals.

It was a similar story on the wet track where it felt sharp and showed good traction out of turns. One of Continental’s performance targets is braking, and it had a big margin in the wet – more than three metres over the next best. Getting close to the best in the noise test secures another win for this tyre.