There was a time when a budget tyre meant a white-knuckle ride on the wet handling track. That’s not the case for this German-developed Syron. 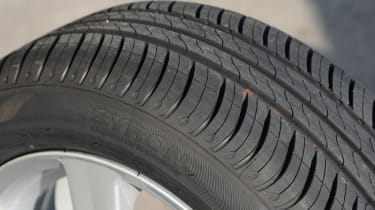 There was a time when a budget tyre meant a white-knuckle ride on the wet handling track. That’s not the case for this German-developed Syron; while it was off the pace and required plenty of lock before we got on the throttle, it felt safe on the circuit.

It starred in the deep-water aquaplaning tests, and nearly took two wins, but struggled elsewhere. Worryingly it took over 10 metres more to stop in the wet than our Continental champ. In the dry, it needed more than five metres longer than the pace-setting Dunlop.

It was closer to the leaders on the dry handing track, where it was balanced but noisy and lacked bite. Although it’s the only sub-£50 tyre here, you’d end up using about seven per cent more fuel than with the best.