Whether you want to stream music or make calls on the go, the latest Bluetooth car stereo head units make it possible whatever your budget 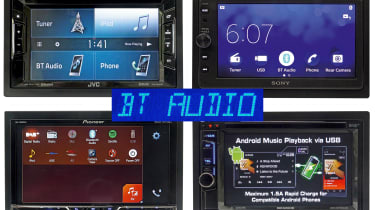 You only have to look at the latest aftermarket head units hitting the market to see how important connectivity with smartphones is in the car these days.

Not only can these connected units relay hands-free calls through the sound system to help you stay on the right side of the law when you’re behind the wheel, but they are also a source of music both direct from the handset and via apps such as Spotify, whether you’re streaming from your mobile or using a wired link.

In addition, many drivers use their smartphones as sat-navs thanks to the accurate and cost-effective traffic alerts on the latest navigation apps.

So good compatibility with phones is essential for head units, and it is often one of the reasons drivers opt to upgrade from the standard systemin their car. So which head unit offers the best connectivity? We paired our phones with eight to find out.

We tested our head units using four phones: an Apple iPhone 5 and 6S, as well as Android-based Samsung S5 and HTC 10 mobiles.

Each system was evaluated for its ease of connection with each phone, both wired and wireless. Call and voice command quality was also rated. Other elements we looked for were the resolution of iTunes and Spotify, including cover art and titling.

Units with screens were assessed for ease of loading and using navigation apps. The final factor was the typical cost; our test head units covered a wide range of budgets, and we took prices from various sources as we went to press.

Seamless and properly resolved phone connectivity sees the Pioneer AVH-Z5000DAB take a narrow victory in this test, ahead of the capable Sony XAV-AX100. The JVC KD-X342BT secures third place on account of its excellent wired sound and great value, while we found the Alpine X802D-U delivered the best-quality Bluetooth audio in this test – perhaps not surprising given its £1,400 price. 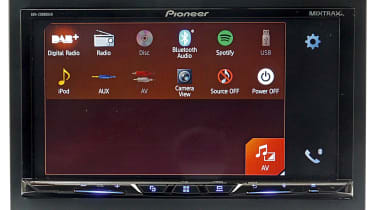 Seven-inch touchscreen double-DIN tops Pioneer’s new 2018 Z series range. Android Auto and Apple CarPlay feature, as does Pioneer’s AppRadio Mode for a long list of music source integration, plus navigation such as Google Maps and Waze. Two phones can be connected, and you can switch easily between the two. Along with the Sony, this had the best plug ’n’ play performance. Voice control involved muting music by telling it to ‘pause’. 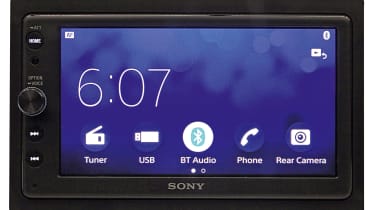 The Sony has a 6.4-inch screen. Its volume knob is easier to use on the move, and it doubles as voice command activation. You get Apple CarPlay and Android Auto, and both pop up when the relevant phone is plugged in. Android transition from plug-in to Bluetooth was clunky. Voice command sensitivity was excellent, including response to calling out numbers to dial. Bluetooth pairing was quick, but wired music resolution was better. 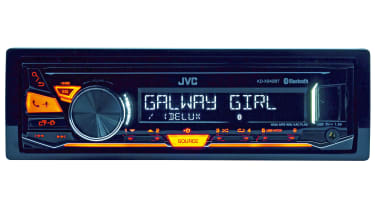 Budget set has a USB port only on the front – a high-current version which supports a hard disc. Plugging in an iPhone brings an almost instant connection and Bluetooth pairing is two button presses away. Song title and artist are clearly displayed. Sound quality was excellent on line in, but trailed on wireless. Plugging in an Android phone told us to download JVC’s Music Play app. Linking was clunky and setting up to ‘Android’ source involved the unit looking at files, not Spotify. 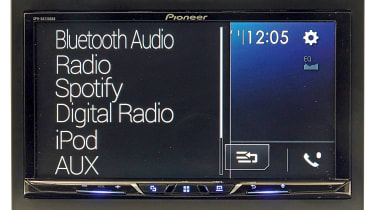 Pioneer’s mechless seven-inch touchscreen is more Android-friendly than most; activate Auto Connect and you can directly go to the USB port for easy browsing of music files. As with most modern head units it’s designed with a priority for Apple integration and hands-free Siri control. Android Auto also brings voice control. Plus, it will integrate Google Maps or Waze for voice navigation. Connection to Android phones was clunkier than with the Z5000, but Apple integration was seamless. 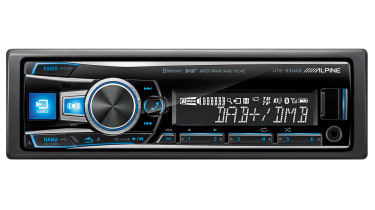 This mechless DAB unit has Alpine’s usual quality, plus Facebook alerts are available. You can also see the music equalisation and other adjustments on a connected phone. It’s Apple-friendly, but caters for Android, and we streamed music easily. We dialled out using voice control, too, but only via Bluetooth. 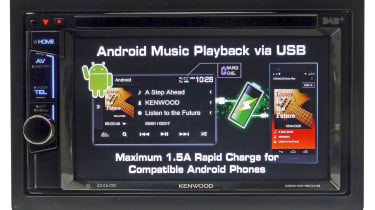 You get a lot for the money here, from the 6.2-inch screen to the DAB+ radio. Bluetooth streaming for five phones at the same time is the cleverest trick. Dual Bluetooth hook-up means simple hands-free calls. CarPlay and Android Auto are taken care of, plus screen buttons include Spotify. A top pick; if only it wasn’t let down by some tricky menus.

Buy it from Car Sounds and Security here 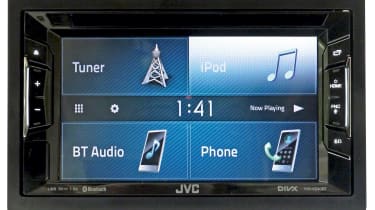 JVC and Kenwood are sister brands, so similarities between this 6.2-inch screen and the DDX4018DAB are no surprise. But you can save if you don’t want DAB. A front-only USB port is another low-budget clue. Still, this also allows up to five phones to stream at once via Bluetooth. Apple hook-up was seamless, but Android pairing was hit and miss. 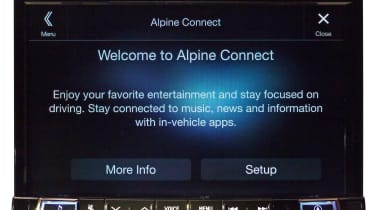 Expensive eight-inch Alpine is a great kit with DAB and built-in nav. It has Can-bus interfacing suitable for parking display and HDMI input and outputs for TV. Apple CarPlay is built in, but you have to turn it on before plugging in. While Android Autp works, for full functionality you need the Alpine Connect app. Bluetooth audio quality was well above average.